SHELL-SHOCKED Scott Brown revealed what referee Kevin Clancy said to him after he had been decked by an elbow from Jon Flanagan at Ibrox this afternoon.

The Celtic skipper was lining up in the penalty box as the champions tried to fight back into the game, losing at that stage 1-0 to James Tavernier’s speculative free-kick inside two minutes.

Callum McGregor raced to take the right-wing award in the 51st minute when Flanagan clearly fired an elbow into the face of Brown who hit the deck.

Match official Clancy saw the incident and thought a yellow card was sufficient punishment for a foul with the ball not even in play.

Alfredo Morelos was dismissed for a similar assault on the champions’ skipper during the Hoops’ 2-1 win in March when Bobby Madden was in charge.

Brown, speaking to the Daily Record, said: “Another one to the face.

“Surprisingly, somebody didn’t see that again.

“But there’s always a linesman there who can see it from the corner flag. 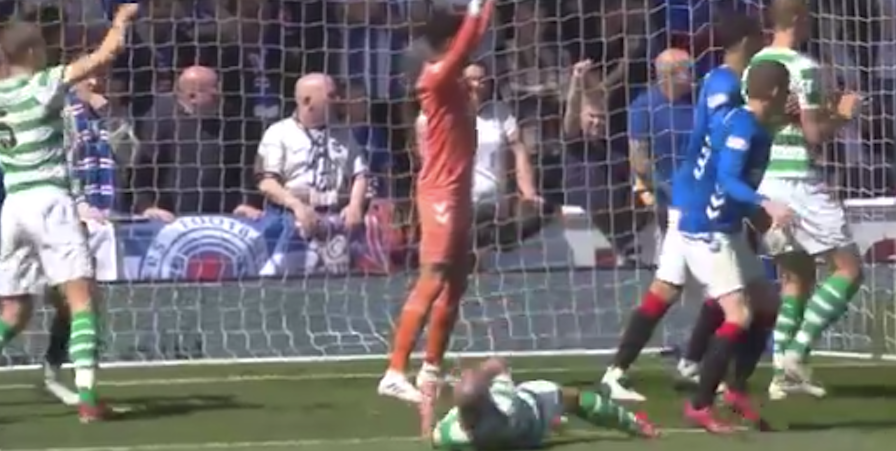 DECKED…Scott Brown collapses to the ground after being elbowed in the face by Jon Flanagan.

“There are two people there, both said they didn’t properly see it, so it’s a hard one for them.

“He (Clancy) said it was a yellow because it didn’t hit me in the face. But it’s part and parcel.

“At the end of the day, it wouldn’t have changed the outcome.’

It was an honest assessment from Brown as he saw his team lose their second consecutive game at Ibrox following the 1-0 loss in December.

It was an action replay of the inept display before the turn of the year that brought the side their first reverse on the domestic front in 2019,

A summer of upheaval is clearly ahead with players coming and going and heavy investment will be required to rejuvenate a squad that looked tired at Ibrox with Scott Arfield to run through and score the killer second goal.

Before then, though, the club can make history yet again when they face Hearts in the Scottish Cup Final at Hampden on May 25 where silverware success will seal the unprecedented treble treble.

But Neil Lennon knows he must get them to a better level than this performance if there will be celebrations at the national stadium.