Celtic Quick News on News Now
You are at:Home»Match Report»CELTIC 1 RANGERS 2: LETDOWN AT THE END OF A MEMORABLE DECADE
By CQN Magazine on 29th December 2019 Match Report

SLOPPY Celtic brought down the curtain on a memorable decade with an instantly forgettable performance at Parkhead this afternoon.

The eight-in-a-row champions didn’t turn up against Steven Gerrard’s Ibrox visitors in a shocking display. Right from the off, the home side looked to be struggling and just could not pick up the pace of the game.

A few players should spend the mid-winter break having a look at themselves. Scott Brown, Jeremie Frimpong, Christopher Jullien and Callum McGregor gave their all, but others were simply anonymous.

There is no need to panic, though. Admittedly, a massive psychological boost has been handed to the Govan side. To be fair, they worked hard throughout the 94 minutes.

They completed the encounter with 10 men after serial diver Alfredo Morelos was sent off in stoppage time after one theatrical fall too many.

The winning goal came from a corner-kick and emphasised Celtic’s frailty in dealing with deadball situations. They have conceded far too many goals from set-plays and once again Kristoffer Ajer – as happened against Aberdeen’s Sam Cosgrove – was outjumped by Nikola Katic from a Borna Barisic left-wing corner-kick in the 56th minute.

The Norwegian was slow to react and the Croatian thumped an effort behind the static Fraser Forster. 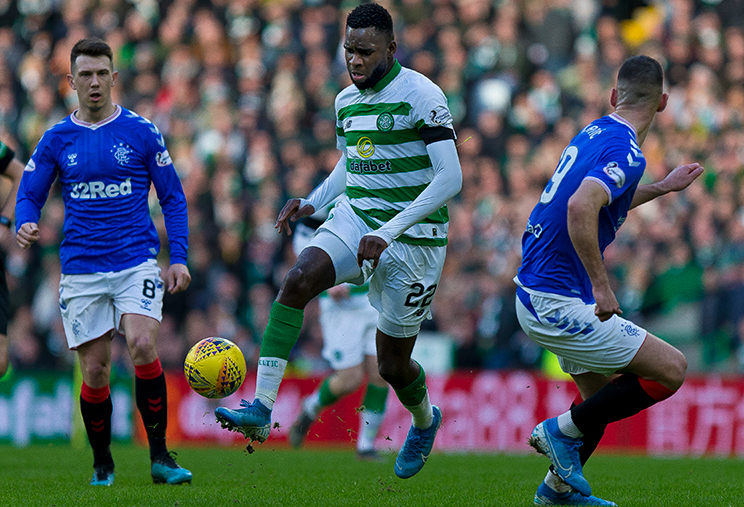 ON THE RUN…Odsonne Edouard takes on Ryan Jack and Nikola Katic.

It was fast and frantic in the first-half where the champions looked strangely subdued for lengthy periods in the game. The passing was dodgy and there appeared little cohesion in their play.

Ryan Christie even passed up the opportunity to open the scoring from the penalty spot in the 32nd minute after referee Kevin Clancy spotted a blatant tug on Christopher Jullien’s shirt by desperate defender Katic who was also booked for his efforts.

Christie, who missed a spot-kick in the 4-1 win over Ross County in Dingwall earlier this month, fired the ball low to Allan McGregor’s left-hand corner of the net, but the keeper guessed correctly and got down to push the effort to safety.

Four minutes later, Steven Gerrard was celebrating when his side took the lead with a simple break up their left wing.

Barisic picked out Ryan Kent with a low pass and the former Liverpool winger hit a first-time left-foot drive beyond the helpless Forster with the ball smacking off his right-hand post on its way into the net.

Just moments before that, Steven Davis denied Jullien a goal when he managed to clear his attempt off the line after the French defender launched in a goalward-bound header beyond McGregor from a Christie left-wing corner-kick.

The Hoops got the leveller in the 41st minute after a McGregor drive deflected off Edouard to leave the Ibrox keeper motionless.

The visitors claimed for handball by the French ace, but there was no way it was intentional and the match official, correctly, waved away their pleas.

Celtic failed to take advantage and blundered their way through a second-hlaf that sees them two points ahead in the Premiership, but the Ibrox club now have a game in hand.

The nearest they came to a goal in the second-half was a Jullien header from a Christie corner-kick that was once again cleared off the line by Davis.

Lennon put on Olivier Ntcham, Nir Bitton and Leigh Griffiths for James Forrest, who rarely showed, Mikey Johnston and Christie as he attempted to claw back something from the game.

It was not to be day the champions’ day, though.

Griffiths had one chance from a free-kick, but, typifying Celtic’s performance, he fired it waywardly over the bar.

It was a sad end to a decade that has seen the club win 10 successive domestic honours, but this outing is best forgotten.