CHRIS SUTTON insists Celtic will be the “losers” if the SPFL season is declared over.

The former Hoops striker laments the fact Neil Lennon’s side could miss out on a potential quadruple treble if the campaign is called to an emergency halt in the midst of the coronavirus pandemic.

The champions will be crowned champions for the ninth successive year under SPFL proposals to pull the plug on the 2019/20 term.

The Parkhead side had a 13-point advantage at the Premiership pinnacle with a superior goal difference of plus 25 and only eight games to play when football went into cold storage in the middle of last month.

The Betfred League Cup was won with a 1-0 triumph over Steven Gerrard’s Ibrox outfit at Hampden on December 8 and the holders were due to play Aberdeen in the Scottish Cup semi-final at the national stadium on Easter Sunday.

Celtic were three hours away from a fourth successive silverware clean sweep in Scotland – and could now be denied the opportunity to add the Scottish Cup to their domestic achievements during these unprecedented times.

Sutton, speaking on BBC Live, said: “I think Celtic are the team who are going to lose out in all this.

“If they shut the season down, Celtic are going to miss out on the chance of another treble, aren’t they?

“If they shut the season down, there will be no Scottish Cup, so they’ll lose out on that opportunity.

“I’ve lost how count of how many trebles they’ve won, so Celtic are the losers in all this.”

There is a school of thought, though, that the new season could kick off with the last-four Cup-ties between the Hoops and the Dons and Edinburgh rivals Hibs and Hearts.

They are potential moneyspinners and the 2019/20 Cup could be settled in the first week of the campaign with the 2020/21 trophy starting on the following January or February.

Celtic, of course, brought down the curtain on a third successive spectacular season on May 25 at Hampden last year when two goals from Odsonne Edouard cemented a dramatic comeback against stubborn Hearts to lift the Scottish Cup.

Sutton was making his comments on a dramatic day with the Scottish football bosses issuing a proposal to end the Championship, League One and League Two campaigns based on points-per-game average, as CQNreported. 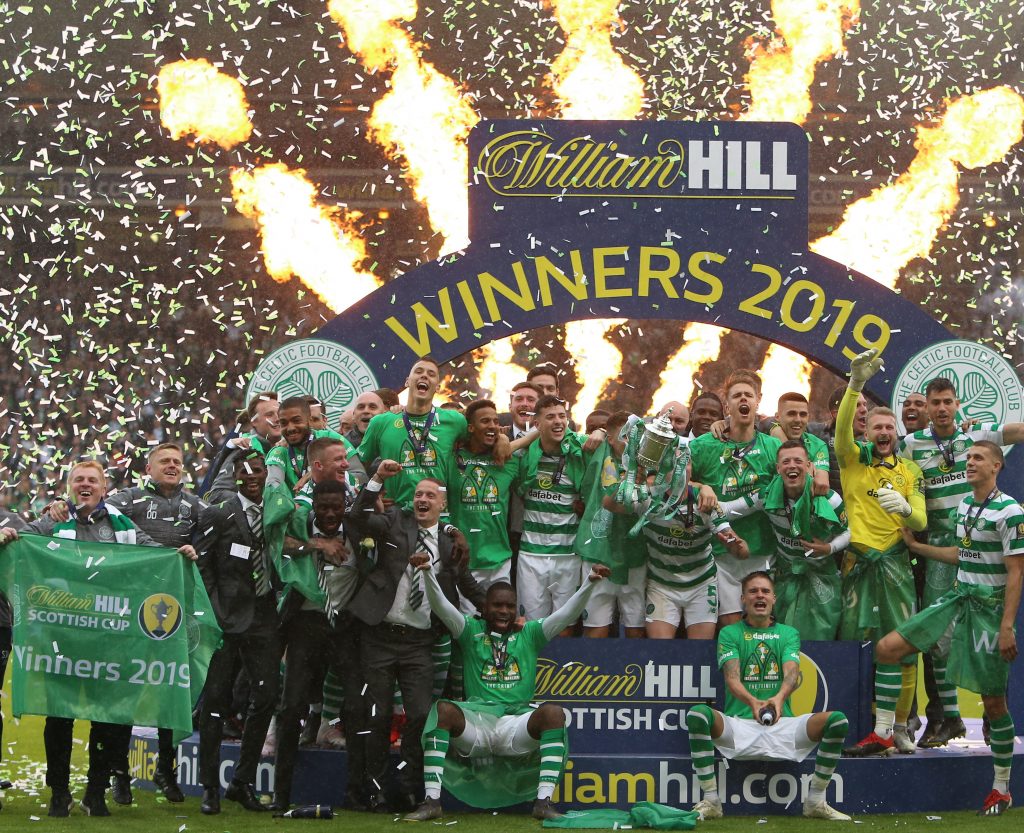 GRAND FINALE…Celtic bring down the curtain on their treble treble triumph on May 25 last year following their Scottish Cup success against Hearts.

The one-time England international forward also discussed the situation in which some clubs are facing financial collapse during the lockdown.

He added: “Clubs in Scotland need to look after each other and allow clubs to survive.

“How can you expect, in these times, for people to fork out on season tickets for next season? There’ll be supporters of some teams who don’t know which league their team will be playing in.

“How can you fork out on that? That’s why it’s so difficult and there is no perfect decision, of course there’s not.

“Scotland’s totally different to England, but there are a lot of clubs fretting because they know if this carries on, this is serious, this is real.”