CELTIC are in pursuit of winger Kyle Edwards who has left West Brom at the end of his contract.

The Hoops are keen to add the 23-year-old Englishman to their squad after raiding the English market already this summer to bring in Sheffield Wednesday’s 20-year-old double-act Liam Shaw, a versatile midfielder, and central defender Osaze Urhoghide.

Edwards was on the club’s radar in January with Neil Lennon attempting to finalise a loan deal, but the move didn’t get off the ground. Now Celtic will reignite their interest in the player.

The Hawthorns outfit announced in a statement Edwards had quit following the expiry of his deal along with one-time Parkhead target goalkeeper Andy Lonergan, Hal Robson-Kanu, Charlie Austin and a handful of fringe players. 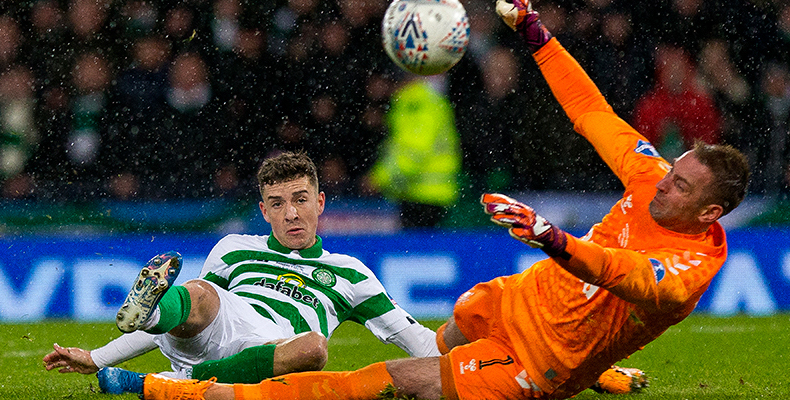 MISSING OUT…Mikey Johnston clips the ball wide of Allan McGregor and the post in the 2019 Betfred League Cup Final which Celtic won 1-0. Last season, though, was a virtual write-off for the tricky winger.

As in the case of Shaw and Urhoghide, Celtic will have to pay around £300,000 in compensation to the Midlands club for training and development of the wide man.

Edwards has made almost 50 first-team appearances for the Baggies with five in the Premier League last season in which he scored four goals.

The Hoops have struggled to find a long-term replacement for Scott Sinclair who quit for Preston North End in January last year.

Mikey Johnston was earmarked for the role, but the Scotland Under-21 star’s campaign last time out was decimated by injury.

Edwards could be the player to solve the side’s problem in this area. They are no longer able to call on the services of left-sided attacker Mohamed Elyounoussi who has returned to parent club Southampton after his two-year loan stint in Glasgow.