Celtic Quick News on News Now
You are at:Home»Latest News»DEMBELE EXIT ‘GOOD FOR ME,’ CHRISTIE
By CQN Magazine on 6th September 2018 Latest News

The bulked-up Highlander, who has spent the last 18 months on loan at Aberdeen, thinks the French striker’s move to Lyon could open the door at the Hoops.

Christie, 23, admitted: “From a selfish point of view, it is quite good for me.

“When I first joined (from Inverness Caley Thistle in 2015), I was still young and when I went away to Aberdeen I was quite small in stature.

“It’s hard for me to notice it, but since I’ve come back, people I’ve not seen in a whole year, are aware of a difference in me. 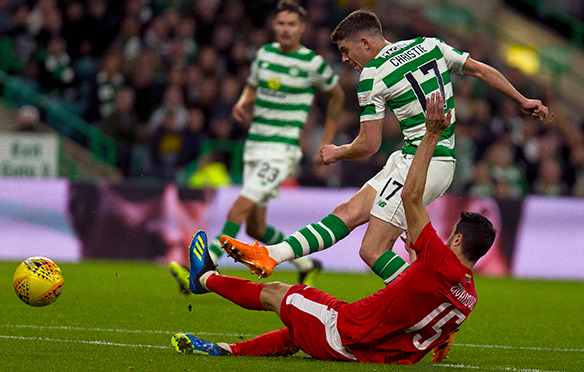 BY THE RIGHT…Ryan Christie crashes in a shot against FK Suduva.

“That’s always good to hear that gym work is paying off. It only benefited my development going up there and it’s put me in a right good stead.

“I look back at photos when I first joined Celtic and I look like a wee boy in comparison to what I look like now.

“We get our fat tested every day and I’ve managed to keep that down, so, hopefully, it means that’s muscle that I’m putting on.

“The sports scientists at Celtic – and even when I was away with Aberdeen – are always on me every other week to make sure I’m still doing my gym programme. It’s benefiting me massively.”

Christie came on as a second-half substitute for Tom Rogic in the 1-0 win over Sevco Rangers on Sunday.