NEIL LENNON admitted it was “disappointing” to discover a banner had been unfurled outside Parkhead today calling for his resignation.

But the defiant Celtic manager insisted he will not be engaging with the situation although he admitted “fans are entitled to their opinion”.

Lennon, who is 90 minutes away from becoming only the fourth manager in the club’s history to win a treble following Jock Stein (twice), Martin O’Neill and Brendan Rodgers, has seen his side slump 11 points behind in their quest for the historic 10 in a row, but they have two games in hand and is adamant no-one is pressing any panic buttons.

The Hoops boss, who is preparing his players for tomorrow night’s Europa League Group H game against Sparta Prague in the Czech Republic, told the Daily Record: “It is disappointing, but fans are entitled to voice their opinion. Whether I agree with it or not is irrelevant, they have put it out there.

“It’s something that I am not really going to engage with. I’ve got a job to do here and I think I’ve done it pretty well since I came back in.” 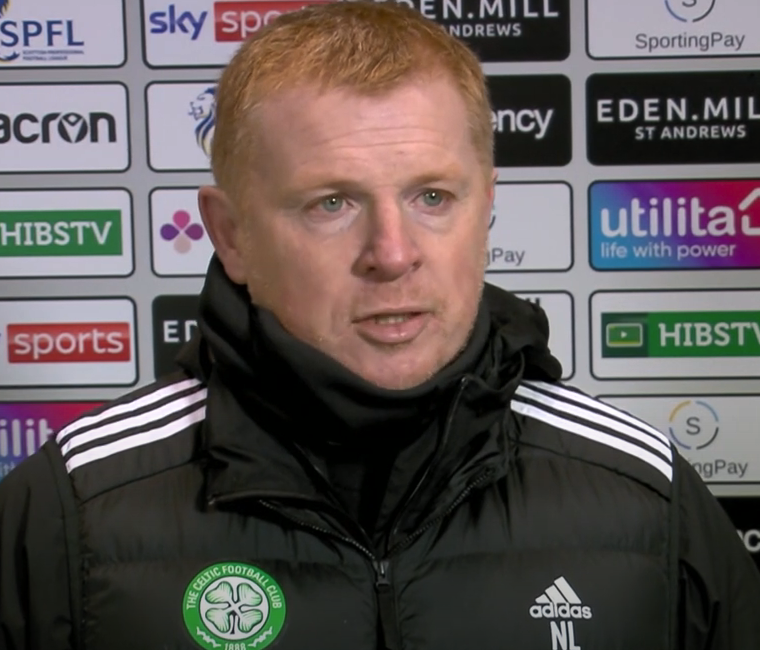 IN FOCUS…Neil Lennon talks to the media after the 2-2 draw at Hibs.

Lennon added: “Obviously, all of us are not happy with the way things are panning out at the minute.

“But there is a calmness about Peter (Lawwell) and the board. There’s no panic. We have been over the course and distance many times before.

“I speak to Peter every day. He is very, very supportive, as he is with the players and my backroom team, as well.

“So, it is as you are, let’s get improvement, let’s get some wins, let’s play the type of football we know we are capable of, which we showed in the last 20 minutes at Easter Road, and we will be absolutely okay.”

Celtic face Ross County at Parkhead on Sunday as they kick off the defence of the League Cup they have won for the past four seasons before they take on AC Milan at the San Siro a week tomorrow in another European encounter.

They then have St Johnstone, Lille and Kilmarnock in quick succession before they play Hearts in the delayed Scottish Cup Final at Hampden on December 20.

A victory will bring Lennon his first clean sweep of domestic honours – and Celtic’s TWELFTH successive silverware over an unprecedented four-year spell of domination in Scotland.