The Celtic striker is in the final year of his contract and the clock is ticking on His inevitable move from Parkhead. There are now only 16 shopping days until the window closes on the current market place.

The Hoops hierarchy are demanding something in the region of £20million for the 23-year-old marksman who cost a club record fee of £9million when he joined from Paris Saint-Germain in June 2018. The French giants are believed to be due a whopping 40 per cent of any profits on his next move.

However, Edouard’s personal financial demands start at a staggering £85,000-per-week, according to a report in the Scottish Sun on Sunday.

STEADY…Edouard attempts to flick the ball over the Czech No.1. 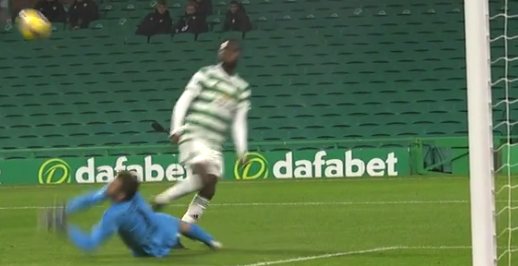 NO…Edouard is thwarted by Hanus, but James Forrest followed up to net the third goal.

Brighton boss Graham Potter is an admirer of the player, but the required wages may be too steep for the south coast club.

French outfit Nice have also been linked with Edouard and could tempt him back to his homeland, but, once again, the cash could prove to be a stumbling block.

The frontman, who struggled in the first half of las season as the team lost its way during what could have been a historic campaign, completed the term with 22 goals, but he claimed a mere seven in the first four months of the crusade and three of them were penalty-kicks.

Ange Postecoglou has left him out of his last three starting line-ups with Kyogo Furuhashi leading the line and collecting four strikes in the process.

Edouard scored his first goal of the season with a spot-kick in the 6-0 win over Dundee at Parkhead last weekend.

He may be back on the substitutes’ bench for today’s League Cup opener against Hearts at Parkhead with the £4.6million Japanese hitman again getting the nod.

* DON’T miss the unbeatable match report on Celtic v Hearts this afternoon – only in your champion CQN.