Celtic Quick News on News Now
You are at:Home»Latest News»ERIK MAY FACE CELTS
By CQN Magazine on 9th March 2016 Latest News
ERIK SVIATCHENKO could face his Celtic team-mates when Denmark take on Scotland on March 29. 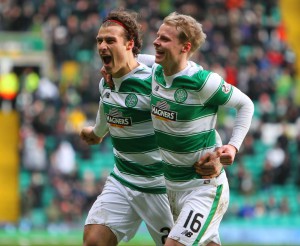 The 24-year-old centre-half, a £2million signing from Midtjylland in January, has been named in his country’s squad for the Tuesday night clash at Hampden.
Scott Brown, Leigh Griffiths and Craig Gordon are expected to be in Gordon Strachan’s pool of players for the friendlies against the Danes and the Czech Republic.
Keiran Tierney, Gary Mackay-Steven and Stuart Armstrong are three others who could be involved.
Sviatchenko made his international debut against the USA in March last year and has four caps. He scored his first goal for his nation in the 2-1 defeat against France in October.

He is joined in the squad by Leicester City keeper Kasper Schmeichel and Spurs midfielder Christian Eriksen.