JAMES FORREST faces a race against the clock to play in the Scottish Cup fourth round encounter at Ibrox.

The Scotland international winger claimed the breakthrough strike in the 6-0 win over Livingston yesterday before limping off in the second-half to create concern.

Forrest was starting only his second match since his ankle ligament surgery that kept him on the sidelines following the injury in the Euro tie in Riga in September.

The 29-year-old underlined his worth to the team the previous week when he again claimed the barrier-breaking goal in the 3-0 Scottish Cup victory over League One leaders Falkirk to set up the encounter in Govan.

John Kennedy admitted he didn’t know if the experienced campaigner will be fit for the confrontation with Steven Gerrard’s outfit as the Hoops prepare to go all the way to Hampden on May 22 in their attempts to stretch their record-breaking sequence of success in the national competition to five years. 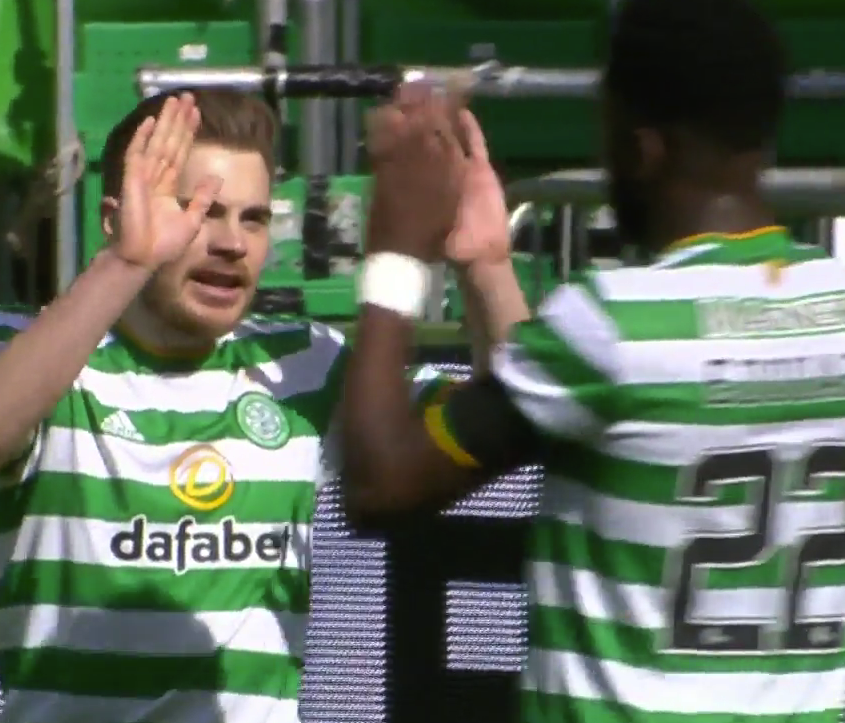 SIX APPEAL…James Forrest celebrates with Odsonne Edouard after scoring the opener against Livingston.

The caretaker gaffer, speaking to the Sunday Mail, said: “We are not quite sure yet on James. He stiffened up around his back and hamstring, so it was a case of not taking any risk with him.

“The scoreline allowed us to do that and give other boys game time.

“It’s too early to say about James for next week, we’ll have to assess him.

“When it’s general stiffness around the hamstrings, you usually concern yourself, but, hopefully, we got him off quick enough.

“With players coming back after so long out, you do get niggles which are a day or two in passing.”

Forrest was removed from proceedings in the 58th minute with Ryan Christie coming on in his place. The playmaker cemented his claim for a place at Ibrox with the sixth goal to bring down the curtain on the team’s most emphatic scoreline of the season.