The one-time England international, now a media pundit, didn’t hold back as he claimed UEFA tried to:

IGNORED the financial plight of the smaller nations, concentrated on the more wealthy countires and

FAILED in their leadership responsibilities during the coronavirus pandemic lockdown that has thrown football into chaos and confusion.

Sutton, speaking in the Daily Record, was clearly upset at the “shocking” missives coming from the Euro supremos.

He ripped into the so-called decision-makers: “UEFA are a reprehensible organisation.

“Their attempts to bully and push around smaller nations for their own gain is as disgusting as it is utterly shameful.

“Health over wealth is the mantra which a struggling world is living within at the moment.

“If you are in power in the corridors of that organisation in Switzerland, however, it’s only the wealth part that seems to matter.

“The fact they could cause serious harm and even cripple nations like Scotland with their playground bully actions only serves to heighten the sense of anger towards them.

“Telling clubs such as Celtic and Rangers their European places are in jeopardy if they go against what UEFA wants, and by doing what may ultimately help people in their own country, is quite shocking, frankly.

“The letter which was circulated to the member associations on Thursday night was a callous and low blow.

“It seems quite simple to me. Europe’s football chiefs know who fills their pockets with the most cash. Their slogan is EqualGame at a time when the inequality has never been more evident.

“It’s all about the big leagues of England, Spain, Italy, Germany and France. Their TV contracts and what they put into the market share dwarfs the rest of the countries.

“The glory, fame and massive sponsorship deals of the Champions League are all that concern them.”

Sutton continued: “This entire charade which has been in place over the past month has smelt of rats from the outset. The possibility of the huge contracts from TV not being honoured in those bigger leagues has sent an absolute shock wave through the clubs and their associations and had them running to clutch at straws. 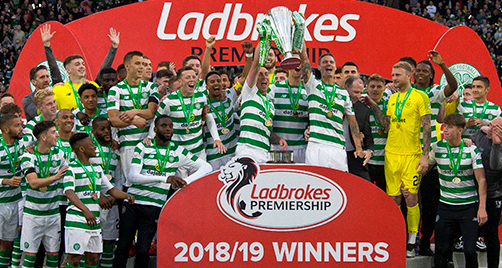 EIGHTSOME REEL…Celtic celebrate their Premiership title success last season. Now they must hold their breath to see if they will get the chance to make it nine in a row.

“You’d need to be blind not to see where their motivation has been from the outset. Desperate attempts to get games played when the whole world knows you can’t put a timeline on coronavirus.

“Fudging dates such as June for international play-offs. Handing out false hope and refusing to make concise and clear decisions. They are still doing it. Lacking leadership when the majority of their members needed it most.

“But, again, they don’t seem to be dealing for 50 of their members. Just for five of them.

“I’m not arguing that all of the associations want their leagues finished.

“Of course, they do. That’s what everyone wants. But sometimes you need to look at the bigger picture and realise there might be a better way.”

Sutton, who was Martin O’Neill’s first signing for the Hoops when he paid £6million to land him from Chelsea in the summer of 2000, also voiced concerns over playing games behind locked doors.

There are health issues for the players and it should also be remembered it will be virtually impossible to insure the performers in these confrontations.

He commented: “Do you really think the Belgians didn’t want to finish the Pro League? Of course, they would have. They wouldn’t have wanted to crown Brugge the champions when they hadn’t completed the games. No country wants that. 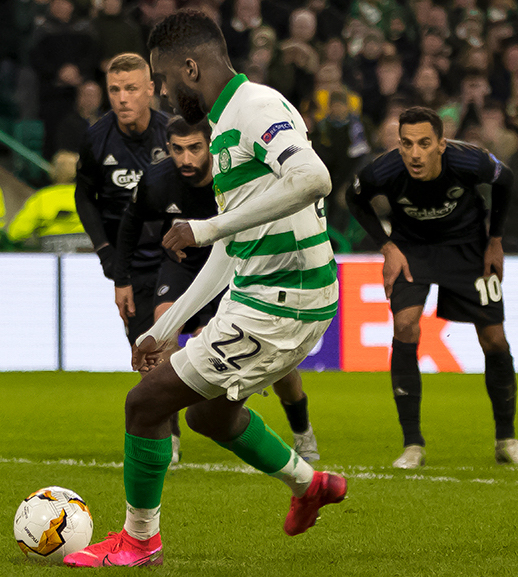 PAYING THE PENALTY….Odsonne Edouard prepares to score from the spot against FC Copenhagen during Celtic’s Europa League exit. The Hoops were also hit with a £13,327 fine by UEFA for an incident in the first leg.

“But listen to their reasoning. Reading the bulletins, the phrase used was that Belgian football chiefs rejected the notion of playing the remainder of the games behind closed doors as matches would still put pressure on to medical services and also agreed the risk of infecting players would also damage the competition’s integrity.

“How can you argue with that? How can anyone be threatened or taken to task when that is the approach?

“Yet, forget medical care and risk. That is what UEFA did within hours of the announcement from Belgium and that is because their cover had been blown and their little scam designed to save the big guns being brutally exposed.

“Let’s not forget one truly important thing here. Two of the countries at the centre of this, Spain and Italy, have amongst the highest death rates from Covid-19 anywhere on the planet. Did they even consider those facts?

“I’d be inclined to forget anything I see or hear from them. As far as I’m concerned, it’s all about greed.

“Sporting integrity? Doing it for the right reasons? Do me a favour. This is an organisation who spent the start of this week dishing out stupid and pointless fines to clubs for games for kicking off a few seconds late.

“Taking money out of pockets at a time when everyone in football realises their economy is going to crash and clubs are going to be in serious trouble. UEFA are taking £10,000 here and £12,000 there. Farcical.

“Now they have put a gun to the heads of the smaller countries.

“Effectively, they are trying to take away the choice to do what might be right for each association and their clubs.”

Sutton added: “None of us knows what Scottish football’s exact plan is at the moment. But we do know the clubs are crying out for some form of clarity in the hope of getting payments into the bank to see them through this crisis.

“By doing what they have done, UEFA have added another layer of complication to the issue when they should be doing exactly the opposite and providing assistance. Effectively, they are telling Celtic, Rangers, Motherwell and Aberdeen to stand on the throats of other clubs in Scotland because, if they don’t, their Champions League and Europa League places will be taken away for next season.

“That’s what that letter has really said. Do you really think UEFA are bothered by how leagues are finished in Slovakia, Slovenia or Scotland? All that concerns them is what happens in England, Spain, Italy and Germany and, if anyone steps out line, they’ll be dealt with accordingly.

“You see the true colours of people when the chips are down. You see who is going to dig in for the greater good and who is going to hide or put their own self interest first. We are seeing it here from Nyon.”