The Hoops boss chalked up another notable seven at Easter Road this afternoon, but there is no way the Irishman will look back on it fondly.

The lapse against Neil Lennon’s Hibs side was only his seventh domestic defeat in 114 games since arriving at Parkhead two-and-and-a-half years ago.

Christmas came early for the Edinburgh men as the champions gift-wrapped the points in a dire display in the Capital.

Last season, Celtic dropped five points on the same ground and today they carelessly tossed away another three.

Lennon’s men were slicker, quicker and more determined than a Parkhead team that was flat right from the kick-off and just couldn’t raise their levels to meet the enthusiastic challenges of opponents who had won only one of their previous eight games before this meeting. 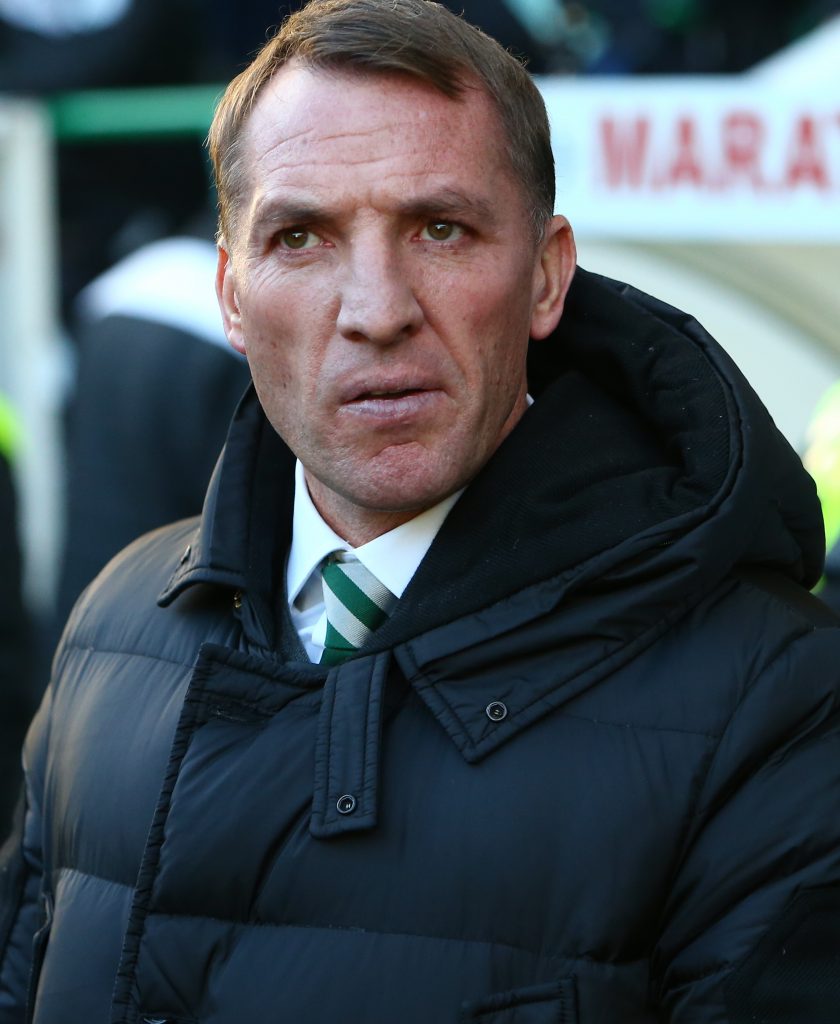 A frustrated Rodgers threw on three second-half substitutes in Lewis Morgan, Jonny Hayes and Mikey Johnston, but there was still very little to inspire his players on a real off-day.

They went into the game as the only team in Scotland or England not to have conceded a league goal in the first-half of a game this season.

That proud record was dynamited in only 46 SECONDS as the home side cut through their defence with embarrassing ease to present Vykintas Slivka with the opportunity to practically saunter past Jozo Simunovic before slotting an angled left-foot drive away from the exposed Craig Gordon.

It was an awful goal to concede so early in an encounter that always promised to be a tough assignment against a Lennon outfit that were only too happy to roll up their sleeves and battle and fight for every ball with ferocious verve and vigour.

Like RB Salzburg on Thursday, they were prepared to swarm all over the midfielders and little was seen of Callum McGregor, making his 200th appearance, or Olivier Ntcham.

The passing throughout the team in the opening 45 minutes was dreadful and the ball was continually given away and possession surrendered all over the pitch. 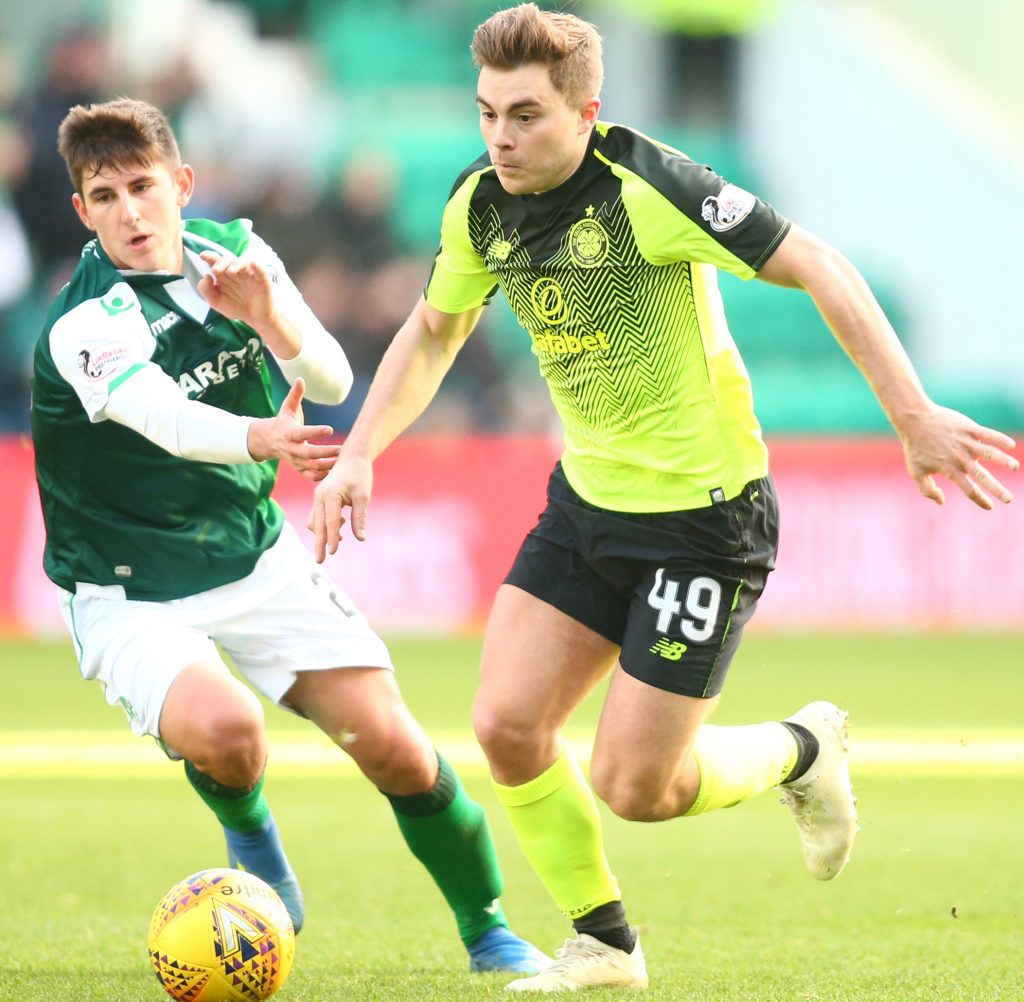 ON THE RUN…James Forrest races away from Hibs’ Emerson Hyndman.

Even James Forrest, on fire in recent months, was struck by the malaise as was highlighted in the 38th minute following a slip by Ryan Porteous that allowed him the opportunity to race in from the right.

Odsonne Edouard was ideally placed for a pass in front of goal, but the Scotland international star’s wayward cross went straight to Efe Ambrose who hoofed it to safety.

The loss of the early goal in such circumstances clearly rattled the champions who were finding it difficult to compose themselves and find any shape to their game.

Scott Sinclair was deployed to the right flank at the start with Forrest playing more through the middle. It was a switch that didn’t work in the opening 45 minutes.

To be fair, the Englishman was a willing worker, but his passes, like those of his team-mates, were going astray far too often.

Hibs keeper Ofir Marciano was hardly troubled during that spell and the only time he was required to look lively was in the 21st minute when Edouard moved onto a slide-rule pass from Forrest, but the Frenchman curled his effort over the bar from 20 yards.

The Hoops, though, were well off the pace against lively opponents with no-one providing a spark of invention and Edouard looking isolated up front.

Two minutes after the turnaround, Sinclair posed a threat with a lobbed effort from 12 yards, but Marciano managed to claw it away for a corner-kick. 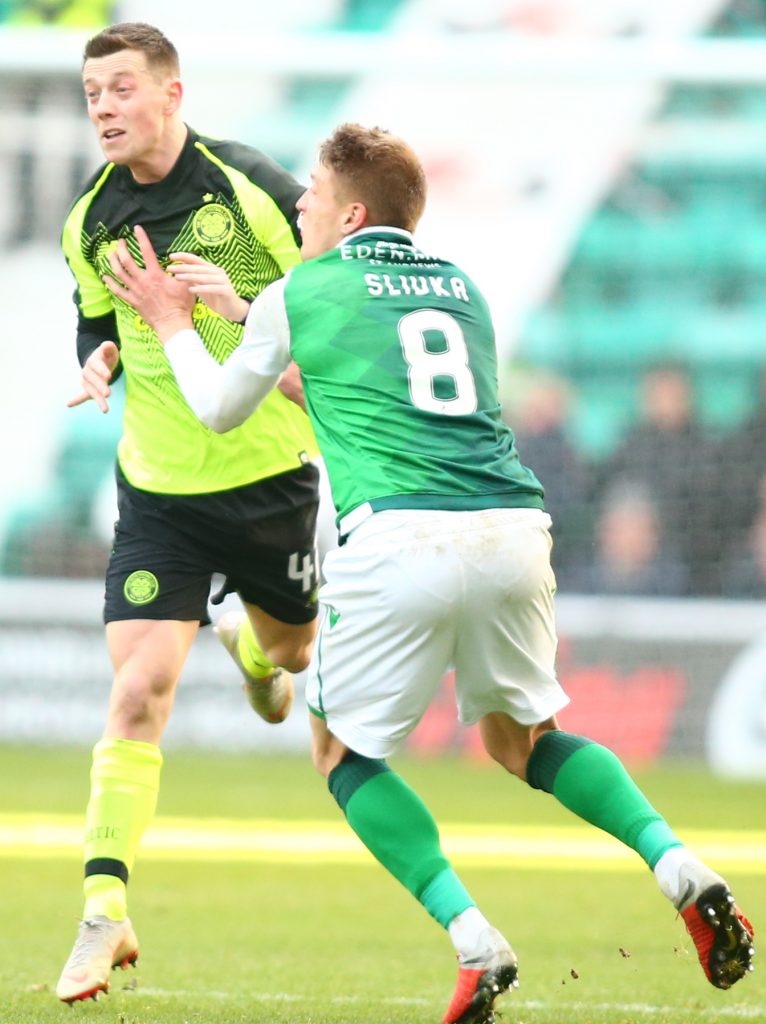 In the 57th minute, the keeper was brought into action again as he threw himself to the right to punch away a drive from Forrest.

Two minutes later, it was all over as the home side doubled their advantage with a remarkably simple goal that exposed the flaws in a fragile Hoops rearguard.

Lewis Stevenston robbed Sinclair of the ball and it was worked forward to substitute Sean Mackie who picked out Florian Kamberi with a sweeping crossfield ball.

There was no sign of Emilio Izaguirre as the Frenchman took the ball on his chest, raced into the box and finished with a vicious drive over Gordon into the roof of the net.

On this occasion, Celtic had no answer. Edouard, looking ponderous at times, Sinclair and Izaguirre were withdrawn, but there was no way the complexion of this encounter was going to change dramatically.

The last chance came and went when Johnston, following some neat footwork on the right, set up Morgan, but he screwed his finishing shot wide from eight yards.

It summed up perfectly an afternoon of missed opportunities.