Celtic Quick News on News Now
You are at:Home»Latest News»‘I COULDN’T HAVE ASKED FOR ANY MORE,’ ADMITS RODGERS
By CQN Magazine on 12th December 2018 Latest News

BRENDAN RODGERS is satisfied Celtic are in control of their destiny as they prepare for the final Europa League Group B encounter against RB Salzburg at Parkhead tomorrow night.

After back-to-back triumphs over RB Leipzig and Rosenborg, the Hoops require only one point against the unbeaten Austrians to make certain of a place in the competition after the turn of the year.

Rodgers said: “I couldn’t have asked for any more, really, to arrive into the last game with it in our own hands.

“We know it’s a difficult task – and we respect that they’re a good team who’ve won every game they’ve had so far in the group – but we couldn’t ask for any more. 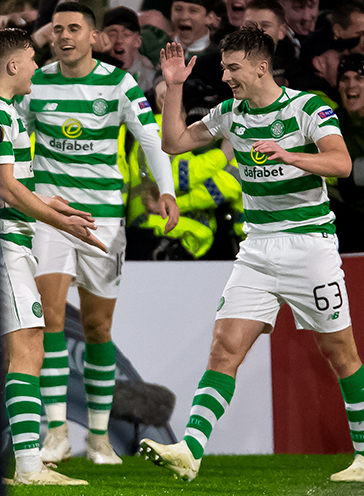 THE OPENER…Kieiran Tierney is congratulated by James Forrest and Tom Rogic after his goal against RB Leipzig. 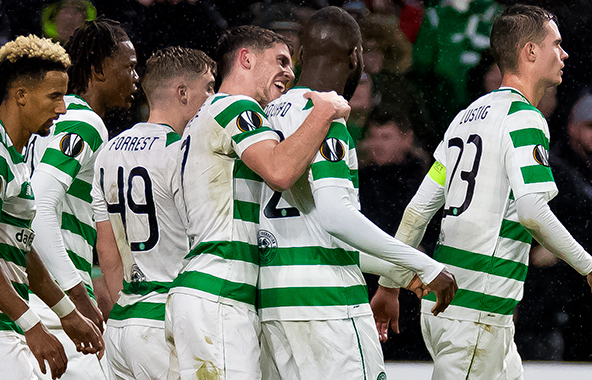 THE CLINCHER…Odsonne Edouard gets a hug from Ryan Christie following his winning goal against the Bundesliga outfit.

“Hopefully, with the Celtic Park crowd at their best and the players performing we can get over the line.

“It was a top-level performance and result against Leipzig. It got to 1-1 and it could have been another good performance, but we didn’t quite win.

“However, we kept going, got there in the end and it was absolutely fantastic.

“Rosenborg was also a good win for us, so it’s now in our hands and it’s up to us to go and deliver.”

Parkhead was rocking in the game against Salzburg’s Red Bull stablemates Leipzig last month where it looked as though victory would be snatched when the Bundesliga big spenders levelled Kieran Tierney’s first-half opener.

However, Rodgers’ men produced a stunning reply by claiming the winner in a matter of SECONDS following the restart of the game.

The ever-improving Ryan Christie burst into the box before slipping a ball across goal that was calmly knocked over the line by Odsonne Edouard, who proved his £10million status against the German outfit.

A repeat tomorrow night would be well received.

* Rodgers was speaking to this week’s Celtic View, on sale now.