FC Midtjylland, a workmanlike side at best, joined AEK Athens, Cluj and Ferencvaros in the recent past to bring about the big-time downfall by firing the Hoops in among the also-rans before Europe’s elite competition gets properly underway.

Postecoglou watched his side offer feeble resistance in extra-time against the Danes when they conceded the second goal in four minutes and couldn’t muster a solitary shot on target in the remaining 26 minutes to try to claw their way back into the contest.

It made for some desperate viewing for the fans as another opportunity to make a mark among the big boys was blown in the usual tortuous circumstances. 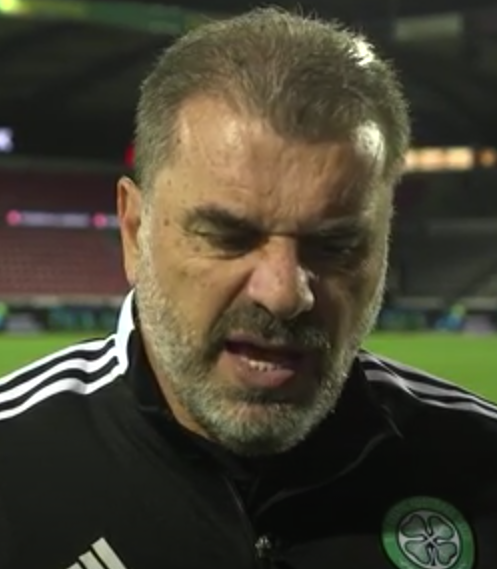 DEJECTED…Ange Postecoglou gives his verdict after the Champions League exit.

Postecoglou suggested he might not have been forceful enough in his demands to the board for new signings and Liel Abada, the £3.5million teenage Israeli winger, was the only acquisition who played in the ties with £4.5million Carl Starfelt and £4.6million Kyogo Furuhashi still unavilable although the Swedish central defender and the Japanese striker will be in contention very soon.

Postecoglou, whose team will now meet Czech side Jablonec in the Europa League qualifier, said: “I take responsibility. I’m the person who has been put in charge. We haven’t got players in, I obviously haven’t done a good enough job convincing people we needed to bring people in.

“I’m not going to shy away from it. I don’t say that because I’m some kind of martyr, I just think that’s my responsibility, that’s why I was brought in.

“I have been trying to be as forceful as I can about what we need to bring in and the challenges we have had are well chronicled.

“Irrespective of the result, we still need reinforcements. We had a really young squad out there, young players on the bench. It’s not a situation we need to be in.”

The manager, speaking to Sky Sports News, continued: “I think I have been pretty consistent in saying we need more players. The club is working hard to get those players in. I have talked endlessly about the challenges we face.

“Our supporters just want to see us bring in the reinforcements that we need and I have just got to keep reinforcing my views on it as strongly as I can.” 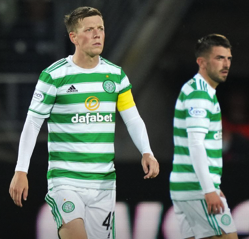 GRIM-FACED…Callum McGregor and Greg Taylor after the Danes make it 1-1.

Captain Callum McGregor struck a sweet volley to hand the Hoops the lead three minutes after the turnaround, but substitute James Forrest, who had just come on as a substitute, then contrived to pass up a glorious chance to make it 2-0 on the hour mark when he trundled a shot wide of the post from 12 yards.

Within a minute, the opposition had equalised when Greg Taylor, who struggled throughout until he was replaced in extra-time by Adam Montgomery, failed to pick up Awer Mabil  who sneaked in to head beyond the exposed Scott Bain.

Remarkably, the Parkhead men offered nothing in response after going behind four minutes into added-on time when the lacklustre David Turnbull was slow to spot danger which saw Raphael Oneynika hit the winner from six yards.

Postecoglou added: “I can’t fault the effort of the players, they worked their socks off.

“We controlled the game, scored, had a good chance to go 2-0 up and straight away they scored and we lost a bit of momentum. We just looked a bit tired in the end and lacking a little bit of energy to get back into the game.

“Big moments cost us. Moments change games and we had some pretty good moments.

“That’s frustrating, but when you look at the back four we put out there, the average age of those boys, it was an enormous effort to keep us in the tie.”