KRISTOFFER AJER bade an emotional farewell to Celtic after sealing his £13.5million deal to Brentford yesterday.

The Norwegian international central defender, who joined the Hoops for £750,000 from FK Start in May 2016, had made it clear he wanted to quit Glasgow this summer, despite still having a year to run on his contract.

Ajer, 23, has swapped 60,000 Celtic Park for the 12,763-capacity Griffin Park to continue his career at the newly-promoted Premier League club.

Following the completion of his five-year deal, the versatile back-four operator took to Instagram to say: “5 years ago I travelled to Glasgow not knowing what to expect. The stories I got told seemed incredible, but the very first time I walked out at Celtic Park I truly understood how big a club Celtic really is. 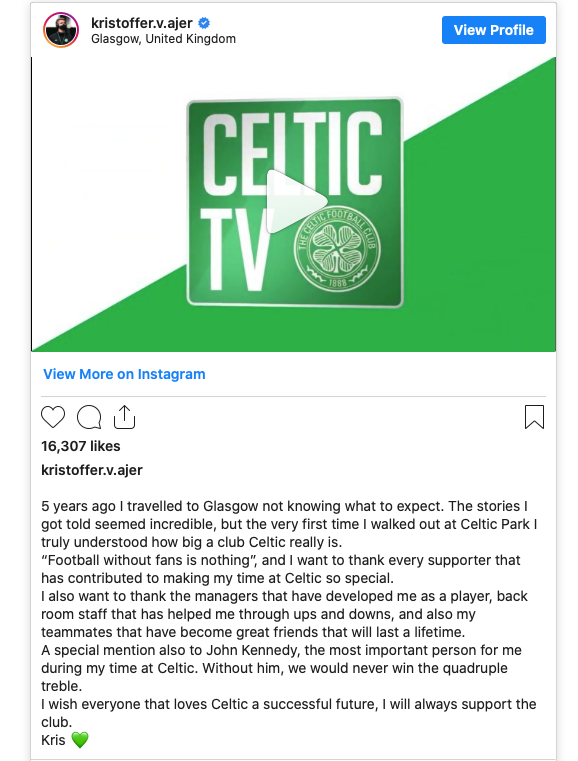 “‘Football without fans is nothing’, and I want to thank every supporter that has contributed to making my time at Celtic so special.

“I also want to thank the managers that have developed me as a player, back room staff that has helped me through ups and downs, and also my teammates that have become great friends that will last a lifetime.

“A special mention also to John Kennedy, the most important person for me during my time at Celtic. Without him, we would never win the quadruple treble.

“I wish everyone that loves Celtic a successful future, I will always support the club.”

HISTORY BHOY…Kristoffer Ajer belts in the penalty-kick that secured the sensational quadruple treble.

Ajer will always be remembered as the player who blasted in the decisive penalty-kick against Hearts in the Scottish Cup Final in December last year that made certain of the phenomenal quadruple treble for Celtic.

The bruising battle against the stubborn Tynecastle outfit had been deadlocked at 3-3 after extra-time and rookie keeper Connor Hazard had given Neil Lennon’s men the advantage with two superb stops.

It all came down to Ajer as he faced his former Hoops team-mate Craig Gordon in a tense moment at Hampden. There was never any doubt as to the destination of the ball as soon it blurred its way from the Celt’s right boot. Four years of domestic domination with the spectacular haul of 12 trophies to prove it was achieved in that moment.

Now the player and the club have parted ways. Such is life in football.