NEIL LENNON has dismissed criticism of his Celtic side as “a little bit of hysteria”.

The Hoops boss is not pressing any panic buttons after the reaction from all quarters after last week’s Champions League exit after a dreadful display against Cluj at Parkhead that saw the Romanians win 4-3 to go through on a 5-4 aggregate.

Lennon also saw his team struggle to overcome Championship side Dunfermline 2-1 with an extra-time goal from James Forrest to book a place in the League Cup quarter-final against Gary Caldwell’s Partick Thistle.

The Irishman is preparing his players for the Europa League first leg play-off against AIK Stockholm in Glasgow this evening and believes his team will answer the snipers.

Lennon, speaking to Sky Sports News, said: “It’s not me who is creating the headlines or shouting out the criticism.

“I’m very supportive of the players and was after Cluj and Dunfermline. We’ve lost one game – I didn’t believe we deserved to and that’s the harsh realities of the game.

“We’re fine. We’re absolutely fine. It’s like everyone out there is head down. We’re not. We’re bullish and looking forward to the games.

“There has to be a sense of perspective. I can’t control that, but there has been a little bit of hysteria at times. That is the environment you’re in in Glasgow sometimes.

“We’ve lost one game and scored three goals in it, so it’s not all doom and gloom.” 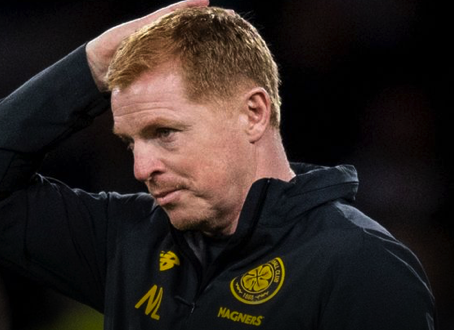 Lennon added: “We have to be bullish about things and look forward. It’s a big disappointment to be out of the Champions League, but the Europa League is a very good competition that, hopefully, we can prosper in.”

The Hoops have won through to the group stage of the Champions League or the Europa League every season since 2011 and Lennon believes it is vital his side maintain that record.

He added: “Obviously, the players want to show they have some European pedigree.

“We have the makings of a very good team and I hope that manifests itself.

“It’s important we get through. It gives us a gravitas, opens the season up and gives us European football to look forward to towards Christmas, so it’s an important couple of games.”