SCOTT BROWN was red-carded only five minutes after coming on as a substitute as Celtic hit the skids in West Lothian this evening.

The veteran skipper had just replaced Ismail Soro when he got involved in an incident with Jaze Kabia who went down as though he had been hit by an invisible bus. That was enough for referee Willie Collum to delve into his pocket and brandish the red under the nose of the captain.

Once again, the Parkhead men were lost in a winter blunderland as snow swept the stadium on an occasion when they picked up only their third point from a possible 12 and are still waiting for their first win in 2021 after four attempts.

It’s hardly championship-winning form and the players can only look at themselves. Their decision-making was appalling for most of the game, but it hit new levels of absurdity in the last 15 minutes or so.

In treacherous conditions, Nir Bitton, Shane Duffy and Greg Taylor decided to keep possession in their own half when it was obvious the pitch was an accident waiting to happen. It might have been a better idea to punt it into the other half and dump the problems on the hosts. 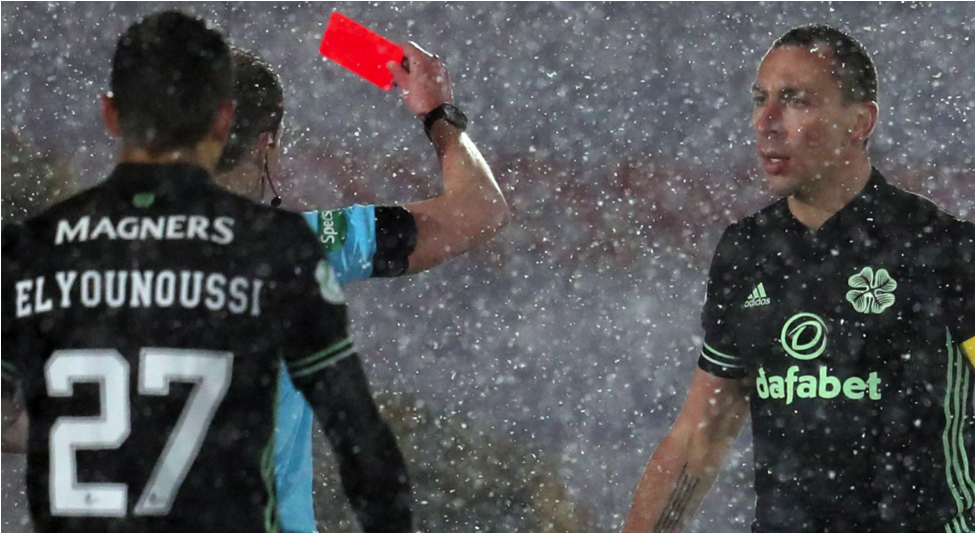 It took the loss of another dreadful goal from a free-kick to spur Celtic into action to recover and go in at the interval in front.

Livi took full advantage of the Hoops’ defence’s inability to deal with set-plays when they took the lead in the 15th minute. Duffy gave away a needless foul with a clumsy challenge on Jack Hamilton just inside the visitors’ half of the field.

Amazingly, Ciaran Brown was not picked up as the ball travelled some 45 yards over the heads of Bitton, Kristoffer Ajer and Duffy and the defender was allowed to race in at the back post and direct a 10-yard header down and away from the badly-positioned Vasilis Barkas who had strayed from the centre of his goal.

FREE HEADER…Cairan Brown knocks the ball past Vasilis Barkas who is out of position.

The Hoops, however, did respond and had the bulk of the possession without looking particularly dangerous. The cutting edge, the killer touch were both absent as the ball was given away at crucial moments or the pace on the pass was not quite right.

It looked as though their best hopes of a goal might rely on a set-piece of their own and that is exactly how they got back on level terms in the 28th minute following two dangerous corner-kicks.

David Turnbull sent the first one in from the left that saw Duffy get in a header at the back post that was smuggled behind after hitting Jon Guthrie.

Leigh Griffiths fired in the result kick from the right and Mohamed Elyounoussi arrived with perfect timing 12 yards out to first-time a vicious right-foot drive high past the helpless Robby McCrorie into the net via the underside of the crossbar. 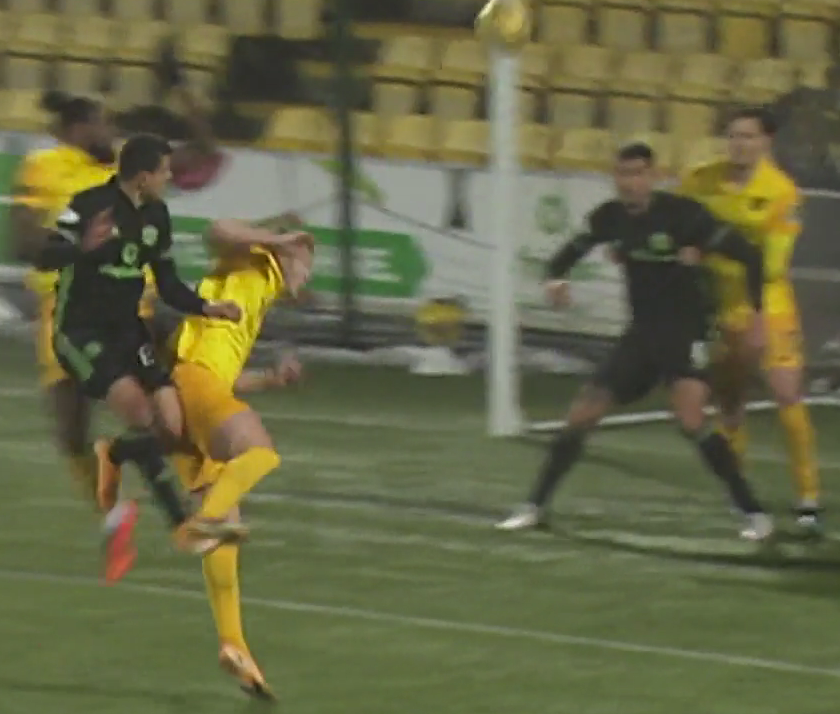 THE EQUALISER…Mohamed Elyounoussi fires in an unstoppable drive.

Lennon’s side went for the jugular in an effort to get a second goal and it duly arrived 10 minutes later and, astonishingly, it also came via a right-wing corner-kick.

Turnbull sent it in and it was cleared to Griffiths who touched it to Ismaila Soro who knocked it to Callum McGregor.

His through ball was a thing of beauty and Bitton was left in splendid isolation to take one touch before sending a left-foot drive hurtling into the roof of the net. It was the Israeli’s first goal in over FOUR years.

WHAM…Nir Bitton rattles in the second.

On the stroke of added-on first-half time, Ajer, who had been working tirelessly on the right, squandered the opportunity to grab a third.

He was sent clear by Turnbull and only had the keeper to beat, but lacked composure at the crucial moment and slammed the ball off the advancing McCrorie and the chance was lost.

In the 51st minute, Duffy knocked down a high ball from McGregor into the path of Elyounoussi and he attempted a clever angled effort that was sailing into the top left-hand corner until McCrorie managed to claw it away from under the crossbar.

On the hour mark, Livi equalised and once again they were gifted possession in the middle of the park. The ball was worked to Brown on the left who delivered a low cross into the box and Jay Emmanuel-Thomas turned it goalwards.

Barkas was once again rooted to the spot and the ball swept into the net. The Greek had two efforts on target to deal with all night and they both ended up behind him in the net.

We are still waiting for the £4.5million netminder to make a decent save.

As the second-half wore on, Celtic were guilty of gifting possession to their opponents, Turnbull among the culprits. 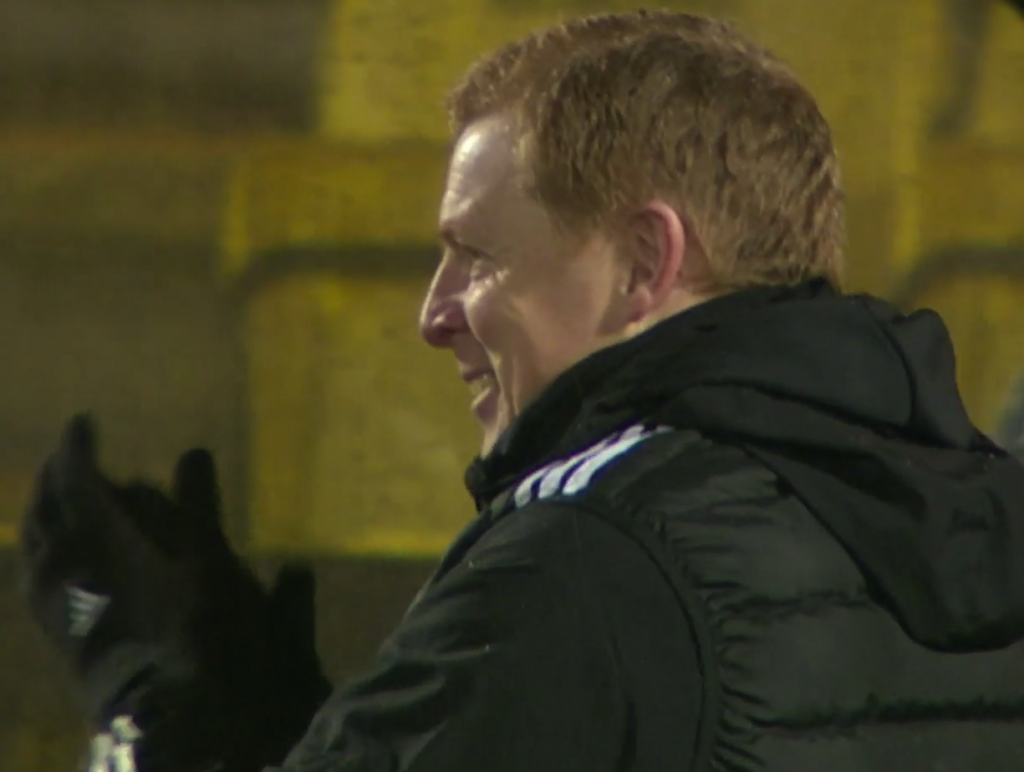 Lennon was forced to take off the limping Griffiths in the 69th minute to send on Patryk Klimala and the only thing the Pole did of notice was to dither on the ball in stoppage-time after being presented with a reasonable chance by Elyounoussi and Livi hastily booted clear.

Brown came on for Soro in the 78th minute and shortly afterwards left the pitch following his needless skirmish with an opponent. Jeremie Frimpong came on for Ajer at the same time and produced nothing of note.

Mikey Johnston then made an appearance for the toiling Turnbull in the 82nd minute, but it’s doubtful if he even got a meaningful touch of the ball.

It was another game to forget in a campaign packed with them.