Celtic Quick News on News Now
You are at:Home»Latest News»LUCKY BHOYS? ‘I THINK IT WAS DESERVED,’ INSISTS ANGE
By CQN Magazine on 29th November 2021 Latest News

It was all-square at Parkhead with the clock nudging towards the hour mark and the encounter was locked at 1-1 following Filipe Jota’s opener and Lewis Ferguson’s controversial penalty-kick equaliser.

The Hoops could not afford to shed points as they play catch-up at the top of the Premiership following Giovanni van Bronckhorst’s first league win in the Ibrox side’s 3-1 victory at Livingston earlier in the day. 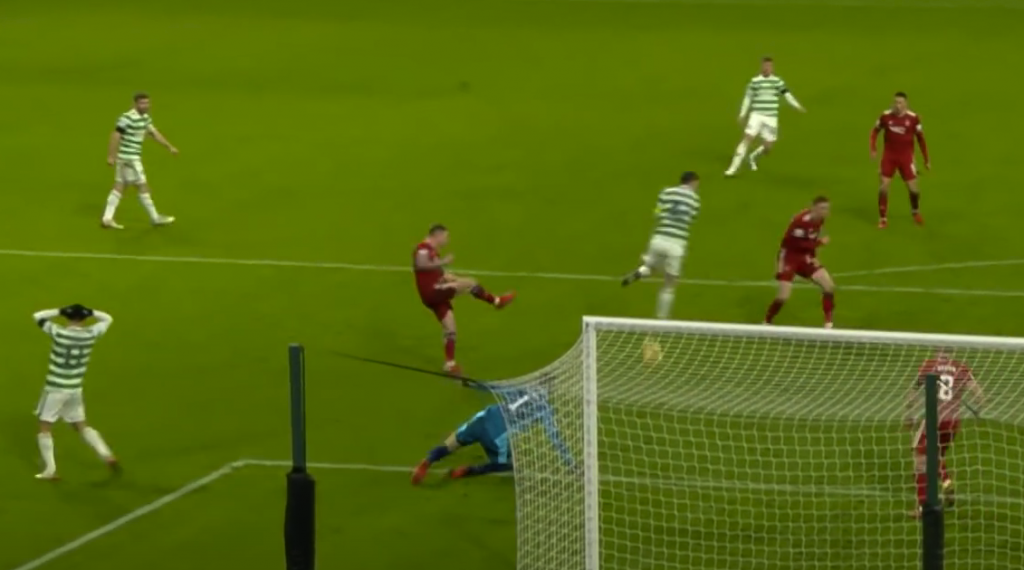 ON THE REBOUND…Callum McGregor blocks Jonny Hayes’ attempted clearance as Liel Abada (extreme left) holds his head in his hands after seeing his shot saved by the grounded Joe Lewis. 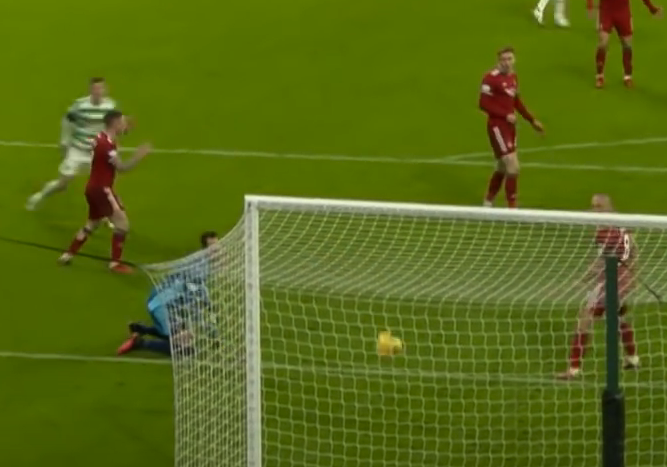 IN THE NET…Callum McGregor watches the ricochet bounce towards its destination as former Hoops skipper Scott Brown gets a close-up view.

Captain McGregor, who had a rare old tussle with his former team-mate and skipper Scott Brown in the middle of the park, moved to block a clearance from another ex-colleague, Jonny Hayes, after keeper Joe Lewis had saved at the feet of Liel Abada.

The Dons defender attempted to belt the ball downfield, but the Hoops onfield leader somehow got in the way and the effort rebounded from his left boot and ricocheted into the empty net for the decisive moment that made sure the team would remain just four points adrift of the pinnacle.

Postecoglou was adamant fortune had favoured the brave and said: “I don’t know about luck. If you put yourself in those situations often enough, then you know…

“We had a couple cleared off the line, we hit the post. Is that unlucky? I don’t know. In the end, I think it was deserved.

“I don’t think we were just grinding on this occasion. We were still bright in areas. 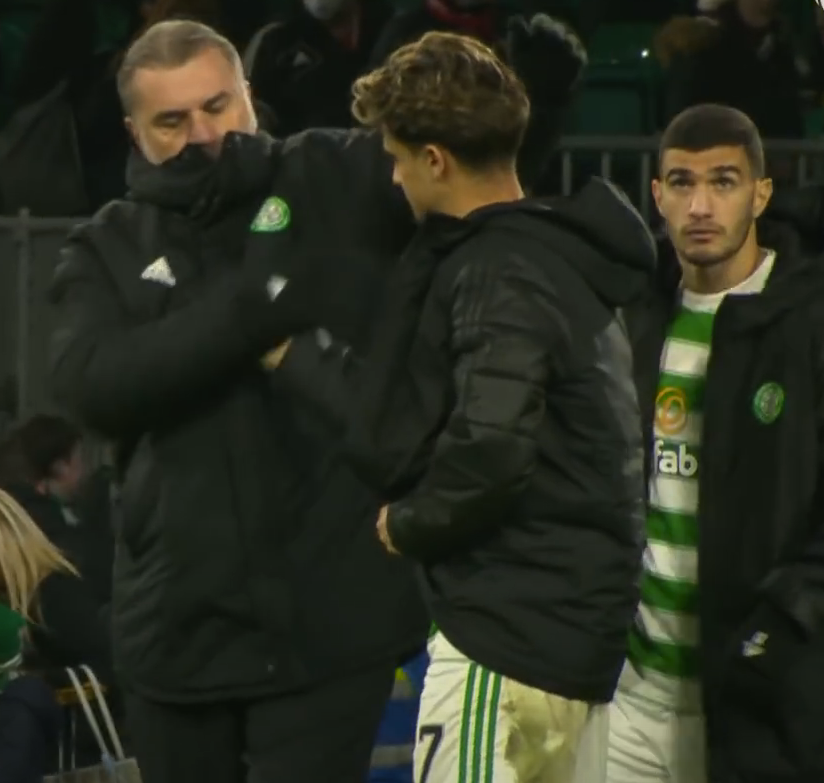 COLD COMFORT…a wrapped-up Ange Postecoglou congratulates Filipe Jota at full-time as Liel Abada awaits his turn for a pat on the back from the boss.

“Aberdeen were well organised and we had to find creative ways to break them down.

“It’s not easy when the opposition sits so deep. It wasn’t a game that was going to be open and entertaining.

“But it’s important you get these victories. I still thought we got it with elements of our game, particularly the defensive side.

“People talk about the attack, but we are relentless defensively, from Kyogo at the front to the boys at the back and in midfield. We work hard. Getting rewards that way, there is nothing wrong with that.”

Reflecting on the Europa League exit after Thursday’s 3-2 loss to Bayer Lverkusen at the BayArena, the Greek-Australian remarked: “The players put in a lot physically and emotionally on Thursday night. We were disappointed by the outcome.

“A couple of days later, we had to pick it up and I thought our energy was really good. We put some pressure on at the start and got our goal.

“They got the penalty, which brought them into the game a little bit, but then in the second-half we went to another level in terms of our energy, our relentlessness to chase balls down. 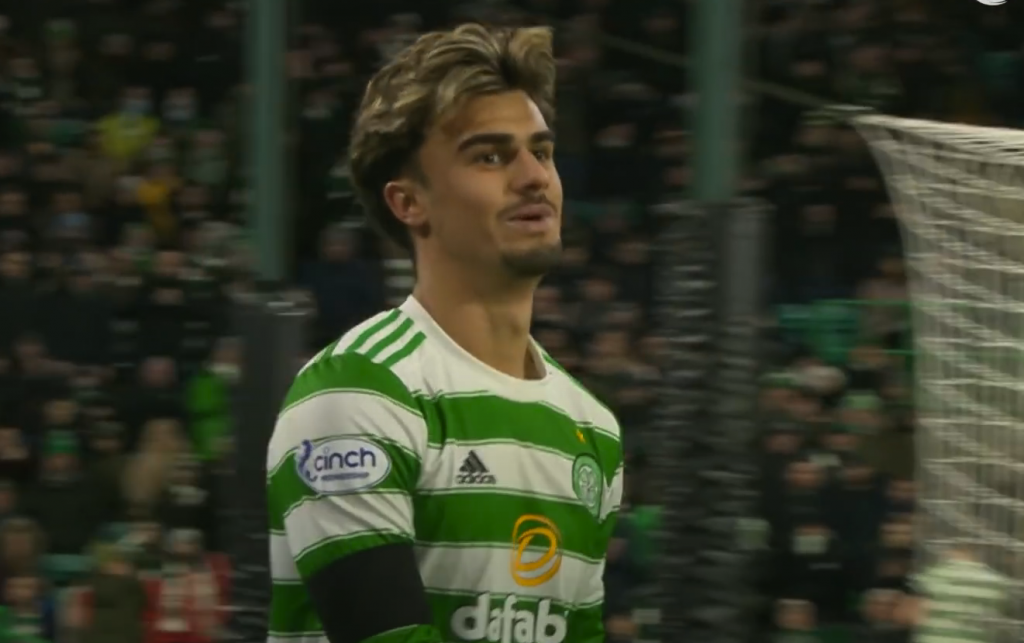 THE LAST POST…Filipe Jota looks disappointed after hitting the woodwork.

“It’s really important because I know how difficult that is to do, physically and mentally, after a big midweek night. I’m really pleased the players got their rewards.”

The manager also believed his side’s display was a fitting tribute to Lisbon Lion Bertie Auld who passed away earlier this month and for the pre-match moments of remembrance for the legend’s passing.

Postecoglou, speaking to the Daily Record, added: “Yeah, brilliant. It’s a very important 10 days for this football club. It was right because his family are obviously going through a tough time and it was right that we honoured him in the right way.

“I think we did that in our performance against St Johnstone in the semi-final.

“It was disappointing on Thursday, but I still thought in Europe we played in the manner he would have been proud of and we capped it off against Aberdeen. It was a beautiful service on Friday. It’s great for the players to see how this club treats its greats.”

Celtic could welcome back Nir Bitton, injured for the Dons clash, for the visit of Hearts on Thursday night when they go in pursuit of three more precious points.