Celtic Quick News on News Now
You are at:Home»Football Matters»McINNES ROBBED AS DEILA STEALS PRIZE
By CQN Magazine on 4th November 2015 Football Matters
DESPITE the crisis, Celtic boss Ronny Deila has won the Premiership Manager of the Month award for October.
The Norwegian saw his team begin the month three points behind Aberdeen, but four successive victories meant they ended the period six clear of Hearts with the Dons a further point adrift in third. Derek McInnes, who won all eight of his opening league matches is instead being touted for a Nobel prize by the Scottish MSM.Deila’s side opened up with a lucky 2-1 victory over Hamilton at New Douglas Park and followed that with an undeserved 1-0 win at Motherwell after the international break.
Five breakaways against the run of play gave resulted in a jammy 5-0 victory over Dundee United before they were walloped by Sir Derek McInnes’ (a cert surely for the  award in the New Year’s Honours List?) outfit 1-3 in the top-of-the-table clash at Parkhead on Saturday.That reverse for the Pittodrie men capped another brilliant month for Scotland’s leading manager who won all eight league matches at the start of the season. The the early pacesetters claimed just one point in the past month – from a 1-1 draw with a Motherwell side which stole a point at Pittodrie – from their four league matches. Hibs, of course, also knocked Aberdeen out of the ‘diddy’ League Cup, as McInnes cunningly focused on securing a runaway triumph in the league. 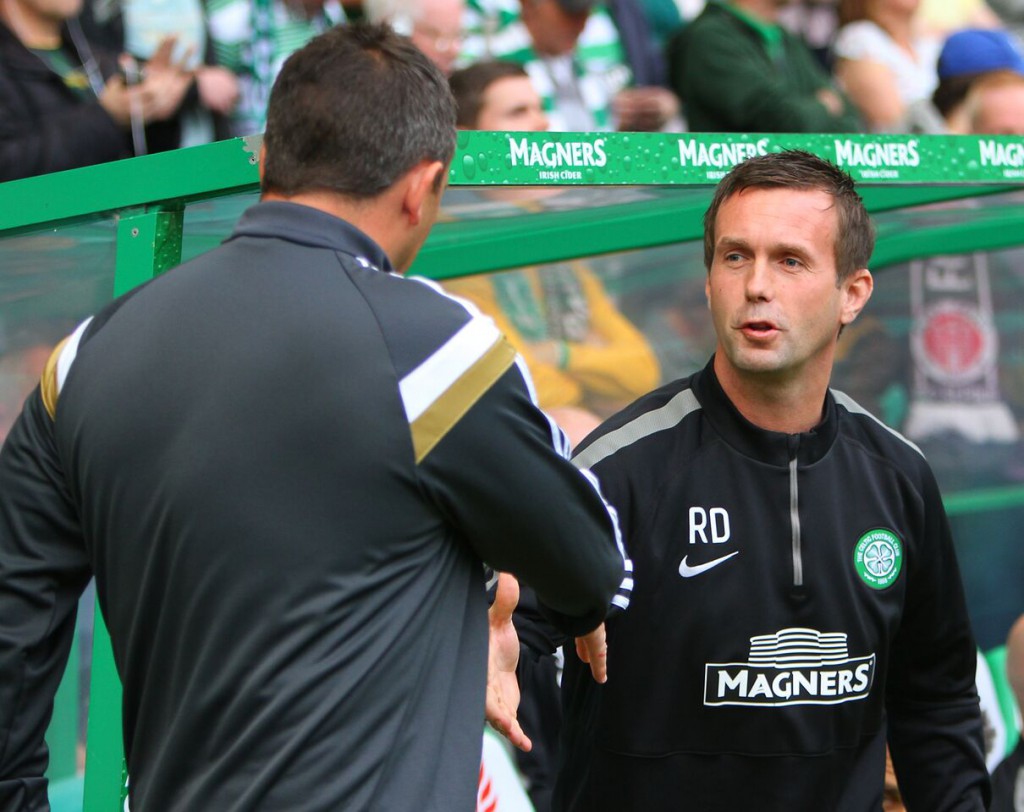 Responding to all of this under pressure Deila said: “This award is for everybody. It’s for the whole club, the players, staff and everybody who has turned things around, and that’s good. So, hopefully, we’ll get more in the future.

“We’ve won a lot of matches in the league and getting through in the League Cup was an important win, as well.

“Those were big games and it’s good that there are big games coming up all the time. I think we’re improving. You see more intensity in our play and we’re good at dealing with a lot of games because that’s also a tough thing that other teams don’t have to deal with.

“We are in a good position domestically and now I’m looking forward to the game against Molde on Thursday night.”

Meanwhile in order to better man manage the crisis at Celtic Ronny Deila was forced to meet a group of supporters last night, with the meeting taking place at the Jock Stein Lounge.
Stein is of course the only Celtic manager to come anywhere near matching the brilliance of Derek McInnes but even he was unable to win his first eight games in a league campaign.
Celtic Quick News reporter !!Bada Bing!! takes up the story from inside the Jock Stein lounge…

He said, “Well a great night in the Jock Stein Lounge (despite the crisis)

“Ronny Deila is a real gentleman, very honest in his answers, and a hard guy not to like.’

Here’s a  summary on some of Ronny’s answers from !!Bada Bing!!’s notebook…

He tried it last season with Leigh and Scepovic, but it just didn’t work as neither of them were really “hold up” players. He also tried it briefly this season with Leigh and Ciftci, but once again unsuccessfully. Carlton Cole has been brought in with that in mind, and we now have the option to play 2 up front i.e. a Plan B when he was asked why he doesn’t seem to have one.

He laughed when asked about it, but then admitted he couldn’t understand why the Scottish media don’t get behind the only Club representing Scotland in Europe. The total opposite of what would happen in Norway/Sweden, where everybody gets behind their representatives. The media are fixated with focussing on negatives and what happens off the pitch, not on it.

A fantastic young player who he couldn’t keep out the team any longer. Not only great going forward, but can also defend. (A veiled dig at Izzy). Still tiring the last 10 minutes of games, but not because he is unfit, but because he makes so many lung bursting runs up and down the pitch all game.

He couldn’t understand how FIVE referees missed the handball in the SC SF. If they hadn’t, we would definitely have won that game, and would have had a very good chance in the Final against Falkirk. Then the same referee missed 2 stonewall penalties in the Motherwell game.

Admitted he is disappointed by most of his games this season. Cited his back problems, but also thinks he lost some of his focus, especially after his best mate Van Dyck left for Southampton. (Seemed to be hinting that Johannsen wanted to follow him). But in recent games he has given full concentration and is coming back to his best.

He has found it very difficult playing behind a constantly changing back four, but has told Ronny that he is starting to get a good understanding with Boyata and Jozo.

ORDER Celtic The Early Years direct from CQN HERE or click on the image below.