Celtic Quick News on News Now
You are at:Home»Latest News»‘NIR DID NOTHING WRONG’ BLASTS AGENT
By CQN Magazine on 11th November 2016 Latest News

THIS morning we are no clearer in understanding what exactly has happened between Celtic midfield star Nir Bitton and the Israeli national coach Elisha Levy but one this is certain – the two must have had some row!

Yesterday we reported that the Celtic midfielder had been sent home from international duty by Israeli FA chiefs for “disciplinary reasons” after apparently “refusing to take part in a training exercise”.

Bitton was due to play for his country on Saturday in the World Cup qualifier in Albania, with Israel lying fourth in qualifying Group G, below leaders Spain, Italy and the Albanians.
They began their campaign with defeat to Italy, but then beat Macedonia 2-1 before edging Liechtenstein by the same score last month.
Now the player’s agent Dudu Dahan has contradicted the narrative being put out by the Israeli FA. In Israeli media Dahan said this:
“The message issued by the association to the media this afternoon is not accurate and does great injustice to Nir.

“Every coach who has coached the player in the last decade, abroad and with the Israel national team, will talk about zero discipline problems both professionally and personally.” 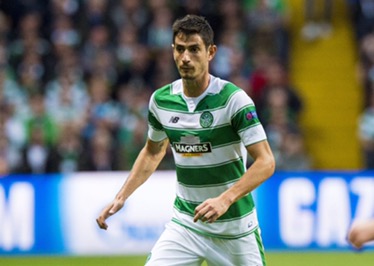 However in their own statement, the Israeli FA made it clear the Celt won’t win another cap while Levy is the national team manager.

“It is the end of the story for Nir Bitton in the national team under the current coach,” the statement says.

Bitton, 25, was a fixture of the champions’ side last season and at the start of this campaign, but has since fallen out of form, with Brendan Rodgers preferring to start Stuart Armstrong.

Meanwhile Celtic legend Davie Hay, commenting on the Bitton story in his newspaper column, had this to say about the frustrations the player may be feeling at the moment as he struggles for form.

“It has probably been a reaction borne out of frustration, not just at the news he apparently received about not starting for his country this weekend but also because it just hasn’t been going for him at Celtic either.

It was not so long ago that Bitton was being talked about as the next player that would doubtless be Premiership bound from Celtic but since the turn of the year his performances have dried up.”

The player should take consolation in the fact that he is a Celtic player and that Brendan Rodgers clearly rates him very highly.
Stuart Armstrong’s emergence as a central midfielder under Rodgers presents a challenge for the Israeli but he can work hard in training and look to get his form back when he is called upon.
He is, it should be remembered, still featuring in most Celtic games with Armstrong not yet in a position of being an automatic choice under Brendan Rodgers.
And the supporter who have recently made Bitton their whipping boy should maybe give him a break.