Celtic Quick News on News Now
You are at:Home»Latest News»‘NO WORRIES ABOUT THE MANAGER,’ JULLIEN
By CQN Magazine on 27th November 2020 Latest News

The French central defender returned after missing 14 games with a back problem and saw Sparta Prague wallop the Parkhead side 4-1 for the second time in three weeks to bring an abrupt and embarrassing halt to the Hoops’ disastrous Europa League campaign.

It was another humiliating defeat from an average Czech Republic outfit and the Scots are out of competition with only one point from a possible 12 and two games still to go against AC Milan and Lille.

Lennon has witnessed his fumbling squad slump 11 points behind Steven Gerrard’s Ibrox outfit – although they have two games in hand – in their quest for a historic tenth successive title.

They have won only two games from a horrendous run of nine matches and have conceded a nonsensical 21 goals in nine outings with only one clean sheet in the shocking sequence. 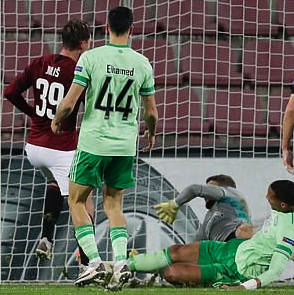 There is pressure mounting on the team’s gaffer, but Jullien, speaking to the Daily Record, said: “I have no worries about the manager.

“It was a bad game but we still have belief in each other and in the coaching staff. I believe in him – 100 per cent. He’s a great coach. He has done great work before and he will do it again.

“I know there’s not been the results, but the manager is doing a great job, we just have to erase these mistakes and work for each other.

“I believe if we do that we can get back to the way we were. It was a bad night, but there are some big matches ahead and a lot to play for.

“The manager has 100 per cent support from the players.”

Jullien revealed the players will have showdown talks and said: “We are just going to speak to each other and see what is wrong. We have the same players as last year and the same staff, they are still doing a great job.

“Mentally, we might have had a slump or something like that, but we just have to trust and believe in each other to get back to what we were doing last year.

“We were great. We wanted to win every game, we still want it, but there’s just something missing. 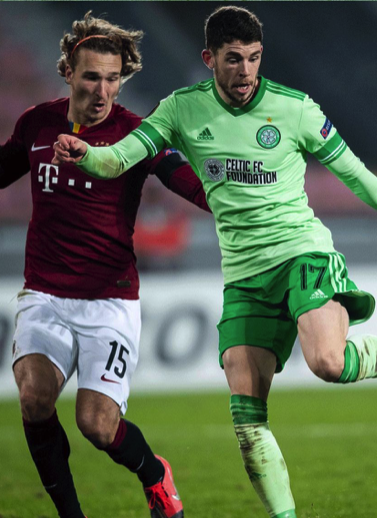 ON THE RUN…Ryan Christie puts on pressure.

“I think all the team are going to learn and work hard in training to get back to what we believe to be the great team we were – and are going to be.

“We still have four trophies (the Premiership, Betfred League Cup and two Scottish Cups) to play for. We have to focus, it’s about having a great mentality to win.”

Reflecting on another excruciating performance where just about every effort their opponents had on target ended up in the net, Jullien said: “We gifted them their goals. It was really disappointing.

“We had a lot of energy in the second-half and were confident about what we were doing.

“We felt we needed just one moment to get back into the game.”

Fellow-Frenchman Odsonne Edouard opened the scoring in the 15th minute and then squandered a glorious opportunity early in the second-half to make it 2-2 after the dithering defence had allowed Sparta to get back in front.

Jullien added: “You have to be good in both boxes. In that moment, he missed the chance, but we always trust him to do his job. He scores great goals and this is just something that happened.

“Odsonne knows that we are always going to trust in him because he has the talent and capacity to do something beautiful.

“The point that was really bad was conceding the third goal, that killed us.”