Celtic Quick News on News Now
You are at:Home»Latest News»NTCHAM: STUMP UP THE CASH
By CQN Magazine on 26th May 2021 Latest News

NEWCASTLE will be told they will have to stump up millions if they renew their interest in frozen-out Celt Olivier Ntcham.

Reports from across the border indicate Steve Bruce may make another move for the French midfielder after missing out in the January transfer window.

However, suggestions Ntcham, who cost £4.5million in June 2017 when he arrived from Manchester City, is about to have his contract ripped up by the Hoops with a year still to run are erroneous.

OLI OOPS…Olivier Ntcham is flat out after missing a superb opportunity in a game against Motherwell.

The Parkhead club have no intention of allowing the 25-year-old Frenchman to leave for nothing and is expected back at Lennoxtown for pre-season training next month.

Ntcham, of course, failed to make an impact at Marseille during a catastrophic temporary transfer when he made only two starts in four top-flight appearances.

The Ligue 1 club had the option to buy at the same fee the Hoops shelled out to the Etihad giants, but decided against activating the clause.

The Tyneside club, who are preparing a rebuild following their close call with relegation for a chunk of the campaign, could still cast their attention towards the former French Under-21 player, as CQN reported earlier this month.

However, they will face making a reasonable bid for the playmaker who has hardly kicked a ball in the past two months during his disastrous stay in his homeland. 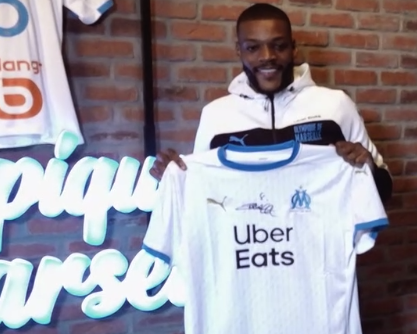 FRENCH FARCE…Olivier Ntcham beams brightly as he holds a Marseille shirt, but the grins soon turned to groans.

Everton and Southampton were also linked with Ntcham last summer, but it was decided to keep the player in such an important campaign. However, he started only 11 games and scored a solitary goal before his ill-fated move to Marseille where head coach Andre Villa-Boas made it clear he did NOT want the player.

The Portuguese gaffer, who has managed Spurs and Chelsea on his travels, threatened to quit before he was sacked 48 hours later.

Ntcham is now in soccer limbo as the Parkhead side prepare to announce Eddie Howe as their new manager.

It looks increasingly as though his future lies away from Glasgow.