NEW Bhoy Moritz Jenz celebrated his Celtic debut in the best possible manner – with a crucial goal in a hard-fought confrontation against Malky Mackay’s Highlanders in Dingwall this afternoon.

The German defender, on loan for the season from Ligue 1 side Lorient, joined the attack with the game balanced on a tightrope at 1-1 and the champions desperate to make sure they did not drop any points on dangerous territory.

Six minutes were left on the clock when Jenz knocked a header into the net to relieve the tension among the players and the supporters. The towering centre-back was presented with the opportunity to make a significant first impression and he took it. 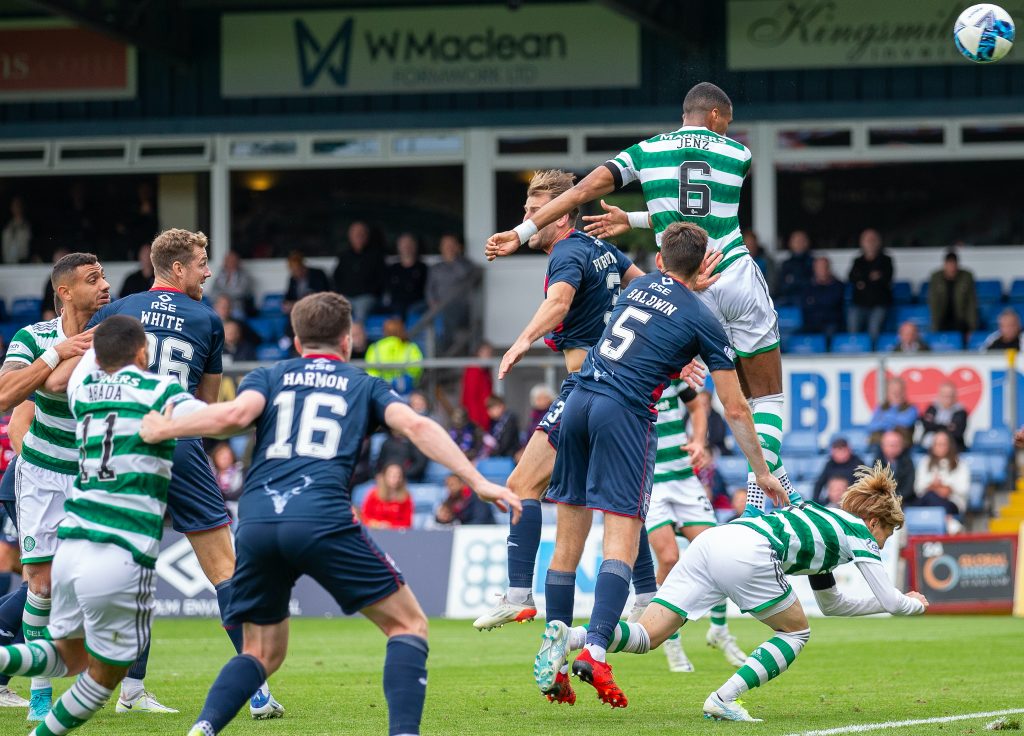 TALL BHOY…Moritz Jenz leaps high to score a debut goal and give Celtic a 2-1 lead in Dingwall.

Filipe Jota, who had darted around mencingly throughlout the keenly-contested confrontation, sent in a glorious cross following his team’s tenth corner of the match.

The determined and dour rearguard action of Malky Mackay’s side disintegrated when Jenz appeared to flick the ball wide of the startled Ross Laidlaw.

And Liel Abada made absolutely certain in the first minute of stoppage time when he spun onto a pass and set an effort swirling into the net. 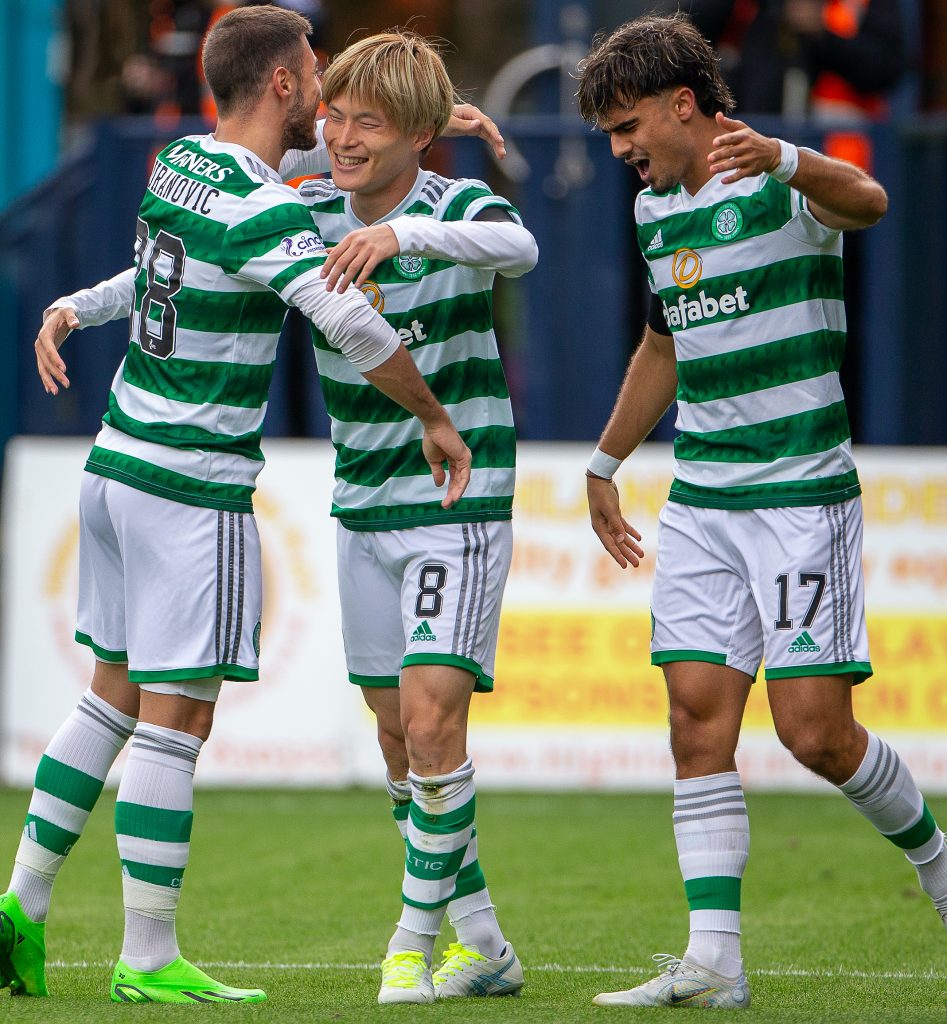 Kyogo Furuhashi had ended stubborn Highland resistance shortly after the turnaround, but that had been wiped out by a header from Alex Iacovetti with question marks over the marking at a corner-kick.

It was a frantic Premier Sports League Cup dress rehearsal for the end of the month when the holders play at the same venue in their first defence of their trophy.

Before the kick-off, there was a surprise when Stephen Welsh, as scorer in the 2-0 opening-day victory over Aberdeen last weekend, was missing from the matchday squad.

It was explained afterwards the former Scotland Under-21 captain had taken ill in the build-up to the game and Ange Postecoglou decided not to take a chance against the Highlanders.

There was a nice touch, too, from Celtic fans who unfurled a banner in honour of John Hughes who sadly passed away at the age of 79 on Monday evening after a short illness. It read: ‘YOGI – A CELTIC MAN, REST IN PEACE‘. An accurate description of the player who scored 189 goals for the team from 1960 to 71.

The wind was troublesome for most of the day and the nearest to a breakthrough strike came in the 16th minute when Jota shimmied past three challenges on an electrifying sortie in from the right.

He whipped in a low drive that looked destined for the target until a desperate defender stuck out a leg and diverted it wide of the target.

In the 27th minute, the Portuguese personality set up an opportunity for Daizen Maeda with an accurate cross from the right, but the Japanese speedster’s timing was just off and his header flew harmlessly wide. 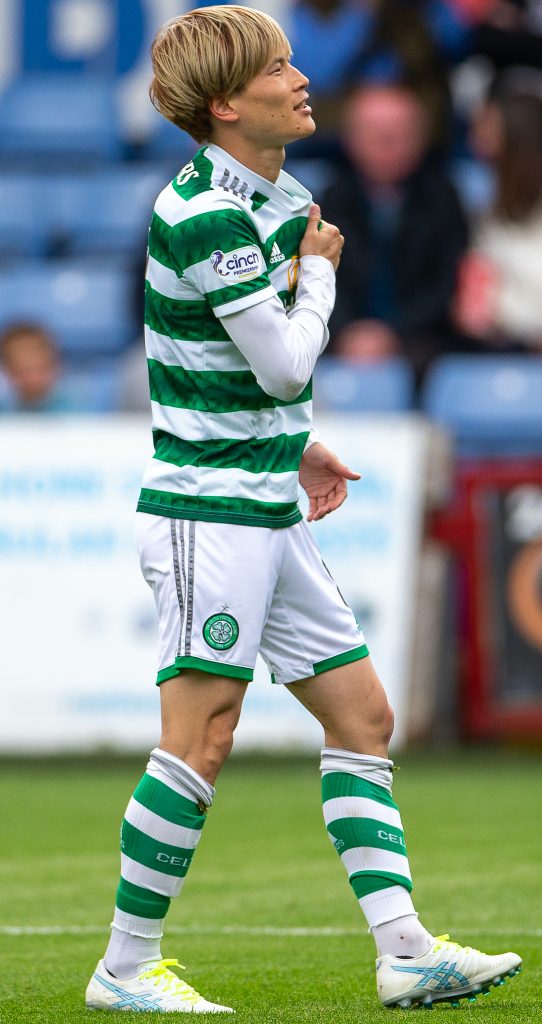 JOY BHOY…a delighted Kyogo Furuhashi as he gets off the mark for the new season.

Ross Callachan was the game’s first booking after tugging back Callum McGregor and his County skipper Jack Baldwin was fortunate not to join him after a clumsy challenge had sent Matt O’Riley flying. On this occasion, referee Don Robertson kept his card in his pocket.

Jordon Tillson, though, wasn’t so lucky when he saw a yellow after a badly-timed tackle on Kyogo.

In the 37th minute, the prolific hitman was denied when he snapped in a first-timer that was pushed away by Laidlaw. The ball ricocheted to O’Riley, but his return volley swept wide of the right-hand upright.

Cameron Carter-Vickers displayed some nifty footwork as he drove into the penalty box, but his deft finish took a flick off an opponent and fly over the crossbar with Laidlaw relieved.

And the keeper was let off the hook only moments later when Josip Juranovic sent in a cross off the outside of his right foot. It picked out O’Riley six yards out, but he sent his header spinning past the post.

As half-time neared, Laidlaw pulled off a superb diving save to his right when Maeda athletically directed a left-wing cross from Greg Taylor goalwards.

It looked destined for the bottom right-hand corner until the yellow-clad netminder got down in a flash to get his hand to the ball to deflect it wide of the target.

NUMBER ONE…Kyogo Furuhashi drills in a low shot to break the County barrier.

Maeda was injured during his mid-air swivel to get to the cross from his left-back and he did not reappear for the second-half with Liel Abada taking his place.

Three minutes into the second-half, Kyogo got the opening goal after a fabulous build-up from the Hoops on the left with McGregor setting Jota clear with a lovely short through pass.

The winger sped past a challenge in the box to fire a low cross into the danger zone and the Japanese raider arrived with perfect timing to drill a low shot from 12 yards beyond the helpless Laidlaw to his right.

However, the good work was undone 10 minutes later when the home side levelled with a remarkably simple goal from a set-piece.

A corner from Owura Edwards was met by the unhindered Alex Iacovetti who rose to thunder a header wide of the helpless Joe Hart.

NUMBER TWO…Moritz Jenz is about to be congratulated by Matt O’Riley and Liel Abada after leaving Ross County keeper Ross Laidlaw helpless. 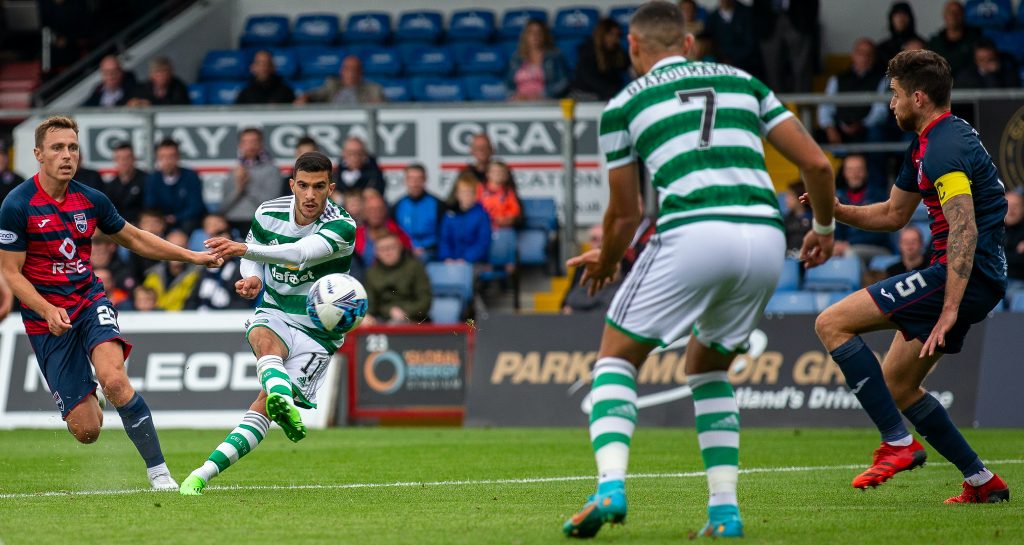 NUMBER THREE…Liel Abada curls in the decisive goal with Giorgos Giakoumakis getting a close-up view.

It was a stunner for the champions and gave a massive boost to the Highlanders who had been on the receiving end for the bulk of the action with the visitors claiming an extraordinary 80 per cent of possession.

Jenz was the first Celtic booking when he was adjudged to have given away a free-kick with a challenge on Jordy Hiwula just outside the box. Edwards’ drive went straight through the Hoops’ wall and Hart was forced to pull off a brilliant reflex save.

It had been an incredible turnaround in such a short space of time when it looked as though how many the Parkhead men would score after finally breaking the County barrier.

Postecoglou changed things around in the 73rd minute when he took off David Turnbull and sent on Giorgos Giakoumakis to play in a two-pronged attack alongside Kyogo. 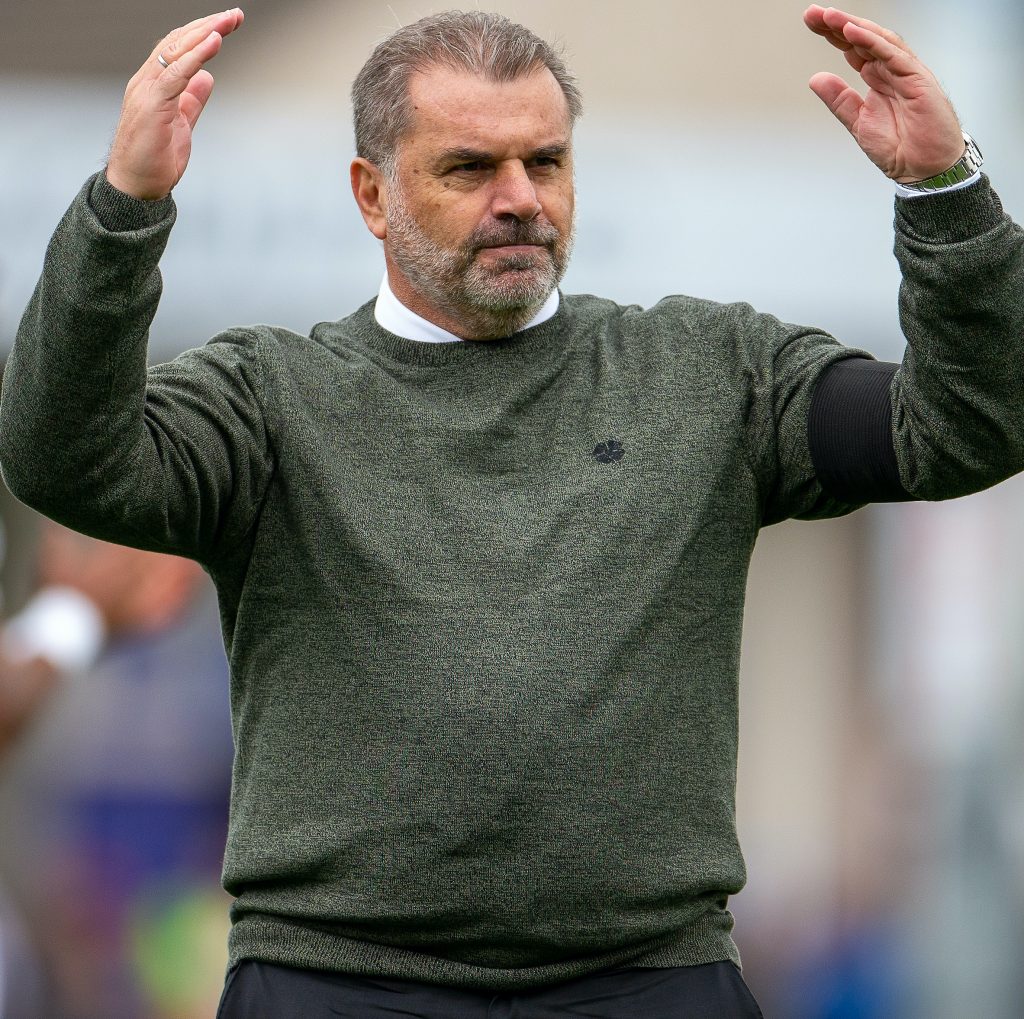 HAIL, HAIL…Ange Postecoglou, wearing a black armband in respect of John ‘Yogi’ Hughes, celebrates with the Celtic fans after a hard-fought triumph.

In the 84th minute, Jenz was celebrating a dream debut after glancing a header from a Jota cross beyond the stranded Laidlaw. It came after the title-winners’ tenth corner of the afternoon of almost relentless pressure.

Kyogo limped off immediately to be replaced by another new Bhoy, Aaron Mooy, with the Global Enrgy Stadium in a joyous frenzy with the Celtic fans in fine voice.

And the decibel level rose even higher when Abada conjured up a superb third goal to seal the points.

John ‘Yogi’ Hughes would have approved of the battling, courageous and entertaining qualities displayed by his old team.