The Hoops were leading through a Filipe Jota strike in the 19th minute when the whistler adjudged Liel Abada had deliberately brought down defender David Bates in the box in the 33rd minute.

TV pictures proved conclusively that the Israeli winger was actually pulling out of the challenge and if there was contact it was instigated by the Pittodrie player.

Clancy, with an excellent view of the incident, astonished the massive crowd by immediately pointing to the spot. 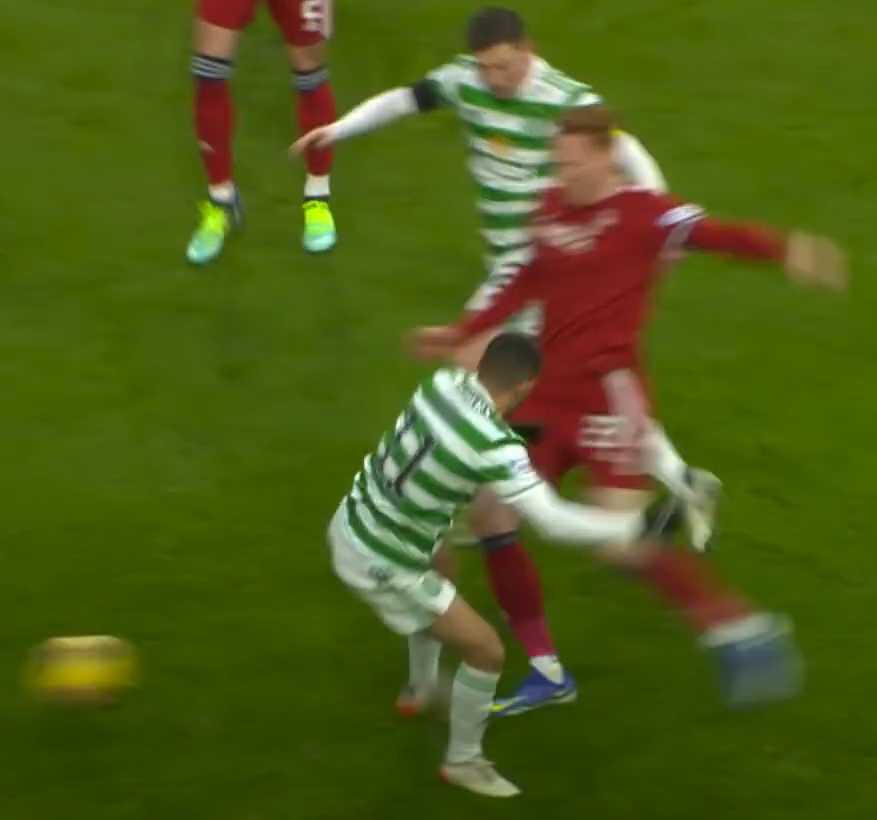 PHOTOGRAPHIC PROOF…Liel Abada does NOT make contact with David Bates at the crucial stage before referee Kevin Clancy’s controversial decision.

Lewis Ferguson, who makes a habit of being gifted penalty-kicks against the Hoops after getting two in the one game last season, expertly tucked the ball behind Joe Hart to draw his team level.

But Welsh international legend Hartson was incensed at the match official’s decision and insisted Bates should have been booked for taking an obvious dive.

The former Hoops fans’ favourite, speaking to Celtic TV, said: “It’s Abada on Bates, but I’ve seen this now three or four times and, for me, there is no contact.

“Abada pulls his foot away. Not only is it not a penalty for me, but it’s a yellow card for Bates.

“But the referee couldn’t point his finger quick enough to the spot.

ON THE SPOT…Joe Hart is left helpless as Lewis Ferguson thumps in the penalty-kick leveller.

“I genuinely think there is no contact at all there and Abada and Celtic have been really hard done by.

“Lewis Ferguson steps up and was really calm and takes a good penalty, but it should never have got to there.

“I genuinely don’t think Abada touches Bates at all. I think they have bought a decision off the referee there.”

Fortunately, Ange Postecoglou’s side got all three points when a ricochet off impressive skipper Callum McGregor from a Jonny Hayes clearance bounced into the net for the second goal.

The Hoops go back into Premiership action against Hearts in the east end of Glasgow on Thursday night.