Celtic Quick News on News Now
You are at:Home»Latest News»SINCLAIR BACKS LENNY FOR NINE IN A ROW
By CQN Magazine on 9th January 2020 Latest News

The flamboyant attacker has left the champions after three-and-a-half glorious years in which the Hoops won TEN successive domestic honours.

Sinclair, 30, has struggled for game time this season after claiming 61 goals in his first three campaigns and has now joined Preston on a two-and-a-half-year deal.

The popular one-time English international, who cost £4.5million when he joined from Aston Villa in August 2016 and scored the winning goal on his debut against Hearts at Tynecastle, reflected on his time at Parkhead as he prepared for a future with North End.

Sinclair, speaking to the Daily Record, said: “Brendan Rodgers left and there were a few changes and Lenny came in.

“He is doing a great job at the moment and I am sure that they will get nine in a row.”

The player, who was due to come out of contract in the summer, continued: “To do the treble treble has never been done, so that shows how difficult it is to do that.

“Obviously, the expectation levels are so high.

“The fans want to see you win every game, so there is no room for error, no room for any losses of draws.

“Even if you get a draw they are not happy, so you need to keep winning every single week.

“It was one of the best times of my career. I have won everything that there is to win up there. 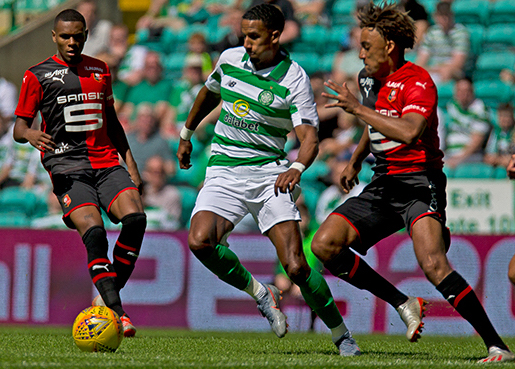 Sinclair is keen to get a run of games after only one competitive start for the Hoops in this campaign and said: “It has been very frustrating and for me now it is all about getting back playing and enjoying my football and scoring goals.

“It is a fresh start, a new chapter and I am buzzing to be here.”

Sinclair, who will make his Preston debut against Blackburn Rovers on Saturday, added: “I have got a lot of experience and the job for me is to come in and help the team and help the push for promotion.

“As a football player, you want to play in the big games and coming here, with where the club is heading, it is a great move for me.

“I know what this division is about. I have played in the Championship and it is my job to create and score goals and to enjoy my football.

“I had great memories getting promoted with Swansea back in 2011 and that is what we want as a club and I want to help with that and keep winning games.

“If I get chucked in straight away, or if I come off the bench, these are the games you want to be involved in – the derbies – and all the big games.

“I am sure I will settle in really quickly. I am sure the boys will welcome me and we will go from there.”