Celtic Quick News on News Now
You are at:Home»Exclusive Poll»THE BOLINGOLI QUESTION: IN OR OUT? LET’S HAVE YOUR VOTE
By CQN Magazine on 20th June 2021 Exclusive Poll

BOLI BOLINGOLI still has two years to run on his Celtic contract.

The bungling Belgian is in limbo after being returned to the club from Istanbul Basaksehir following his hastily-arranged loan switch to get him out of Parkhead after his unauthorised trip to high-risk Spain in August during the Covid lockdown.

New boss Ange Posticoglou has been examining the profiles of his squad before his arrival at Parkhead as Neil Lennon’s long-term successor.

Odsonne Edouard, Kristoffer Ajer, Ryan Christie and Olivier Ntcham are all likely to be moved on while Bolingoli, bought from Rapid Vienna for £3million in summer of 2019 to replace Arsenal-bound Kieran Tierney, will present his own dilemma.

The Hoops had hoped the Turkish outfit would take up the option in the temporary transfer, but they opted to snub the opportunity for the 25-year-old defender who played 18 times for them before being sidelined with injury. 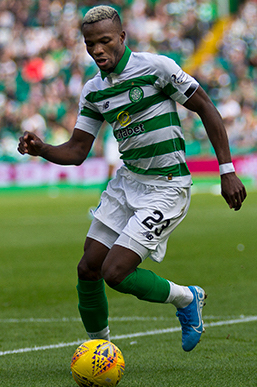 ON THE RUN…Boli Bolingoli in action for Celtic shortly after his arrival in the summer of 2019.

It is likely Bolingoli’s representatives are already working at finding their client a new club – unless Postecoglou reckons otherwise.

The former Australia international manager will know his new club aren’t exactly top heavy with the alternatives for the No.3 slot.

Diego Laxalt was brought in on loan from AC Milan as a replacement, but the Uruguayan World Cup defender failed to impress enough for the Parkhead side to make the move permanent and he went back to the San Siro outfit at the end of his contract.

Greg Taylor, currently with the Scotland international Euro squad, was also utilised in the position, but the squad is still short of cover for the position.

Now we want to hear from YOU.

In an EXCLUSIVE readers’ poll, all you need to do is click ‘YES’ if you believe Celtic should give Bolingoli a second chance or ‘NO’ if you reckon he should never again play for the team.

The poll will close at midnight tonight and CQN will publish the vote tomorrow. Let’s have YOUR verdict, folks.

SHOULD BOLINGOLI BE GIVEN A SECOND CHANCE?