Celtic Quick News on News Now
You are at:Home»Exclusive Series»THE SPIRIT OF 67: SMILER AND THE UNSUNG HEROES
By CQN Magazine on 23rd April 2020 Exclusive Series

CQN continue our EXCLUSIVE extracts from Alex Gordon’s book, ‘The Lisbon Lions: The 40th Anniversary’, with a tribute to the unsung heroes of the momentous European Cup Final triumph over Inter Milan in Lisbon almost 53 years ago.

NEILLY MOCHAN found himself pitchforked into Celtic folklore in 1953 – without kicking a ball at Celtic Park. Smiler, as he was known, walloped in a glorious 30-yard effort that screamed past Hibs goalkeeper Tommy Younger for the club’s first goal in the Coronation Cup Final in front of 117,000 fans at Hampden Park.

Celtic went on to lift the trophy with a second-half goal from Jimmy Walsh. Mochan had signed for Celtic in May of that year from Middlesbrough and played his first game in the Charity Cup Final against Queen’s Park.

In the space of a few weeks, then, Mochan had played in two Cup Finals for his new side as well as helping them to two victories on their way to the encounter with Hibs. He was included in the team to face English champions Arsenal and the Highbury men were firm favourites. Celtic won 1-0 with a goal direct from a corner-kick by Bobby Collins.

Manchester United were next up and once more Smiler was celebrating. Celtic won 2-1 and he scored alongside Bertie Peacock. Mochan had played four games for the club – all at Hampden. 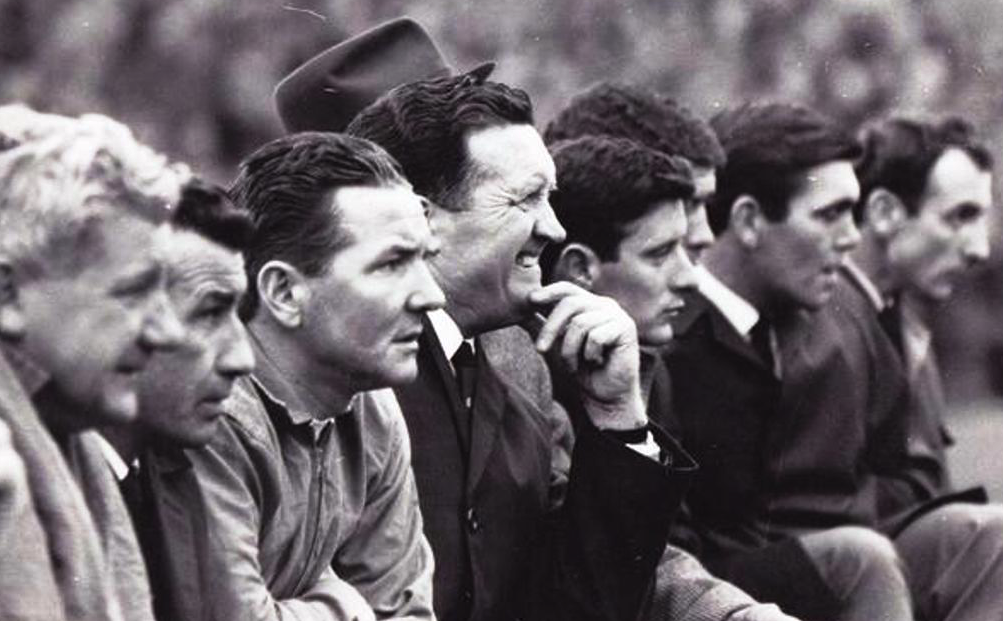 CONCENTRATION…Neilly Mochan is pensive as he sits beside Jock Stein on the touchline.

Lisbon Lion Tommy Gemmell once recalled: “Neilly was a great character and he used to walk me all over the pitch at Celtic Park. He would point to a spot about 30 yards out and say: ‘This is where I scored a goal against Dundee.’ Then he would point out another area: ‘I netted against Aberdeen from here.’ I don’t think there was a spot on that Celtic pitch where Neilly hadn’t scored from!

“You couldn’t take anything away from him, though. He trained us well. Just look at all the goals we scored late in a game. That was no fluke. He made sure we were in peak condition at all times.”

Bob Rooney was another trainer, who, like Mochan and physiotherapist Jimmy Steele, was great for team morale when the club were on their European trips. On one such sojourn early on, the players had complained to Jock Stein about the quality of the food they had been served at their hotel.

On the next trip, Big Jock had made sure there were Scottish steaks and the like in the hamper. And Rooney and Steele were dispatched to the kitchen to watch over the foreign chefs and make absolutely certain everything was prepared properly.

These were small instances, but, putting everything together, it helped shape the team that would be in the right frame of mind when it took that pitch in Lisbon. No detail was overlooked.

Everything had to be perfect to make sure everything turned out alright on the night. And, thankfully, it did.

TOMORROW: The Spirit of 67: We highlight some more Lisbon legends.