Celtic Quick News on News Now
You are at:Home»Latest News»WATCH: CELTIC IN SEVENTH HEAVEN – AND THE GOAL OF THE SEASON CONTENDER
By CQN Magazine on 10th April 2022 Latest News

After 6-0 wins over Dundee and St Mirren in the east end of Glasgow back in August – where Kyogo Furuhashi thumped in a hat-trick against the Tayside outfit and David Turnbull did likewise against the Paisley club – the Hoops went one better against their Perth visitors.

The result was never in any doubt as soon as Reo Hatate whipped in the opening goal in the eighth minute and Giorgos Giakoumakis added a second after snapping onto a loose passback from Callum Booth. Daizen Maeda flicked in an inch-perfect left-wing cross from Filipe Jota to make it 3-0 at the interval.

Josip Juranovic maintained his 100 per penalty-kick record by thumping a spot-kick award low past the helpless Zander Clark for No.4. 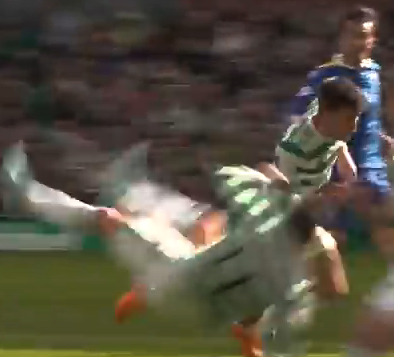 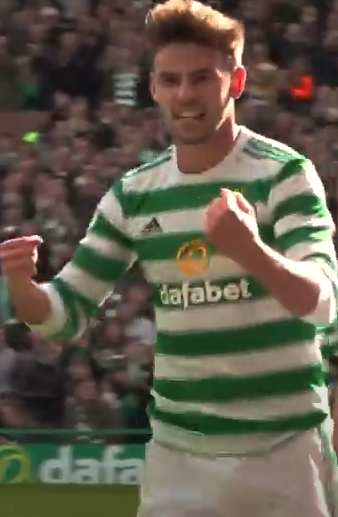 Postecoglou would have been delighted with all seven strikes, of course, but the fifth may have come into the Goal of the Season category for the Greek-Australian gaffer.

It was a sweet move from one end of the pitch to the other as the players probed for another opening. Joe Hart rolled a ball to skipper Callum McGregor who knocked it back to the keeper. This time the 75 times-capped England international passed it out to Cameron Carter-Vickers and the central defender picked out Turnbull.

Juranovic charged forward yet again to collect a pass from the midfielder before returning it to the substitute as he ran clear on the right.

One look up from Turnbull spotted Liel Abada and Matt O’Riley in good positions at the near post. A clever cross was missed by the Israeli winger who attempted an acrobatic overhead-kick, but the Danish Under-21 international swooped with a header to leave Clark stranded once more. 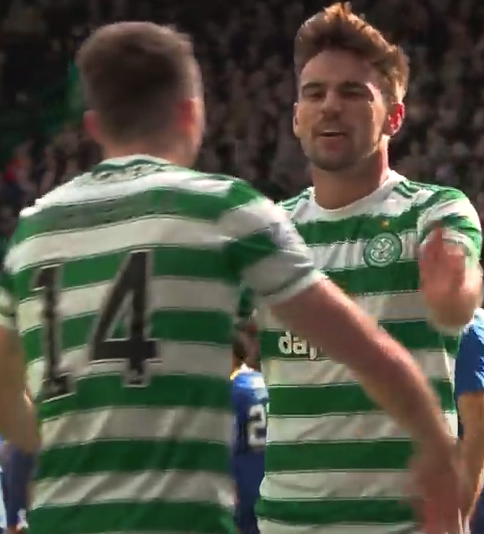 THAT’S MY BHOY…Matt O’Riley is congratulated by David Turnbull, provider of the cross for the brilliant fifth goal.

The former MK Dons star rattled in the sixth and Abada added a seventh as Celtic stretched their advantage at the top to nine points with five games to play. Their nearest challengers, of course, meet St Mirren in Paisley with a noon kick-off today.

At the moment, the Hoops’ have a strike superiority of a whopping TWENTY-THREE.

That will be worth a point in the unlikely event of the title being decided on goal difference.