Celtic Quick News on News Now
You are at:Home»Latest News»‘WE’RE GOING INTO THE UNKNOWN,’ KT
By CQN Magazine on 18th June 2019 Latest News

But the Scotland international left-back admitted the treble treble heroes will NOT underestimate the Bosnians, who won their nation’s league and Cup double last season.

The Hoops have just over three weeks to prepare for their first competitive game.

However, Tierney, who returned to pre-season training yesterday with the majority of the squad, reckoned the players are in excellent shape.

The 22-year-old defender, speaking to the club’s website, said: “It’s such a short break, so we’re coming back in good shape and good condition.

“We know we’re going to get a good week’s training in here at home, a good week in Austria and then we’ll be ready for the challenges ahead.” 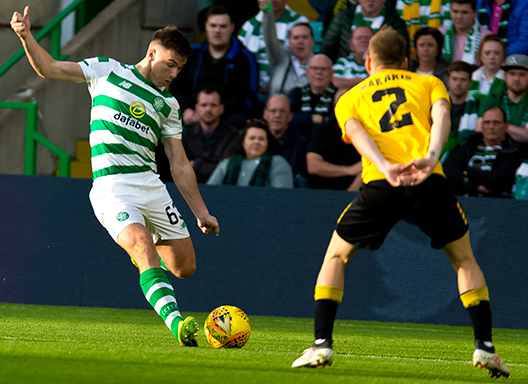 HEADING FOR THE EXIT…Keiran Tierney in action against AEK Athens last season.

eLooking at the Sarajevo ties, Tierney added: “You don’t get easy games or bad teams nowadays. Every team is good and they know how to play football.

“They’re all well organised, so there’s a clear standard to the football in that regard. They’re going to be hard to break down and they’ll come at us, as well.

“We’re going into the unknown against a team we’ve never played and against players we’ve never faced. It’s a hard ask, but the expectation at Celtic is to win and go through and that’s what we’re planning to do.

“The confidence is always high at the start of the season. We’ve returned off the back of another treble. You can’t do any better than that.

“We’ve just won a trophy in our last game, so going into our first competitive game we’re going to have confidence.”

Neil Lennon’s men will play the first leg at Parkhead on july 9 or 10 as they attempt to reach the Champions League group stages for the third time in four years.

The only hiccup came last season when they were sensationally knocked out 3-2 on aggregate in the play-off by an average AEK Athens outfit.