Celtic Quick News on News Now
You are at:Home»In Pictures»NINE-GAME ROLLERCOASTER: WORDS AND IMAGES OF THE SEASON: DECEMBER
By CQN Magazine on 3rd April 2020 In Pictures

CELTIC faced nine games in a frantic four-week spell in December – and something had to give.

Unfortunately, that ‘something’ turned out to be the Hoops’ first defeat in the east end of Glasgow for nine years from a side from Ibrox – but, at least, it was balanced by a Betfred League Final triumph over the same opponents at Hampden three weeks earlier when Christopher Jullien claimed the encounter’s only goal.

Neil Lennon’s side won their other six Premiership tussles, but went down 2-0 to Cluj in their remaining Europa League Group B tie in Romania when it didn’t matter after sealing their position at the top two games earlier. 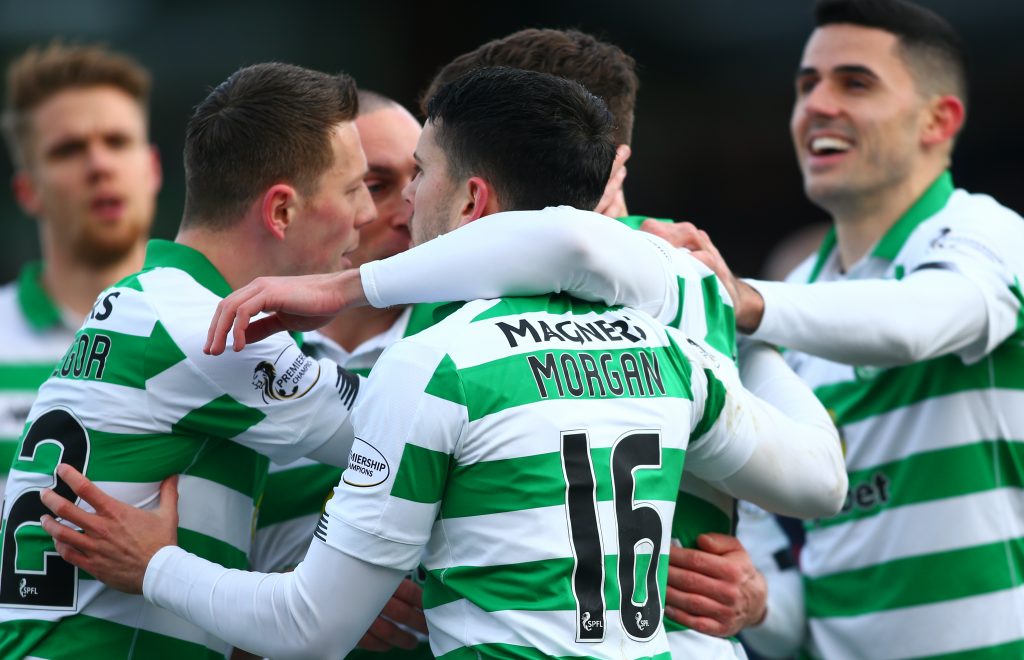 HIGHLAND FLING…Celtic players congratulate Ryan Christie after the opening goal in the 4-1 win at Ross County.

The month got off to a winning start when Ryan Christie (2), Tom Rogic and Mikey Johnston struck in the 4-1 success over Ross County in Dingwall. That was followed by the nail-biting climax to the visit of Hamilton Accies where skipper Scott Brown squeezed in a stoppage-time winner in a 2-1 victory. The Hampden triumph over Steven Gerrard’s outfit was next on the agenda before a much-changed team lost to Dan Petrescu’s side on their travels.

The champions picked up the pace again with a 2-0 win over Hibs at Parkhead with Odsonne Edouard and Jeremie Frimpong on target and it was capital punishment again when the visitors overcame Hearts at Tynecastle by the same scoreline thanks to strikes from Christie and Olivier Ntcham.

The march towards the ninth successive title continued with a 2-1 victory over Aberdeen with Jullien and Odsonne Edouard making it a striking French double-act and the following midweek saw a hard-fought 2-1 success over St Mirren in Paisley with Callum McGregor and James Forrest taking care of business.

Then came the stutter in the derby, but Celtic still went into the winter break a point ahead of their nearest challengers.

CQN‘s intrepid lensmen were there to capture the action. Here is the pick of the pics. 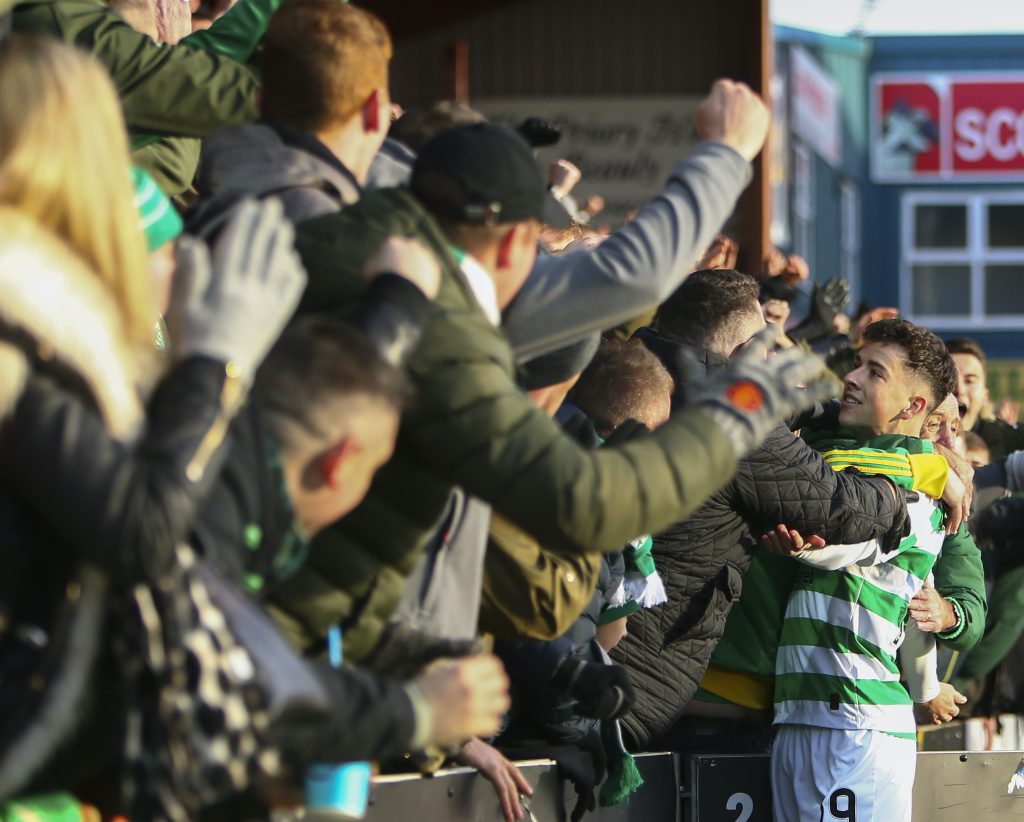 THAT WINNING FEELING…Mikey Johnston celebrates the fourth goal with the travelling fans in Dingwall. 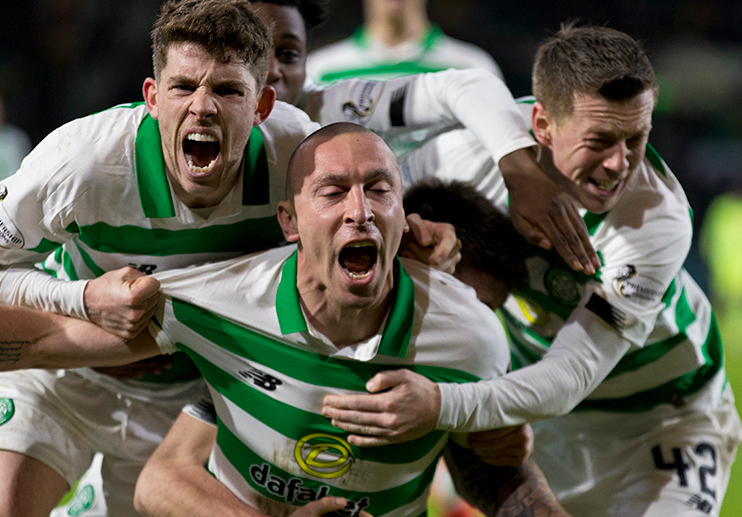 HOOP HOOP HOORAY…Scott Brown is joined by Ryan Christie, Jeremie Frimpong and Callum McGregor as he celebrates his late winner against Accies. 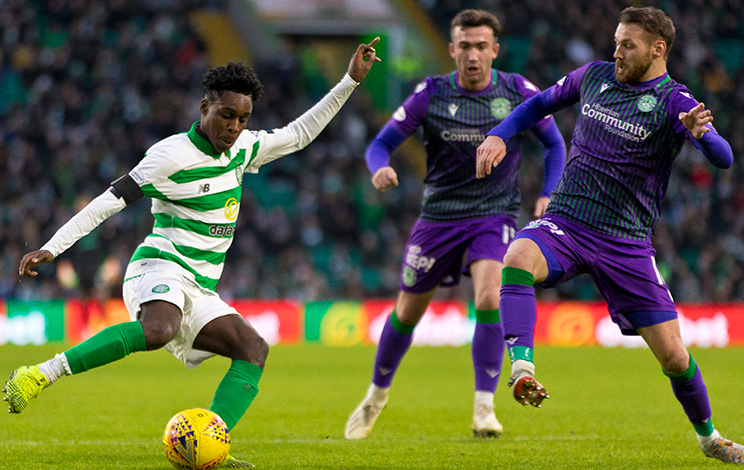 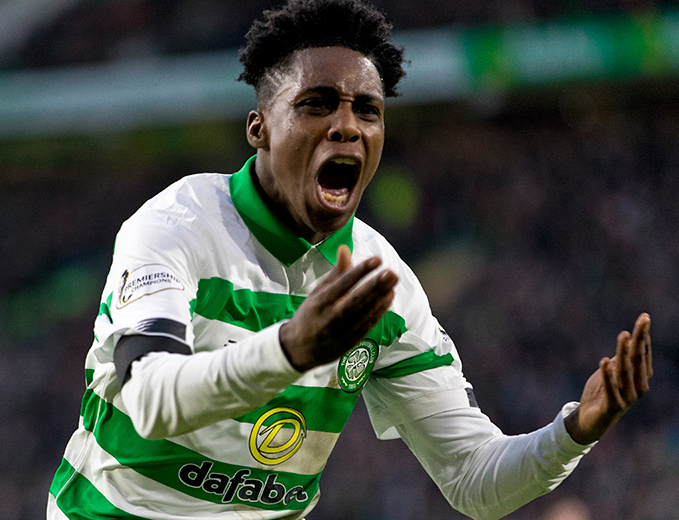 BHOY OH BHOY…Jeremie Frimpong celebrates his first goal at Parkhead against the Easter Road side. 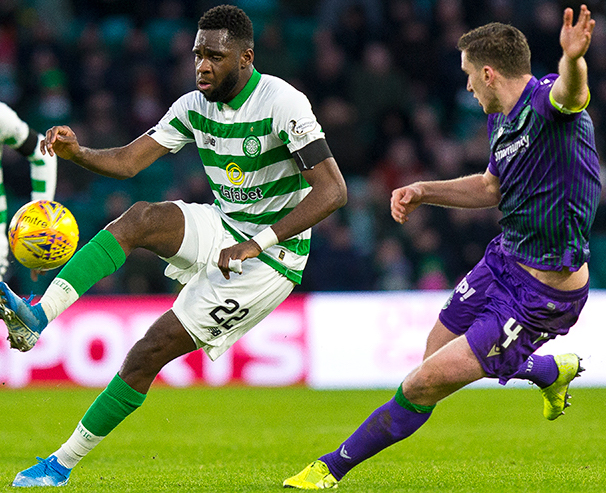 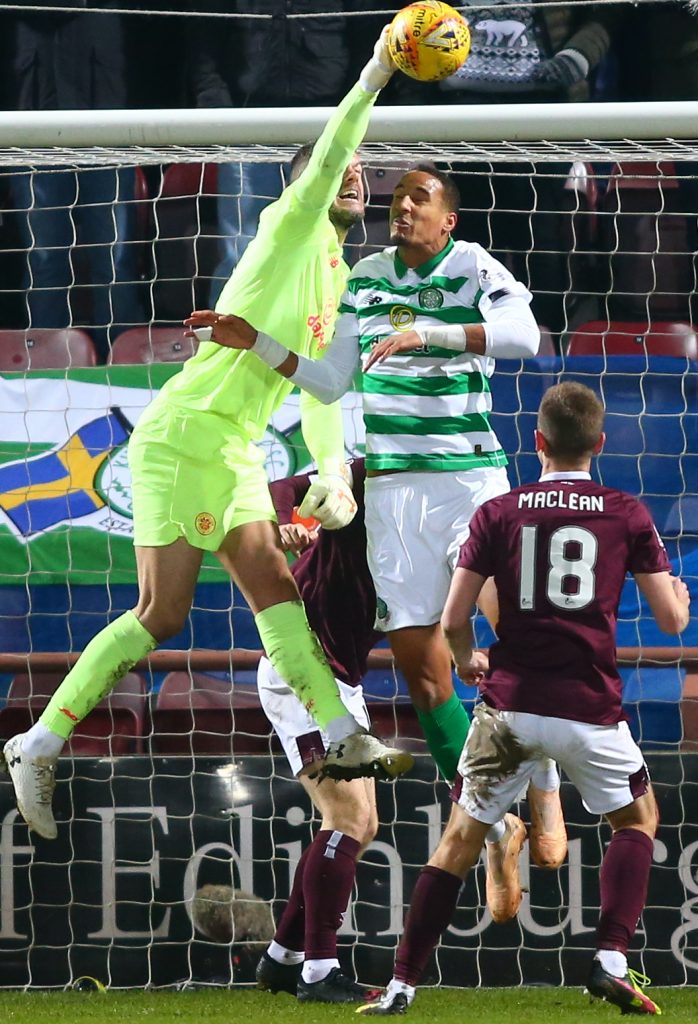 S-T-R-E-T-C-H…Fraser Forster leaps high to clear a dangerous cross with a little help from Christopher Jullien in the match at Tynecastle. Hearts striker Steven MacLean gets a close-up view of the action.

BY THE LEFT…Ryan Christie sweeps in the opener against Hearts. 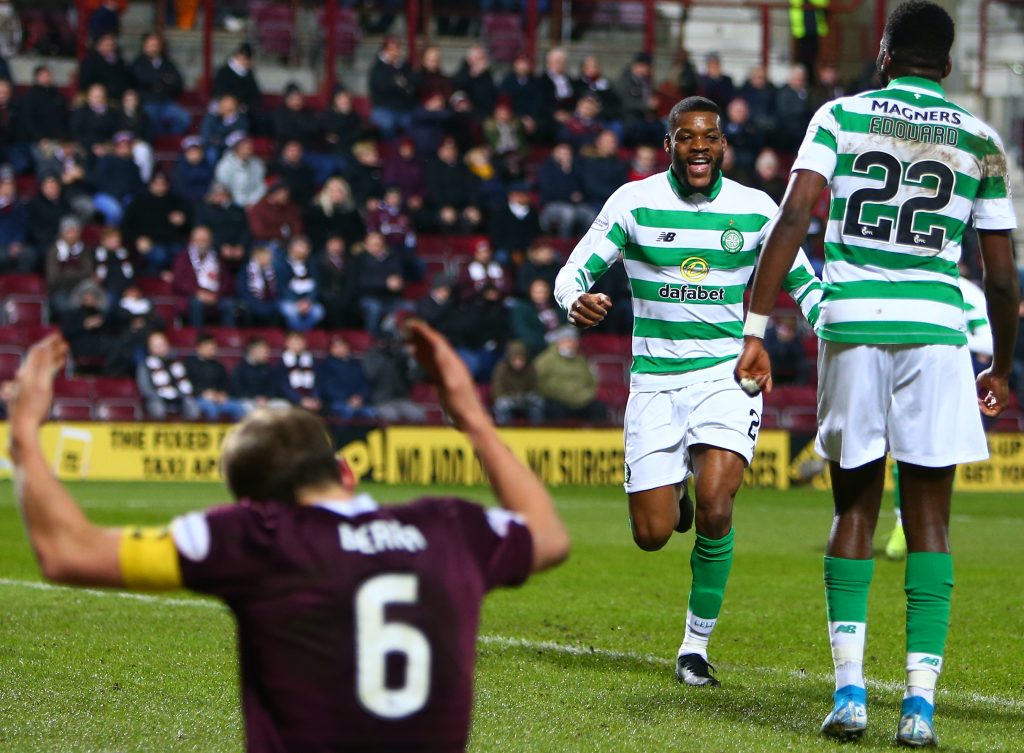 DELIGHT AND DESPAIR…scorer Olivier Ntcham races to Odsonne Edouard who had set up the chance for the second goal. Hearts defender Christophe Berra isn’t quite in sync with their emotions. 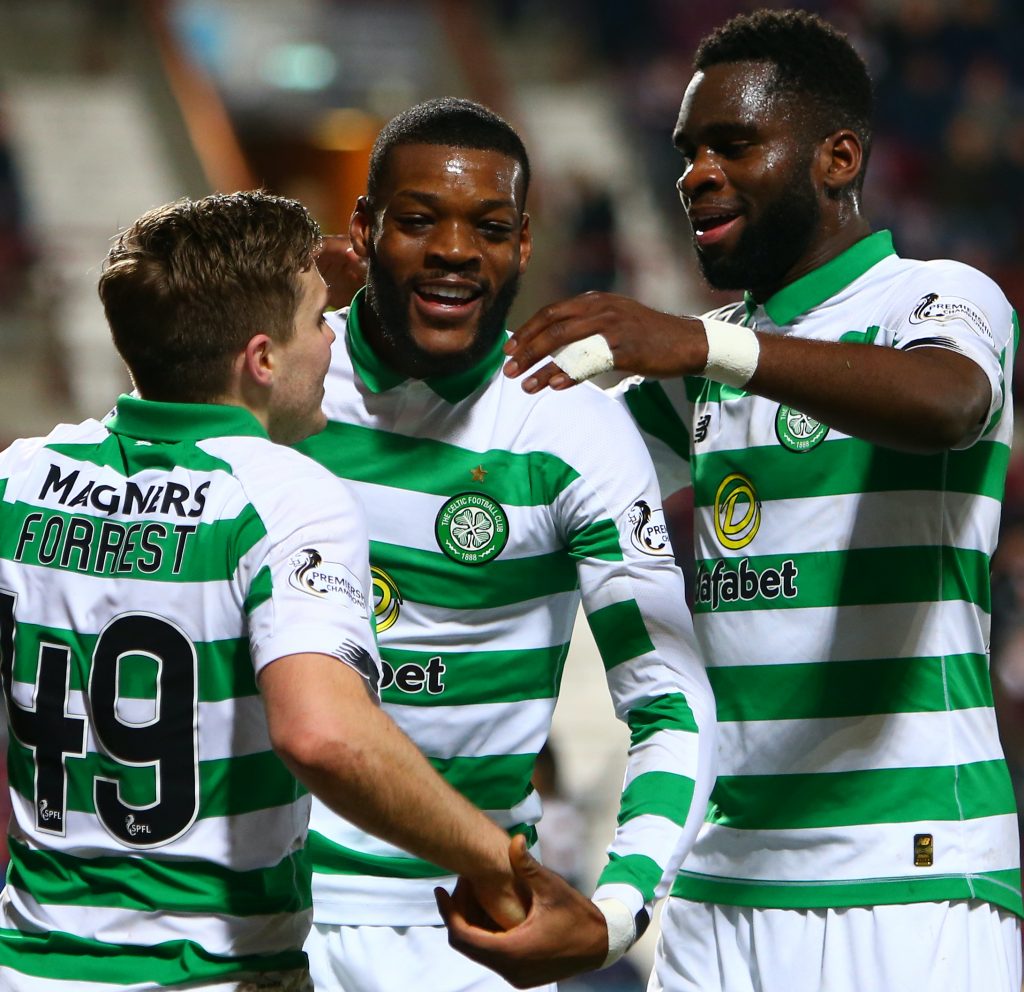 THREE CHEERS…James Forrest, Olivier Ntcham and Odsonne Edouard are delighted – and another three points are heading for Parkhead. 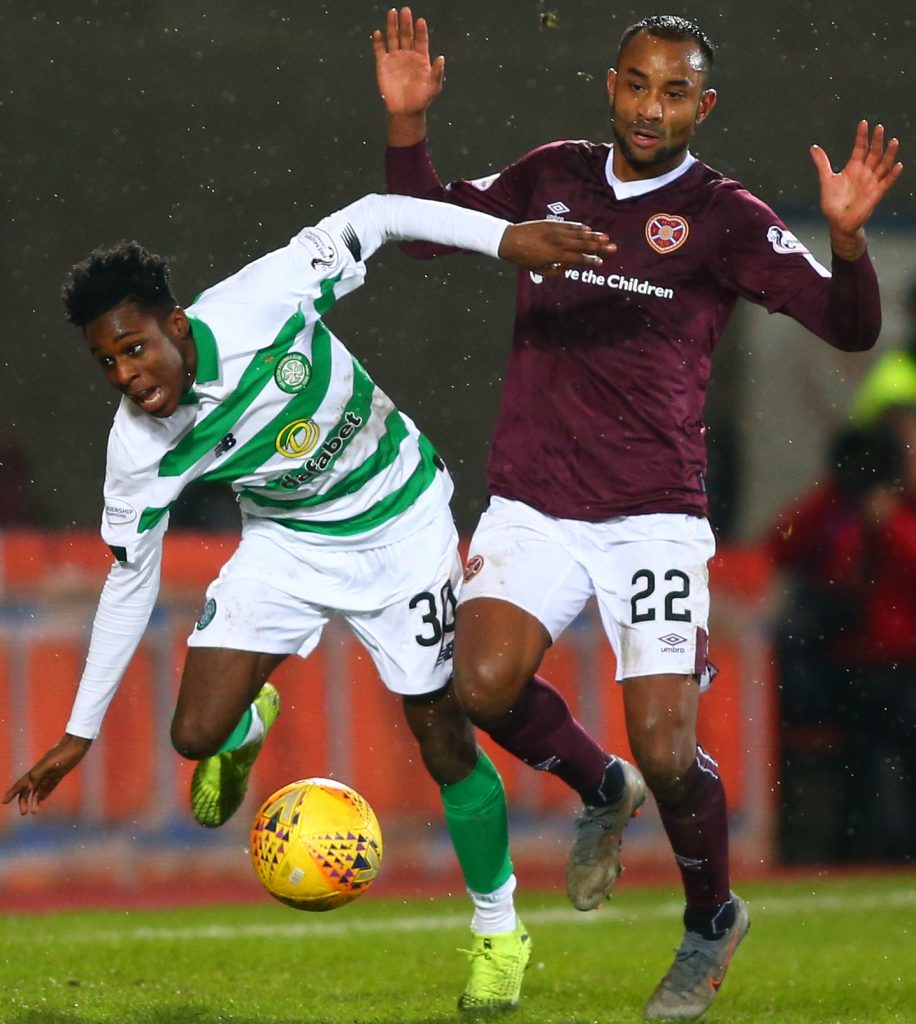 ON THE RUN…Jeremie Frimpong races away from a Hearts defender as Celtic continue to attack. 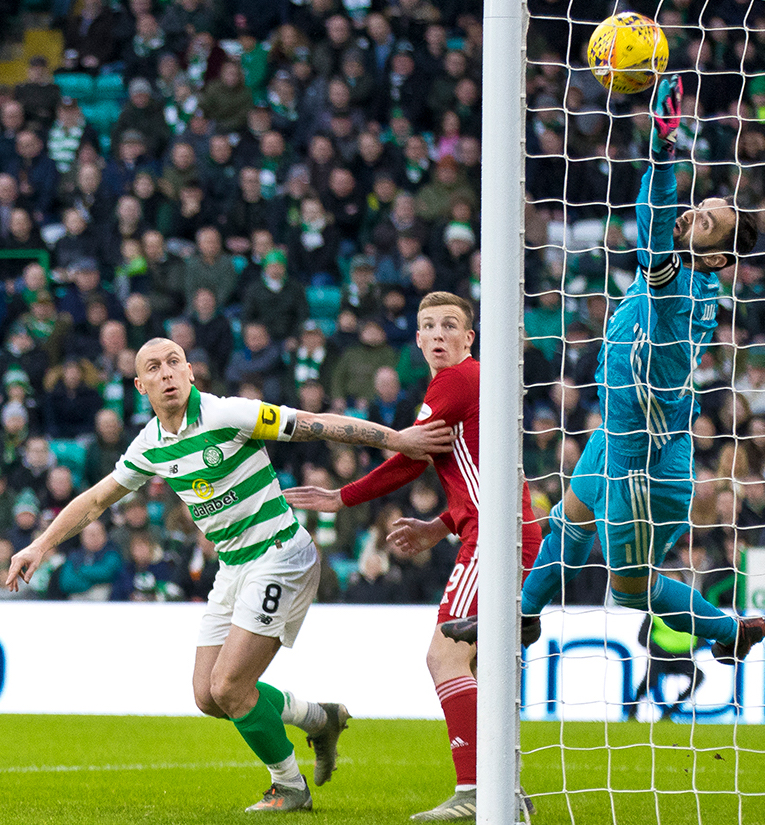 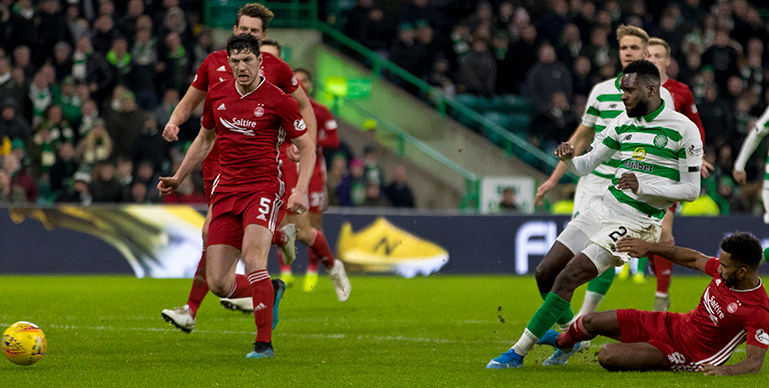 BEST FOOT FORWARD…Odsonne Edouard slides in the winner with Shay Logan too late to intervene. 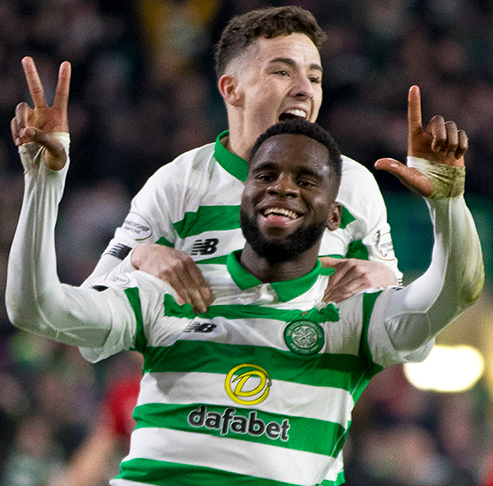 CELEBRATIONS…Odsonne Edouard takes the acclaim with Mikey Johnston joining in.

SLIDE IN TIME…James Forrest shows his composure as he knocks the ball into the St Mirren net. 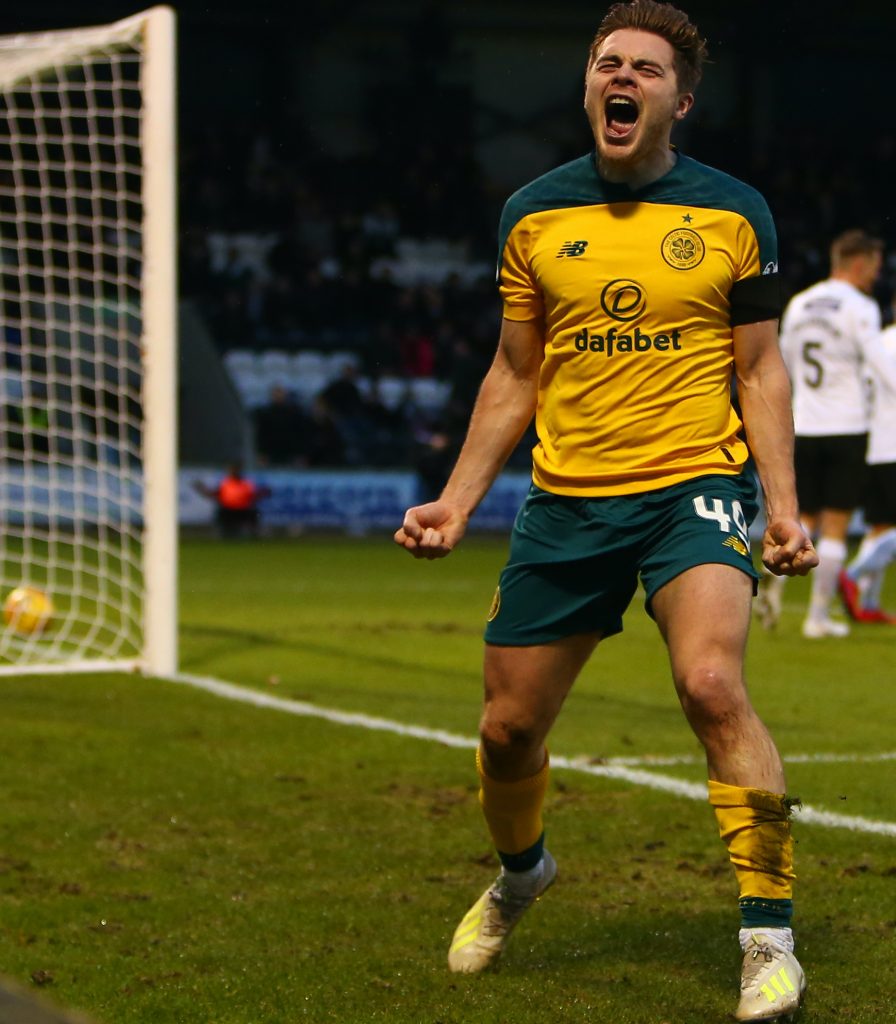 YIPPEE…James Forrest is an image of triumph as he celebrates in Paisley. 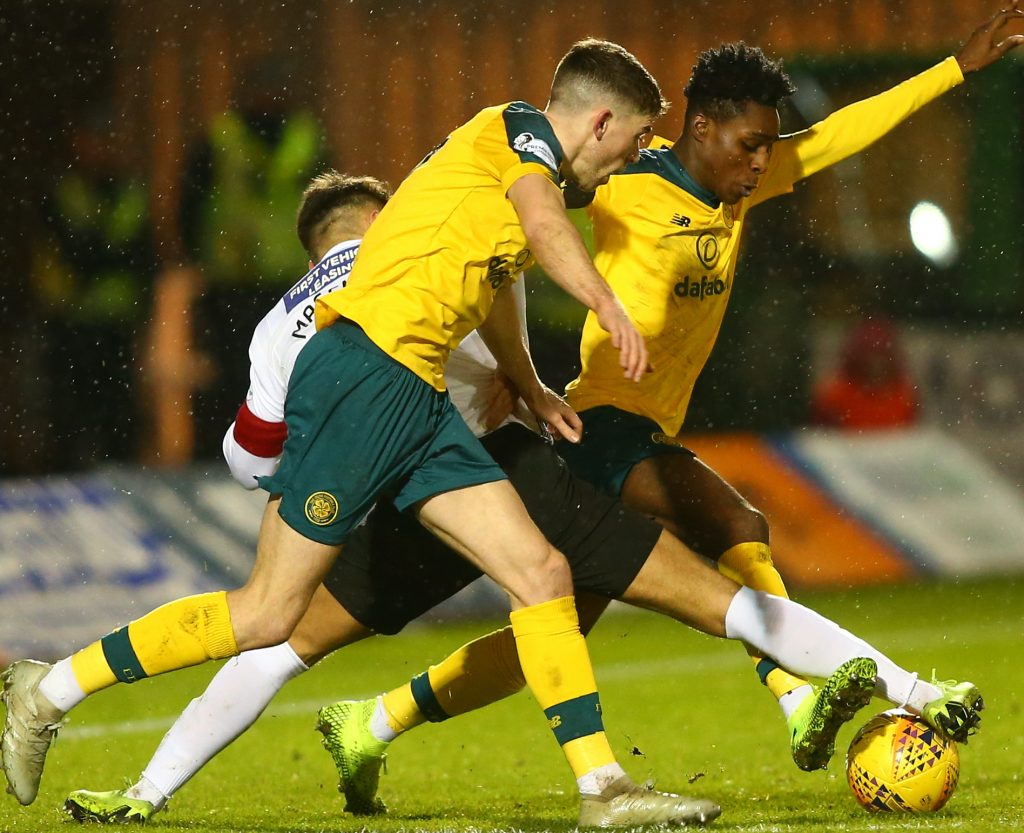 TWO INTO ONE…Ryan Christie and Jeremie Frimpong team up to win possession. 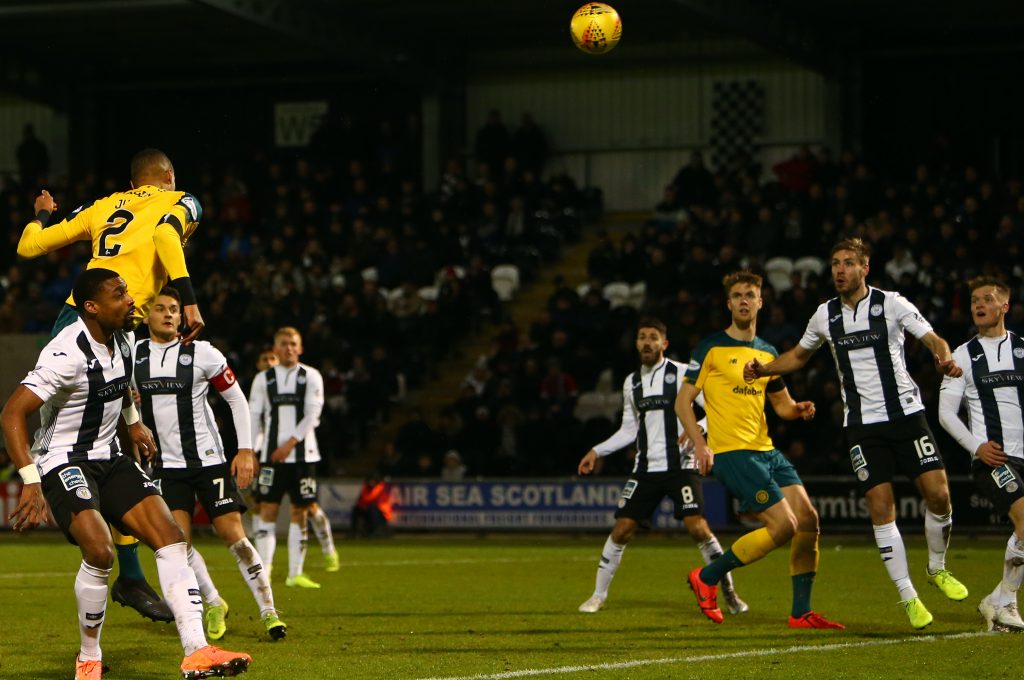 HIGH AND MIGHTY…Christopher Jullien gets in a powerful header, but is just off target as the Saints defence breathes a sigh of relief. 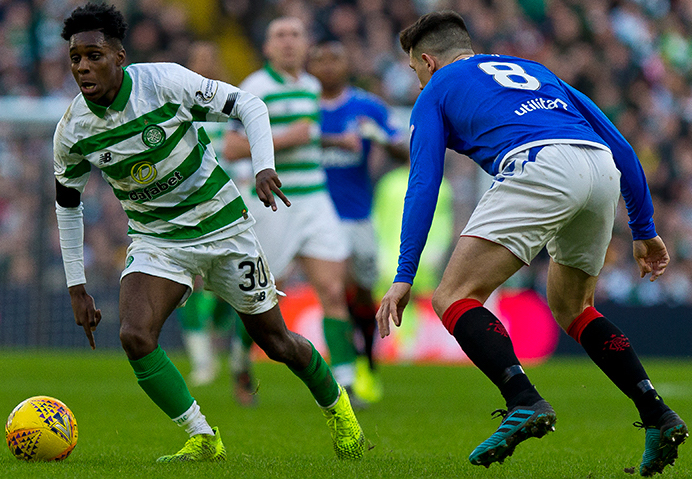 WING AND A SLAYER…Jeremie Frimpong takes on Ryan Jack. 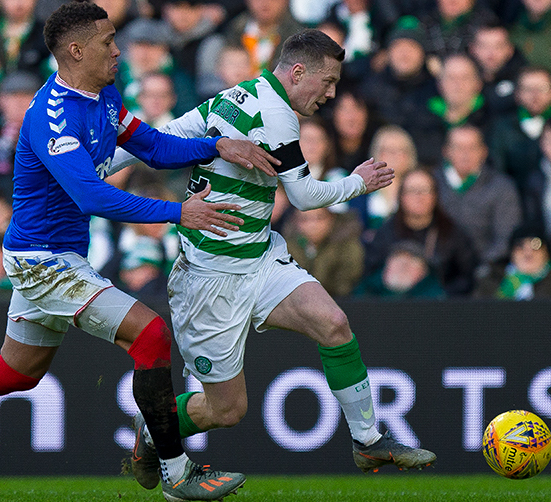 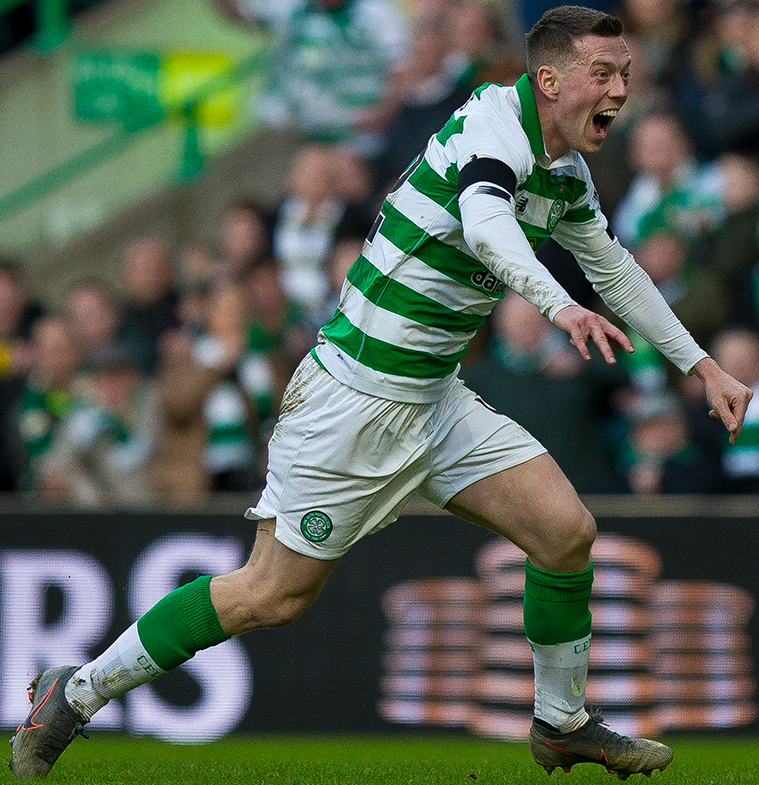 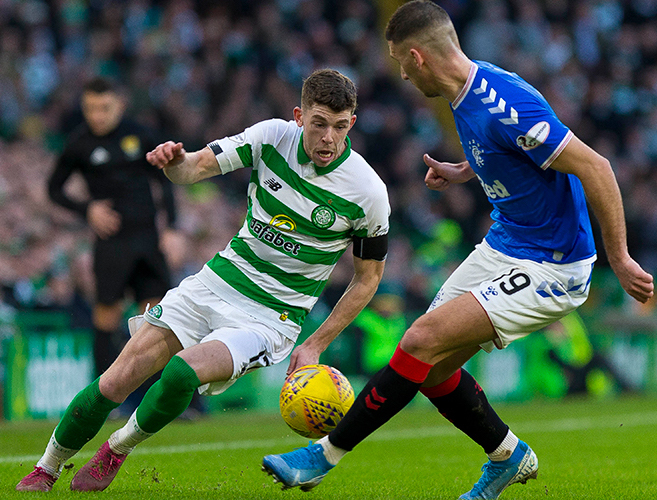 INSIDE MAN…Ryan Christie turns away from Nicola Katic. 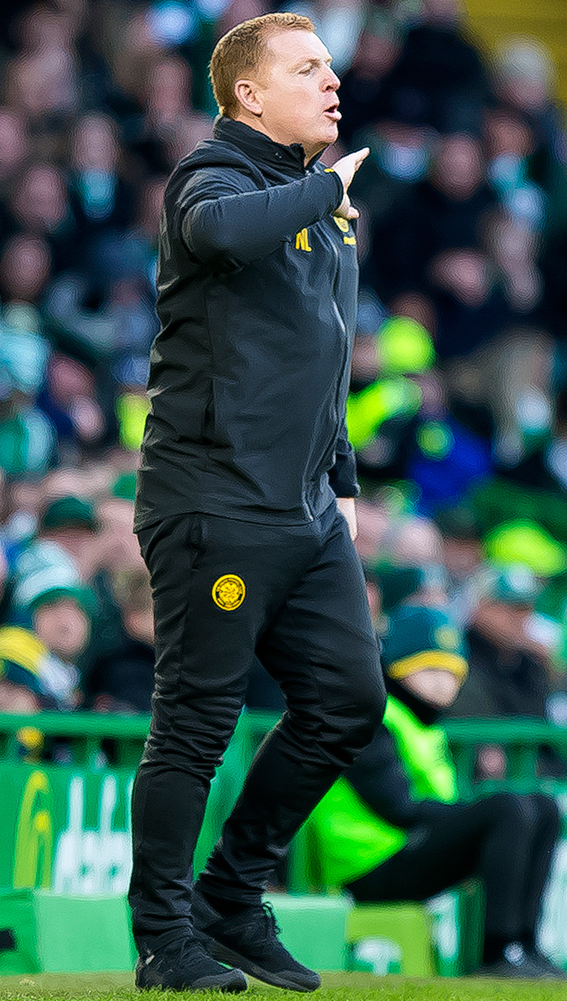 FAREWELL TO 2019…the Celtic players applaud the supporters for their backing throughout the year at the conclusion of the derby.

TOMORROW: The best in words and pics from January 2020.