HAIL the Celtic Centurians! The Parkhead side picked up their 100th piece of major silverware in a thoroughly well-merited and professional manner at Hampden this afternoon.

Brendan Rodgers beamed brightly as he won his first trophy as Hoops manager and, hopefully, it will be the first of many.

Aberdeen came to Hampden to battle all the way in the Betfred League Cup Final, but in the end they were undone by some remarkable flashes of brilliance from Parkhead performers.

Step forward James Forrest for a massive round of applause. The little winger epitomises everything Rodgers is attempting to achieve at the champions.

Under Ronny Deila, he became nothing more than a bit-part player and his career looked to be heading for the exit and elsewehere.

Against the Dons this afternoon, though, he was a player possessed, a professional driven by ambition with a compelling never-say-die attitude.

He was a nuisance all day to the Dons’ rearguard as he floated around the pitch, bursting into electrifying pace when he saw an opening and, basically, proving to be impossible to mark.

Forrest on fire is a sight to behold. He scored a magnificent second, was felled in the box for the third via the penalty spot and was in Man of the Match form.

Skipper Scott Brown, Tom Rogic, Erik Sviatchenko and Mikael Lustig also put in good shifts, but this 100th success was a team triumph – and a delight to witness. 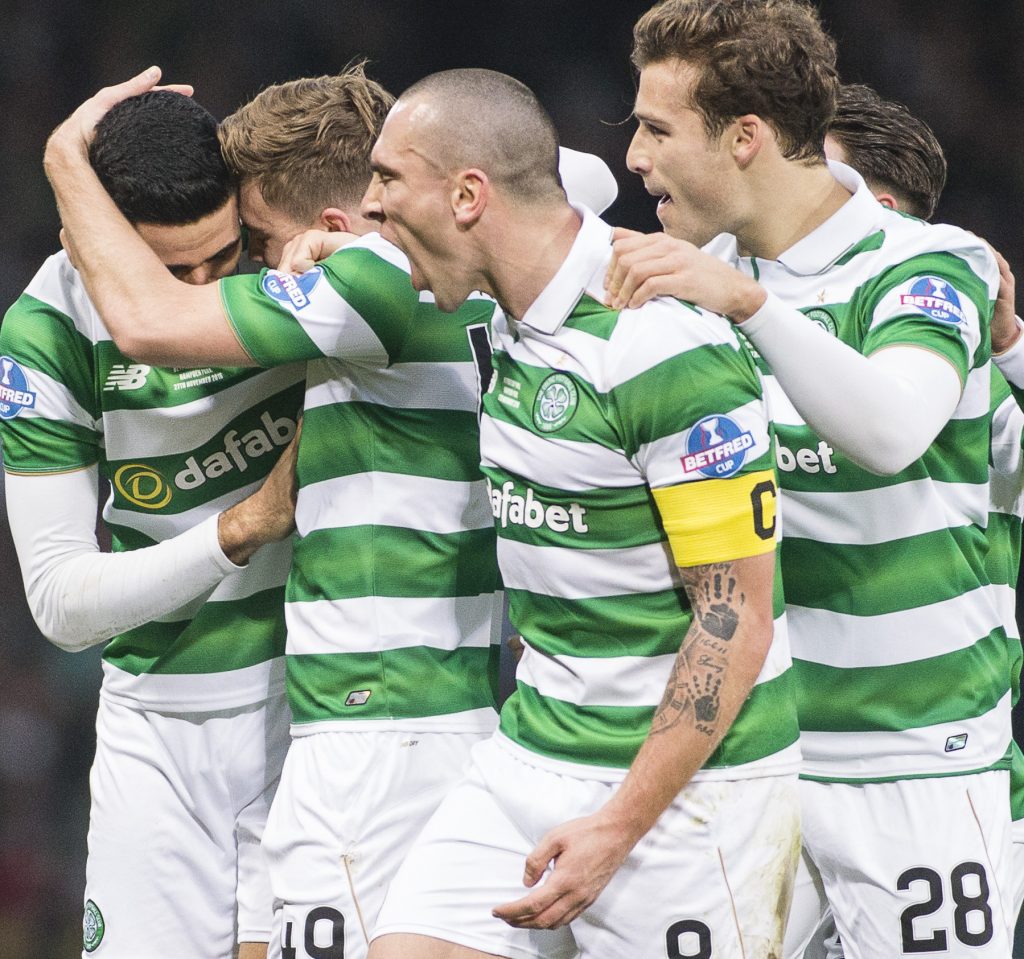 NUMBER ONE…Tom Rogic (extreme left) is congratulated by his Celtic team-mates after the opening goal.

The breakthrough goal arrived in the 16th minute and underlined the quick-thinking of the current team as they turned defence into attack.

Dons’ James Maddison drove forward and smashed a shot at goal from 25 yards which was blocked by the ever-willing Sviatchenko.

Stuart Armstrong picked up a rebound and within 22 seconds the ball was in the Aberdeen net.

The midfielder knocked the ball to Brown who pushed the pass in front of Jozo Simunovic, charging out of defence.

The Croat’s forward pass was intercepted, but he snapped onto the rebound to hit a pass to the lurking Rogic on the right.

Aberdeen were slow to react to the danger as the Wizard of Oz controlled the ball with his usual nonchalant ease.

He eased and teased his way onto his favoured left foot and, from the edge of the box, he curled a sublime low effort beyond the searching fingers of the despairing Joe Lewis.

The Pittodrie men couldn’t say they were warned – it was the third time Rogic has scored against them in three games this season.

NUMBER TWO…James Forrest races away after leaving the Dons in disarray with a wonder strike.

The second goal in the 37th minute was an invidual moment of magic from the rejuvenated Forrest as he embarked on a slalom run at the back-tracking defence.

Rogic picked him out just yards into the opponents’ half and he galloped forward determinedly with one aim in mind.

Anthony O’Connor and Andy Considine were too late with their joint challenge. Forrest, head down, ball under control, was unstoppable.

He zipped into the danger area and finished his run with a searing low drive that eluded the diving Lewis to his right.

It was a goal fit to win any Cup Final and how Forrest and his team-mates enjoyed it.

The Dons defenders knew they had been taken apart by a special player on top of his game and more than willing to deliver on the big day. 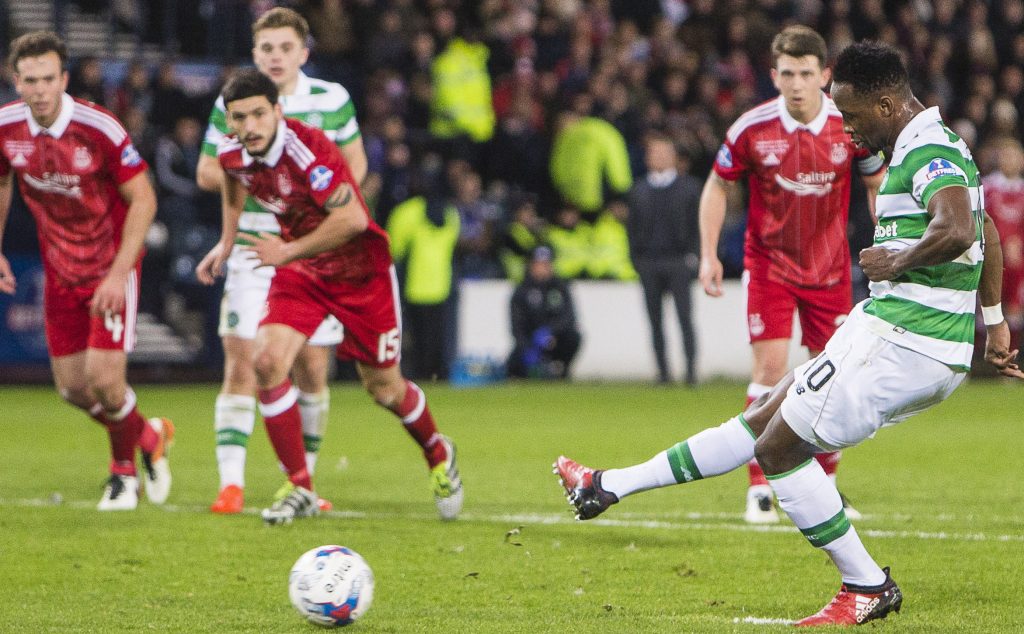 NUMBER THREE…Moussa Dembele completes the scoring with an expertly-taken penalty-kick.

And it was Forrest who was involved in the third goal in the 64th minute when he moved effortlessly onto a rolled pass by Rogic.

The despairing O’Connor lunged at the Celtic winger and there could only be one outcome as the player hit the deck. Referee John Beaton immediately pointed to the spot.

Moussa Dembele, who had been strangely subdued, placed the ball on mark before smashing it low to the keeper’s left as Lewis took off for his right.

Naturally, there were other efforts and smart interludes of play, but, at the end, when the haze cleared over Hampden, Celtic had won their 100th trophy in their illustrious 128-year history.

The green-and-white carnival kicked off there and then.

There could be treble ahead for the Century Celts.