Celtic Quick News on News Now
You are at:Home»Latest News»£2m GREEN LIGHT FOR CELTIC BID
By CQN Magazine on 11th May 2022 Latest News

CELTIC have been given the £2million green light in their pursuit of Hammarby defender Mohanad Jeahze.

Ange Postecoglou has identified left-back as a position where he needs to strengthen with Liam Scales the only back-up to Greg Taylor this season.

The Hoops boss has had to switch the naturally right-sided Josip Juranovic to the No.3 slot on several occasions throughout the campaign and he is now ready to make the Iraqi international his first signing as he begins his preparation for next season, as CQN reported last month.

Remarkably, 25-year-old Jeahaze is on the brink of becoming the Greek-Australian’s EIGHTEENTH signing inside a year. 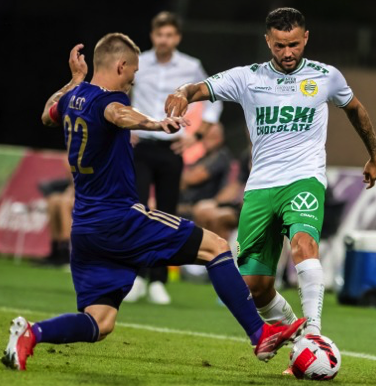 ON THE MOVE…Iraq international defender Mohanad Jeahze is heading for Celtic.
The player has decided he wants to make the move to Scotland with the clubs now finalising the contract, according to the Scottish Sun.

Jeahze is regarded as the top full-back in Sweden following an impressive term where his club have been the league pacesetters.

The Swedish-born star, who plays for Iraq through parentage, was on Polish side Lech Poznan’s wanted list in the January transfer window, but Hammarby resisted selling their hottest property until the completion of the campaign.

Four times-capped Jeahze is under contract until December 31 2023, but the Swedes are willing to cash in now.

Postecoglou wants the deal done as swiftly as possible to make sure the player is included in his squad in Austria for pre-season training.

* DON’T miss the unbeatable match report and action images from Dundee United v Celtic this evening – only in your champion CQN.