RAMPANT Celtic absolutely devastated Killie as they emphasised their credentials as the best team in the land as they thundered their way back to the pinnacle of the Premiership this afternoon.

The Rugby Park outfit took brief ownership of the top spot in midweek when they overcame Livingston and Brendan Rodgers’ men carelessly threw away two points when they allowed Motherwell a late leveller at Fir Park.

However, the title contenders were hit by a whirlwind first-half as the Hoops kicked off at breathtaking pace and kept their foot on the accelerator as they zipped to a remarkable 4-0 advantage.

Celtic’s game-plan would have undoubtedly included an early goal and they got off to a flyer when James Forrest provided a marvellous touch to claim his 10th strike of the campaign.

There were only five minutes on the clock when Emilio Izaguirre, making a rare first team appearance in place of the rested Kieran Tierney, set it up with an inviting cross from the left. 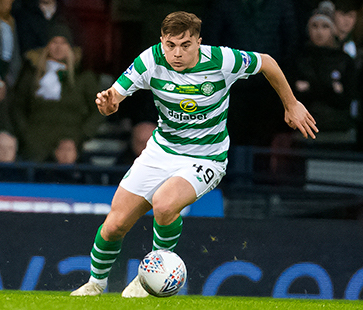 On-fire Forrest, a man in the form of his life, didn’t hesitate as he drilled a left-foot effort beyond the helpless Daniel Bachmann for his first of his twosome.

In the 12th minute, Tom Rogic came close to doubling the Hoops’ advantage with a strong drive, but the keeper was alert to the danger to thwart the the playmaker.

Brendan Rodgers’ men were swarming all over their opponents as they went for the jugular in an attempt to kill off Steve Clarke’s rattled side who weren’t getting the opportunity to draw breath.

Aaron Tshibola, who set about former team-mate Youssouf Mulumbu in the September clash at Rugby Park, was fortunate to escape a booking by referee Nick Walsh – who had previously yellow-carded Jozo Simunovic – for a foul on the eager Rogic.

Bachmann was then forced to a swoop low to his post to deny another effort from the elegant Aussie.

There was a moment of menace in the 22nd minute when Jordan Jones flashed in an angled left-foot effort which was pushed away by Craig Gordon and hastily cleared by Filip Benkovic before Greg Stewart could pounce. 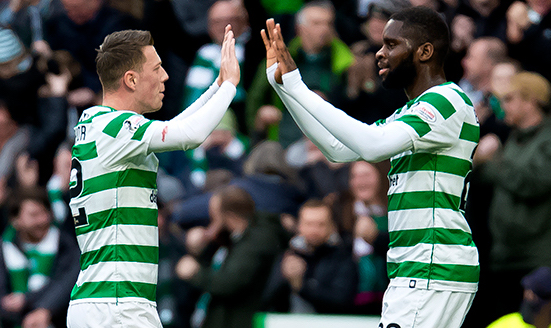 Three minutes later, there was a scorching move forward against the retreating Killie back lot and Odsonne Edouard got involved in the build-up play before Rogic released him as he powered into the box.

The £10million Frenchman kept his composure as two defenders converged and Bachmann sprinted from goal. He had no no doubt where the ball was going and he thumped a right-foot shot into the enticing net for the second.

It was no more than Rodgers’ men deserved as they dominated proceedings and the Ayrshire outfit relied, as ever, on breakaways.

Simunovic added his power to attack to send in a header and once again the Killie No.1 was scrambling to keep the score down.

It was all over as a contest in the 35th minute when the Hoops claimed a third goal. Stephen O’Donnell, who had just been booked, was penalised again when he decked Edouard on the edge of the box on the left.

Callum McGregor sized up the situation before sending a cute and accurate left-foot free-kick to the near post. Mikael Lustig, without a goal this season, rectified that situation as he raced in front of the defence to get his right foot to the ball and send his close-range effort hurtling past Bachmann at his right-hand post. 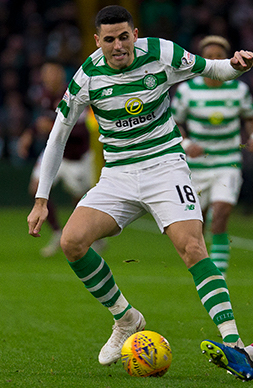 IN CONTROL…Tom Rogic cruised for over an hour.

The champions were sparkling in the rain as they took total control of the confrontation and Ryan Christie was strolling through the game without putting a foot wrong.

McGregor was in similar mode and the visitors were chasing shadows as they attempted to close down their unstoppable opponents.

On the stroke of half-time, Christie swept in a magnificent left-footed 25-yard free-kick that left Bachmann stranded as it clattered the net behind him.

Scott Boyd had given away the award with a bad challenge on Rogic, but, once again, Walsh kept his cards in his pocket.

Four scintillating goals ahead at the interval and the home support celebrated big-style as Rodgers prepared to claim his first victory over Clarke at the fifth attempt.

Seven minutes after the turnaround, referee Walsh stunned the home players and fans when he gifted Killie a penalty-kick following a Benkovic tackle on Rory McKenze. It didn’t even look like a foul and it was debatable it was inside the box, but the award stood and Eamonn Brophy’s drive from the spot went under Gordon’s body as he dived to his left.

It was a shocker from the whistler who had been baffling everyone with his decisions from the start. Shortly after the goal, Alan Power and Stewart were booked in quick succession.

In the 56th minute, Forrest had a low drive that cannoned back off the keeper’s right-hand post after Edouard hadn’t been quick enough to set up Scott Sinclair. The ball broke to Rogic who nudged it to the Scotland international winger who arrowed an angled shot past Bachmann only to be denied by the woodwork.

But 11 minutes later, Forrest got his reward with the fifth goal. Christie timed his run into the opposition’s penalty-box to perfection, but was sent tumbling by the sprawling Bachmann.

It could have been a spot-kick, but the ball broke to the Scotland international attacker and he rattled a right-foot angled drive into the roof of the net. 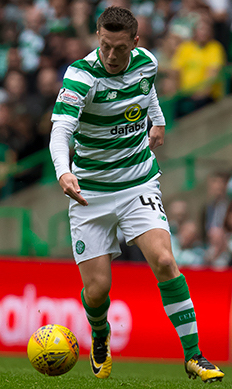 A mere four minutes afterwards, Sinclair knocked on wood, too, when he curled a beautiful effort over the keeper from the edge of the box, but this time the ball crashed against the crossbar and rebounded to safety.

Celtic came forward in waves and the ref denied them what looked a certain penalty-kick when Greg Taylor bundled into the back of Forrest and flattened the forward. Astonishingly, Walsh looked the other way.

Rodgers sent on Olivier Ntcham for Rogic and followed that by introducing Leigh Griffiths for Edouard. Skipper Scott Brown was the final change when he came on for Christie in the 77th minute.

Izaguirre was booked for a sliding challenge before Sinclair sped past two defenders before just missing the target.

So, a satisfying job completed this afternoon, the champions reinstated to their accustomed pole position and now all eyes are on Thursday when RB Salzburg arrive at Parkhead for the final encounter in Europa League Group B.

Rodgers’ side require a draw to make certain their European adventure continues after the turn of the year. On this form, with this attitude, one point will not be beyond this team,