Celtic Quick News on News Now
You are at:Home»Latest News»‘A LOT OF PEOPLE WERE POINTING THEIR FINGER AT ME’: JOHNSTON’S FINAL TARGET
By CQN Magazine on 4th December 2019 Latest News

MIKEY JOHNSTON has fired blanks in his past three games against Steven Gerrard’s Ibrox outfit.

Brendan Rodgers played the Scotland Under-21 forward as the main attacker in the 1-0 loss in Govan a year ago. He kept Odsonne Edouard on the subs’ bench at the start in a game-plan that back-fired.

Neil Lennon handed the role to Johnston in April last season after the eighth successive Premiership title had already been won, but again there was no joy as the Parkhead side lost 2-0 in a meaningless encounter.

He played in a more orthodox support role on September 1 at the same venue when goals from Edouard and Jonny Hayes gave the visitors a 2-0 win.

However, the 20-year-old raider insisted he would happily take over pole position if the French ace, who will miss his third consecutive game when the Hoops welcome Hamilton Accies this evening, fails to respond to treatment before Sunday’s Betfred League Cup Final against their Glasgow neighbours. 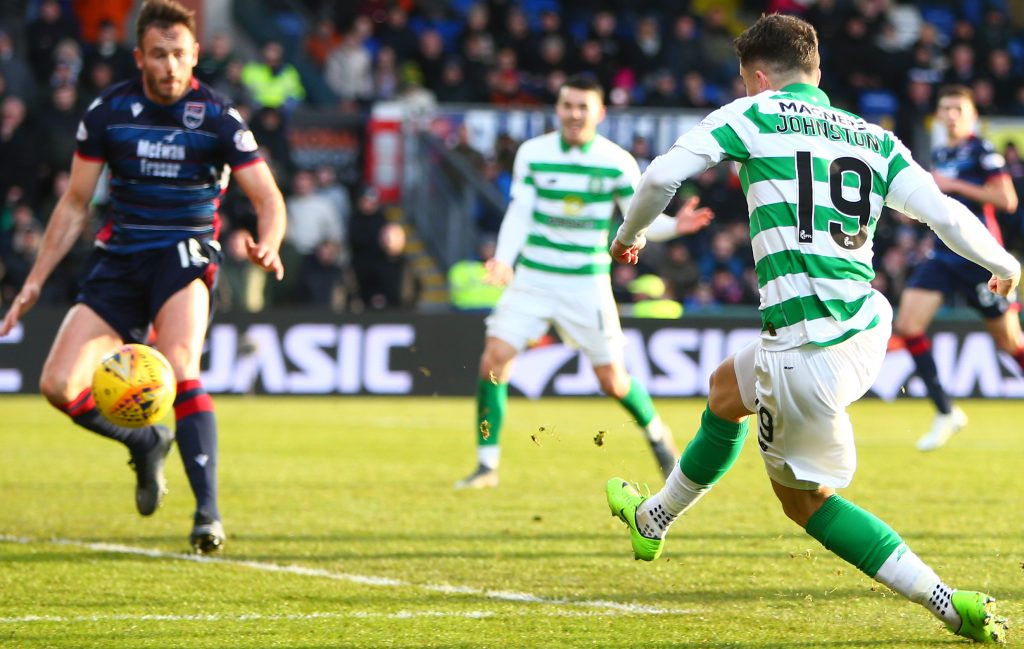 BY THE RIGHT…Mikey Johnston scores a quickfire goal after his introduction against Ross County.

Johnston is making his way back to match fitness following an injury in the victory at Ibrox three months ago and has scored on his two substitute appearances against Rennes in the 3-1 Europa League win last week and against Ross County in the 4-1 Premiership triumph on Sunday.

The Glaswegian, speaking to the Evening Times, said: “Odsonne might be back in, but wherever I play – if I play at all – I’ll be happy.

“Playing up there at Ibrox was tough, but it was something I wanted to do and it didn’t go as badly as some people made out, although a lot of people were pointing their finger at me.

“We didn’t lose that game just because I was up front – a lot of things went wrong for us that day. These are the sort of games you want to play in and you need to come through the losses stronger.

“I’ve had that experience now and I hope it stands me in good stead.”

Lennon gave Johnston the nod to start last season’s Scottish Cup Final against Hearts on May 25, but he was withdrawn in the second-half with Scott Sinclair taking over.

Edouard, of course, scored the goals that gave the champions a 2-1 victory to seal the unprecedented treble treble.

Celtic are looking for their TENTH successive domestic honour at Hampden at the weekend.

* DON’T miss the unbeatable match report from Celtic v Hamilton Accies this evening – only in your champion CQN.