Celtic Quick News on News Now
You are at:Home»Football Matters»AITCHISON HAT-TRICK GIVES CELTIC CLEAN SWEEP IN TITLE WINS
By CQN Magazine on 30th May 2016 Football Matters
CELTIC’S teenage record-breaker Jack Aitchison netted a 12-minute hat-trick as the Hoops overwhelmed Hamilton 5-0 to seal the Under-17 title. The Development Squad won their league without losing a game and Ronny Deila led Celtic’s first team to 5 in a row as Celtic dominance of Scottish football – at all levels, continues.
They were already leading with goals from Ross McLaughlin and Michael Johnston before the striker claimed his trio in whirlwind fashion at Lennoxtown. 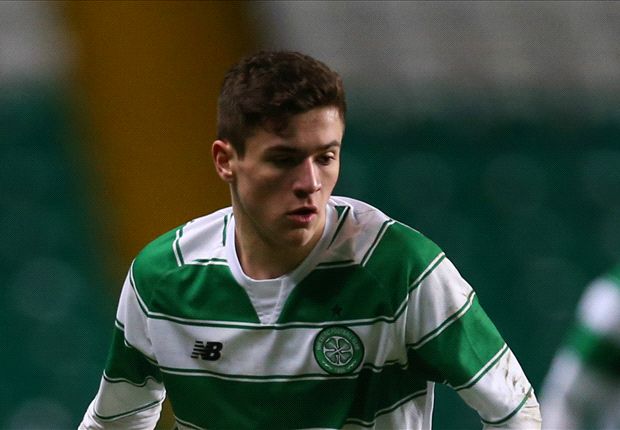 Aitchison, who became the club’s youngest-ever player at 16 years and 71 days when he came on and scored against Motherwell in the last game of the season, struck his first in the 64th minute and added a second eight minutes later.
He completed the treble in the 76th minute and Celtic will take part in the UEFA Youth League again next season.
In the final game of the season, Michael O’Halloran’s side required at least a draw against Accies to claim the championship and make it a domestic double following their Glasgow Cup success.
However, they completed the campaign in style with McLaughlin opening the scoring in the 11th minute and Johnston doubled the advantage nine minutes after the interval.
Then Aitchison took over to end a dream season.
———————————————-
Three weeks to Father’s Day. Why not order a SIGNED copy of Lisbon Lion Charlie Gallagher’s new biography from CQN Bookstore and we’ll send you a FREE copy of The Winds of Change. One for you, one for your dad. Then swap!
Just order the Charlie Gallagher book HERE and we’ll do the rest!