Celtic Quick News on News Now
You are at:Home»Latest News»ANGE TO GO FOR KO?
By CQN Magazine on 18th May 2022 Latest News

ANGE POSTECOGLOU is pondering adding to his Japanese contingent by moving again for the one who got away.

Postecoglou was aware Kristoffer Ajer was on his way, Shane Duffy had already returned to Brighton after a disastrous loan season while there were still injury doubts over Christopher Jullien who hadn’t kicked a ball since his knee injury sustained against Dundee United the previous December.

FLYING THE FLAG…Ko Itakura celebrates after helping Schalke back to the Bundesliga.

Ko Itakura, a player he knew during the centre-back’s time as a team-mate of Reo Hatate at Kawasaki Frontale in the J-League, was on his radar with Manchester City willing to allow their international defender to go out on a 12-month loan deal, as CQN reported last summer.

However, in the midst of some feverish transfer activity, the 25-year-old, 6ft 3in ball-playing pivot agreed a temporary switch to Schalke, then in the German second tier.

Itakura scored four goals in 31 league appearances as he helped the side to promotion to the Bundesliga, but reports in local media suggest the club do not have the finances to make the deal permanent.

Pep Guardiola’s outfit are looking for something in the region of £5.5million for a player who cost them only £630,000 when they signed him from Japan in June 2019.

He has yet to make a first-team start at the Etihad and spent two and a half years with Dutch side Groningen before his loan to Schalke. 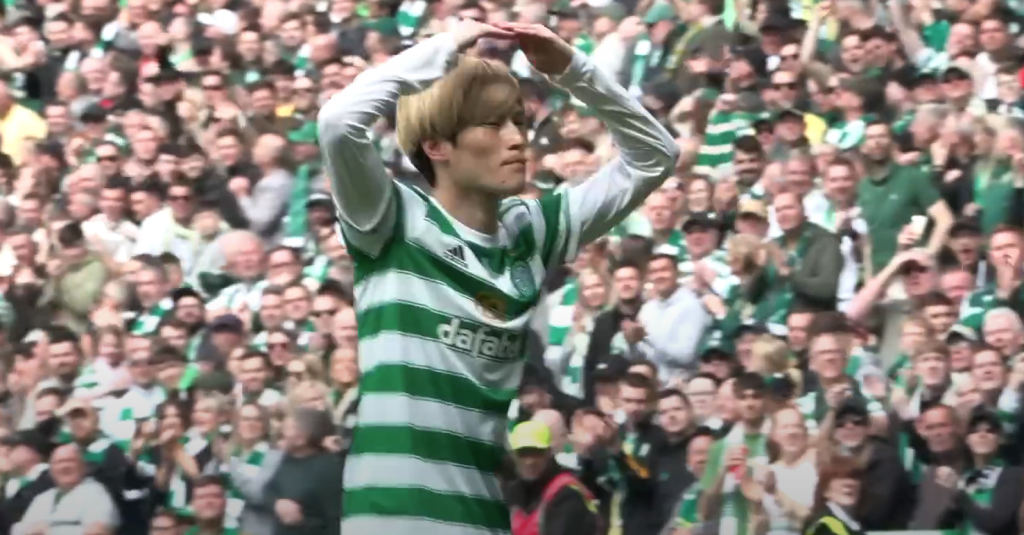 CROWDPLEASER…fans’ favourite Kyogo Furuhashi celebrates his 20th goal of the season in the 6-0 rout of Motherwell at the weekend.

Postecoglou has once again identified the middle of the reaguard as a position that needs reinforcements and, irrespective of whether Cameron Carter-Vickers remains or returns to Spurs, the Hoops boss has every intention of bringing in defensive recruits with left-back also targeted.

The 56-year-old title-winning manager has already spent something in the region of £9million bringing in four players from the J-League with 20-goal striker Kyogo Furuhashi the first to arrive in a £4.6million switch from Vissel Kobe in July.

Fellow-internationals Hatate, a classy midfielder who hit the ground running, pacy frontman Daizen Maeda, from Yokohama F Marinos, and anchorman Yosuke Ideguchi, from Gamba Osaka, all arrived on Hogmanay to help in the push for the club’s tenth championship success in 11 years.

Itakura may now get the opportunity to join his compatriots a year later than had apparently originally been scheduled.