Celtic Quick News on News Now
You are at:Home»Latest News»BARKAS OR BAIN? ‘I DON’T THINK ANYONE IS No.1,’ ADMITS BOSS
By CQN Magazine on 28th July 2021 Latest News

ANGE POSTECOGLOU is holding off naming his keeper for the crucial Champions League qualifier against FC Midtjylland in Denmark this evening.

Already there are question marks over Vasilis Barkas, who faced a torrid introduction to Celtic following his £4.5million arrival from AEK Athens last summer.

The error-prone Greek was eventually axed by exasperated Neil Lennon in January after two unconvincing displays at Ibrox (0-1) and Livingston (2-2) where five points were surrendered during the Hoops’ quest for a historic tenth successive title which ended in catastrophe and the Irishman losing his job in February. 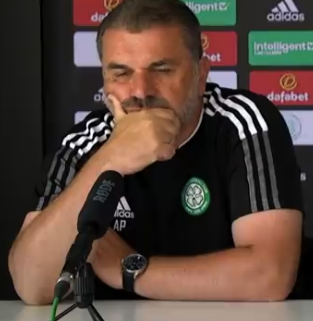 The most expensive netminder in the club’s history played 22 times across all competitions last time out, but, significantly, he made only three appearances in the final 19 league games of the campaign. He was ditched from the line-up for the delayed Scottish Cup Final against Hearts on December 20 when rookie Irishman Connor Hazard taking his place and made two dramatic penalty-kick saves in the shoot-out as the Parkhead side sealed the phenomenal quadruple treble.

Barkas was the fall guy again last week with a dreadful flapping attempt that failed to prevent the Danes’ second-half equaliser which came straight from an angled direct free-kick from Brazilian Evander.

He conceded three in the first-half in the 6-2 thumping from West Ham on Saturday and his positioning for the second goal from Michail Antonio was nothing short of amateurish, as CQN highlighted.

Bain came on at the interval and he, too, lost three goals while failing to impress Lennon’s successor.

Now the question is: Barkas or Bain? And even the former Australia international manager seemed undecided as he pondered the poser.

Postecoglou refused to be drawn on whether he would retain faith with Barkas or turn to Bain. The Hoops gaffer, speaking to the Scotsman, said: “Apart from the first leg, consistently through pre-season, Bainy and Barky have shared the duties.

“I don’t think anyone is number one. They are competing for spots. I’ll see how everyone trains and select a team from there. In terms of Bainy, he’s been very good in training and games. I made a call to play Barky in the first game and I’ll make a call on the second game after training.”

The long-term answer may yet be found in the transfer market.