CELTIC are in negotiations with Spurs for 34-year-old former England keeper Joe Hart, a report claims.

The veteran netminder was also linked with the Hoops last summer after being released by Burnley, but was snapped up on a two-year contract by Jose Mourinho, the London club’s ex-manager.

Hart, though, did not play a solitary Premier League game although he did make 10 appearances in other competitions.

New Spurs boss Nuno Espirito Santo, a former Portuguese goalkeeper who arrived in the summer after quitting Wolves, could be interested in offloading the one-time Manchester City hero. 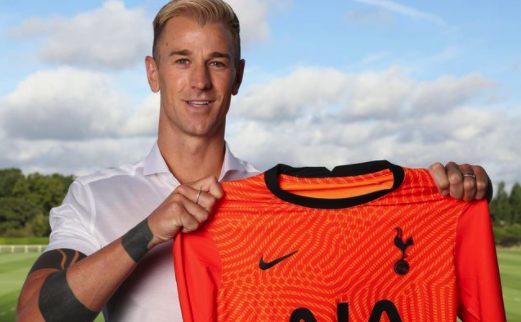 LONDON CALLING…Joe Hart with the Spurs shirt after signing from Burnley in August 2020.

Ange Postecoglou admitted in CQN earlier today that he did not know who was his number one between Vasilis Barkas and Scott Bain and he refsued to say who would be in charge of the gloves against FC Midtyjlland in the Champions League crunch qualifier in Denmark tonight. A blunder by the £4.5million Greek gifted the Danes an equaliser in the 1-1 deadlock in the first leg second round qualifier last week.

The Former Australian manager was reported to be contemplating a reunion with his former international shotstopper Mat Ryan before he agreed a switch from Brighton to Real Sociedad last month.

It’s an interesting scenario with the Hoops struggling in the No.1 position all last season with Northern Ireland rookie Connor Hazard also vying for a top team place alongside Barkas and Bain.

CQN did suggest earlier that the long-term solution could be found in the transfer market. Whether Hart, picking up over £50,000-per-week as a reserve, is that answer remains to be seen.