KRISTOFFER AJER was fortunate to escape injury in the “dangerous” challenge that earned Aberdeen striker Sam Cosgrove a straight red card in Celtic’s 2-1 win at Parkhead.

That is the no-nonsense verdict of his fellow-Hoops defender Boli Bolingoli who saw the Norwegian go down after a wayward tackle from the Englishman.

The Hoops were leading 2-1 at the time of the explosive incident through goals from French double-act Christopher Jullien and Odsonne Edouard.

Ajer was accused of “winking” and “laughing” by Dons boss Derek McInnes as referee Euan Anderson banished his towering frontman.

But Bolingoli, speaking to the Daily Record, insisted: “I didn’t really see it well, but it was a dangerous tackle.

“Kristoffer had his feet on the ground and if he comes in like that, it can be dangerous. 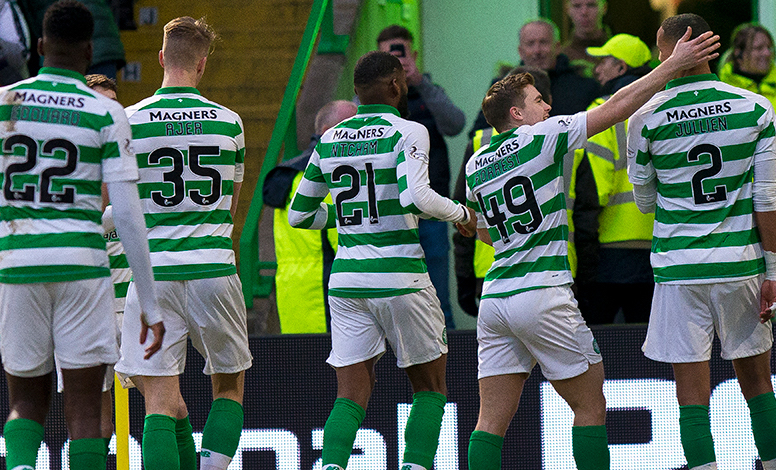 “The referee made a good decision to give a red card because what the Aberdeen player did could be very dangerous.

“The referees do their job. They sometimes make wrong decisions, but they have assistants to help.”

For the third successive Premiership outing, Neil Lennon’s men dominated proceedings yet they have only managed to claim two goals in each encounter against Hibs (2-0), Hearts (2-0) and Aberdeen (2-1).

Bolingoli added: “We we had a lot of chances. We only scored two, unfortunately, but it could have been many more.”

The firing squad will get a chance to up their ratio when they face St Mirren in Paisley on Boxing Day and again when Steven Gerrard brings his Ibrox team to Parkhead a week on Sunday.