FORGOTTEN man Cristian Gamboa is determined to make his mark at Celtic this season.

The Costa Rican international right-back returned to the big-time in midweek when he played in the 3-1 Champions League qualifying win over Rosenborg.

Now the 28-year-old defender is hoping to get the nod from Brendan Rodgers to face the Norwegians in the second leg in Trondheim on Wednesday.

Gamboa, bought for £1.2million from West Brom in August 2016, made only three first team appearances last season – and one of them was the 3-0 mauling from Bayern Munich in Germany in October.

Now, though, Gamboa is focused on making up for lost time and he believes he can use the World Cup Finals in Russie in the summer as his inspiration.

He said: “I had to stay professional last season.

“It’s difficult sometimes for your head, but I always gave my best in training or when I got a game.

“The World Cup has been good for me. I got a run with Costa Rica and I’ve come back to Celtic hoping for the same.

“Going to Russia 2018 has helped a lot – it boosted my confidence again. 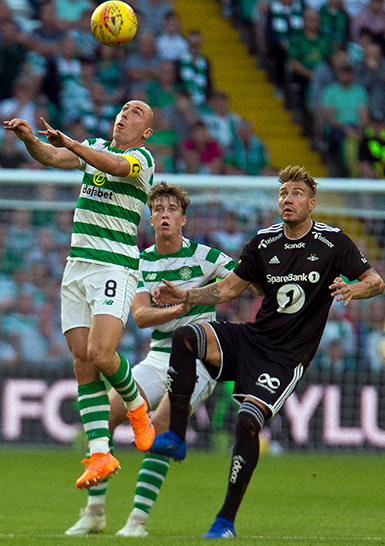 UP AND AT ‘EM…Scott Brown clears from Rosenborg dangerman Niklas Bendtner with Jack Hendry looking on.

“I’ll keep going here, I’ll continue to work hard. There are a lot of good players at Celtic, but that’s the way it is at a big club.

“The manager at Celtic spoke to me when I got back. We had a chat and he gave me a game against Rosenborg. Now I’m looking forward once more.

“I enjoyed the game on Wednesday night and it was important to me because it was against my old club.

“It was a special night and it was nice to be back in the Celtic team.

“The manager knows I can perform in games like that, especially so soon after the World Cup. He trusts me in these type of games, so I’m happy about that.

“And I’m still happy here. I’ve always said it’s a fantastic club, my family are happy in Scotland and I’ve still got another year left on my contract.”

Mikael Lustig has also returned from the World Cup Finals after his exploits for Sweden and could be in Rodgers’ thoughts ahead of the Trondheim encounter.

But Gamboa believes his speed gives Celtic a different outlet – and he’d love to start at the Lerkendal Stadium after spending three years at the Norwegian club.

He added: “I know a lot of people and still have many friends at Rosenborg, so it would be nice to play there again.

“Myself and Mika are different types of player, so it depends on the system the gaffer wants to play.

“If he wants an offensive full-back, I’m here. If he wants someone a bit more defensive, he has Mika. But he has two good options, two World Cup players.

“Rosenborg have kept six or seven players from my time, so they have a solid base. And their formation is 4-3-3, that will never change.

“They will try to get an early goal, but that will be tricky for them because we have good players up front.

“They’ll need to be aware of that and I expect another open game on Wednesday. We need to be careful – but we always score.”