SCOTT BROWN is second only to the legendary Billy McNeill in the list of great Celtic captains.

One-time Hoops team-mate Kris Commons paid the overwhelming tribute to the 35-year-old who will leave the club since 2007 after glorious service at the end of the campaign, as CQN reported.

Brown, bought by Gordon Strachan from Hibs for £4.4million, will kick his last ball for the club at the completion of the season in May to take up a two-year contract at Aberdeen where he will be a player-coach alongside his long-time friend Stephen Glass, a former Easter Road team-mate.

Commons said: “It’s the end of an era as Scott Brown leaves Celtic after 14 years. So how will history judge his achievements at Parkhead? 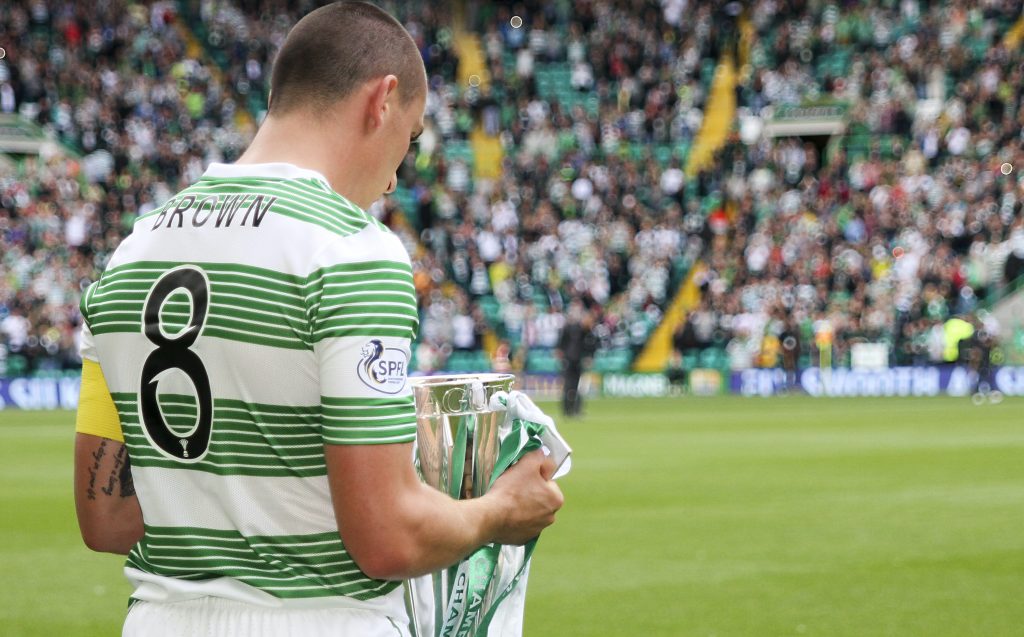 JUST CHAMPION…Scott Brown walks on with the league title silverware before the new season kick-off against Ross County on August 3 2013.

“Well, Billy McNeill obviously stands on his own as the club’s finest-ever skipper after lifting the European Cup in 1967 and winning nine in a row.

“But I’d put Brown right up there amongst any of the other great Celtic captains.

“In terms of his incredible trophy haul of 22, his longevity and professionalism, his commitment to the club amid interest from England and Australia, and the way he drove up standards in the dressing room under various managers, he deserves every accolade coming his way.

“A lot of people think of him with the shaved head, eyes bulging, standing in the tunnel like a man possessed waiting to go into battle in front of 55,000 fans. That’s Broony!

“Yet his team-mates will also think of the super-generous guy who would do anything for anybody and who did so much charitable work behind the scenes at Celtic.

“That’s the Scott Brown that will forever be remembered and appreciated by myself.” 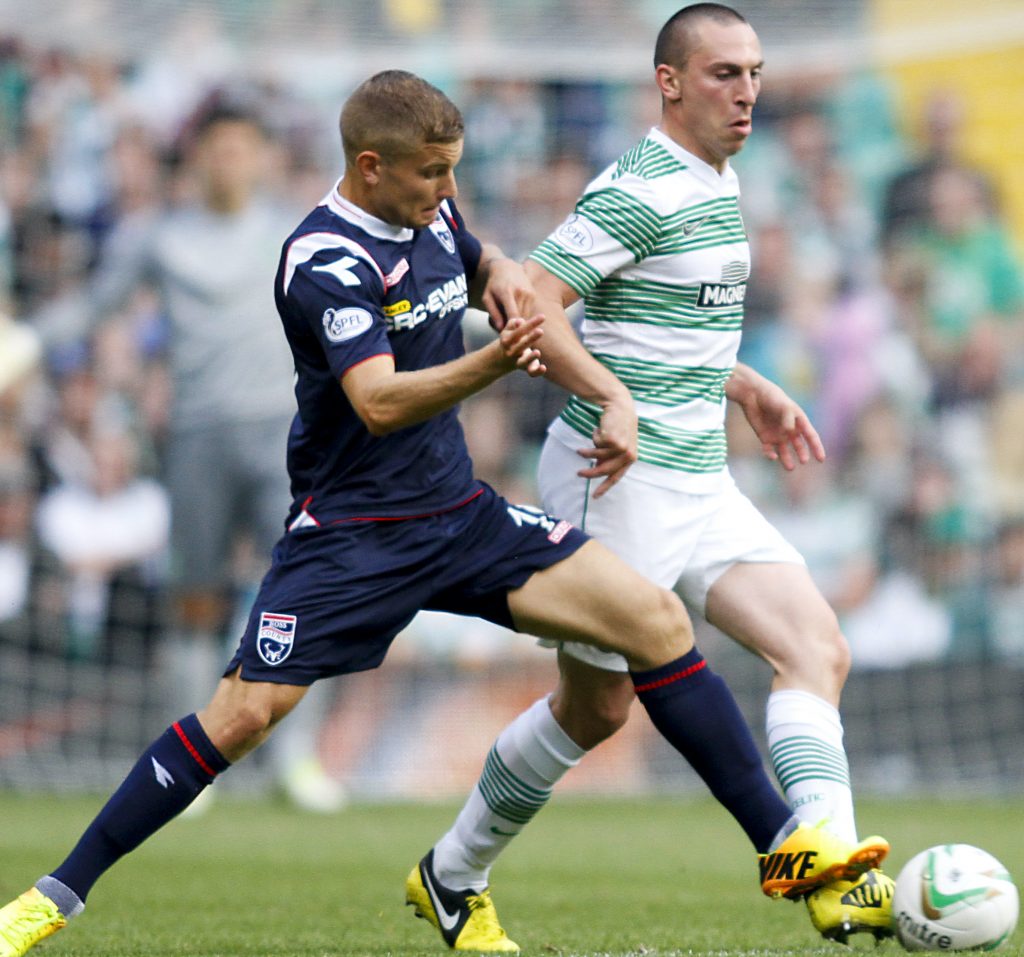 I’M IN CHARGE…Scott Brown wards off a Ross County challenge. 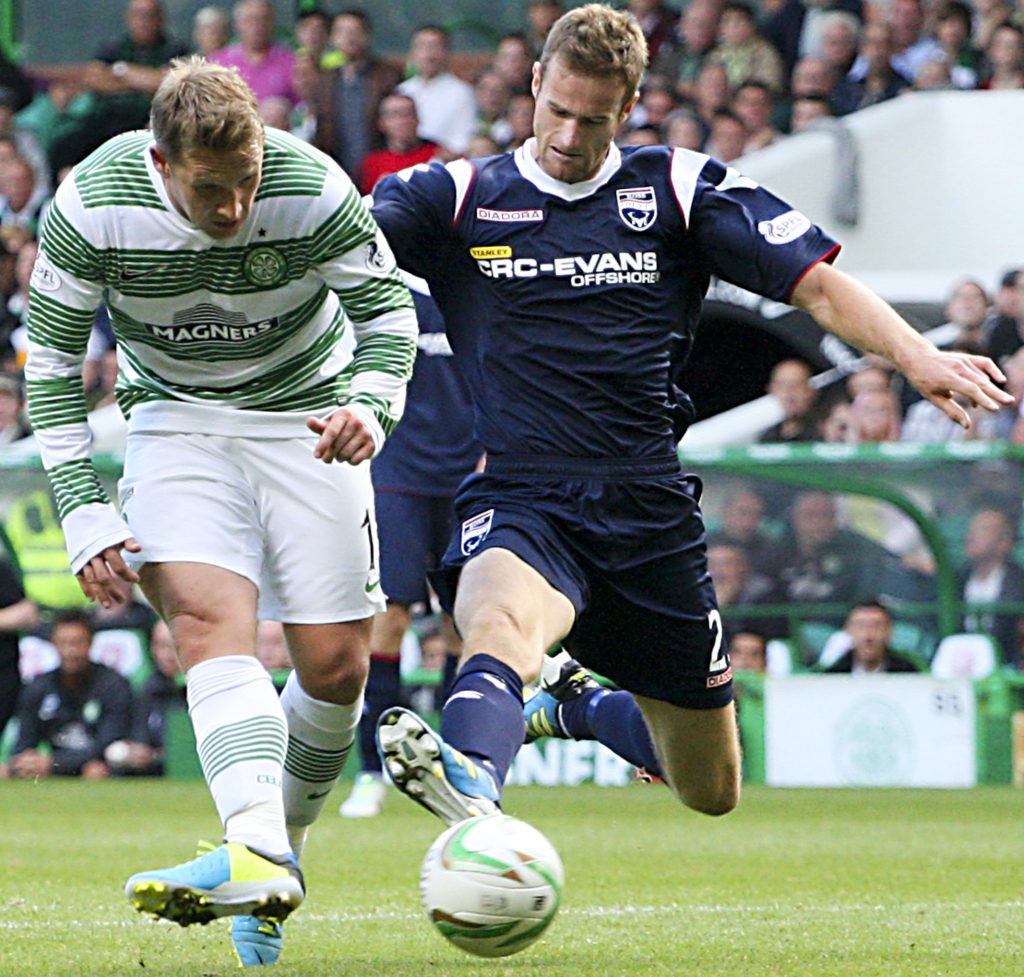 BY THE RIGHT…Kris Commons fires in a shot in the game against the Highlanders which the Hoops won 2-1.

Commons, speaking to the Mail online, continued: “I do find it baffling that Celtic are letting him walk.

“At the start of the season, when the club were going for 10 in a row, if anyone had said they’d end up looking for a new manager, a new chief exec and a new captain — and potentially not win a trophy — you’d have thought: ‘What on earth happened there?’

“It’s astonishing he’s not been offered a similar coaching role at Parkhead to the one he’s taken on at Aberdeen. He could still be a player-coach at Celtic next season, no question.

“But their loss will be Aberdeen’s gain. He’ll drive up standards at Pittodrie without a doubt.

“If Scott Brown walked into a dressing room and I had my boots on, I would automatically go up a couple of notches to impress him.

“You only have to look at the Aberdeen statement to see how much they value his experience and his winning mentality.” 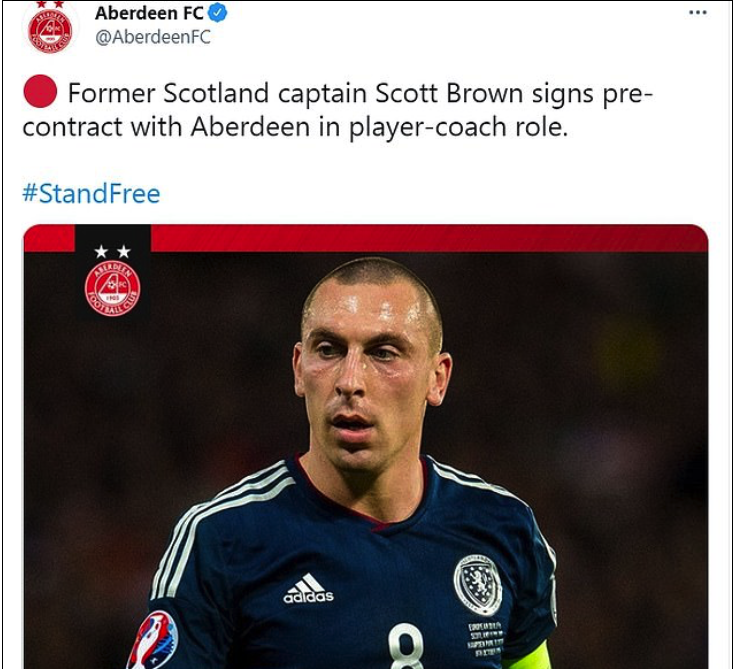 Former club and country team-mate Commons added: “But why is that being allowed to walk out of Celtic Park?

“Will Brown be back at Celtic one day? I think he could be a manager-in-waiting.

“He’s arguably Neil Lennon’s protege. He played against Neil, he played alongside Neil, and he gave Neil his best years.

“But management comes with a huge amount of pressure and expectancy. Take Frank Lampard, for example. He’s Chelsea’s record scorer and, within 18 months, was shown the door at Stamford Bridge.

“It’s a cut-throat business, so it’s extremely risky to put yourself in the firing line when you have a legacy at that same club as a player.

“But what Scott Brown has achieved as a player at Celtic Park will stand the test of time.

“The fact he’s not had as much game time in his last season, and the fact Celtic did not make it to 10 in a row, should in no way tarnish his legacy.”