Celtic Quick News on News Now
You are at:Home»Latest News»BROONY: NO PLACE FOR SENTIMENTALITY IN RODGERS’ PLANS
By CQN Magazine on 9th December 2018 Latest News

BRENDAN RODGERS has already proved he has no place for sentimentality when it comes to choosing line-ups.

The Celtic manager insists there are NO automatic first-choices in his team selections, as CQN reported last night.

And that is why skipper Scott Brown, the onfield leader of the club’s historic back-to-back trebles in the Irishman’s first two seasons at Parkhead, will probably be on the substitutes’ bench when he draws up his plans for the final Europa League Group B encounter against RB Salzburg on Thursday night.

The Hoops need a point against the unbeaten Austrians to make certain of a place in European competition after the turn of the year. 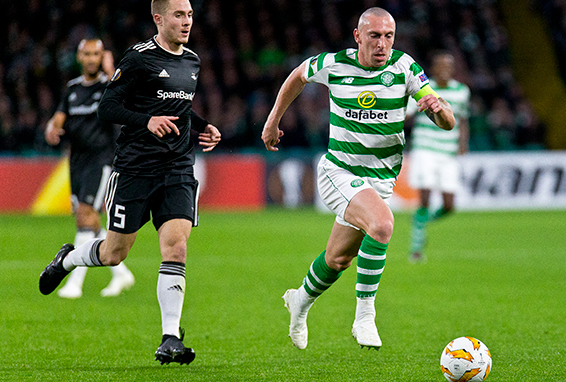 ON THE RUN…Scott Brown in action during the 1-0 win over Rosenborg in September.

But there is every likelihood the 33-year-old captain, who is out of contract in the summer, may not be on the field at the start to lead the charge.

The former Scotland international, who quit the international scene this year, has been fit and available for the last four outings since recovering from a hamstring injury sustained in the 4-2 win over Hibs on October 20.

He has started just one – the 1-1 draw at Motherwell in midweek – and was on the substitutes’ bench again for the top-of-the-table clash against Kilmarnock yesterday when the champions returned to the pinnacle of the Premiership with a runaway 5-1 triumph with James Forrest (2), Odsonne Edouard, Mikael Lustig and Ryan Christie putting Steve Clarke’s side to the sword.

Callum McGregor was again outstanding in Brown’s anchor role in the middle of the park and will almost certainly take the position in the European tie.

Rodgers said: “Listen, I have compassion for players, especially those that have done amazing for me. But what I don’t have is sentimentality.

“It’s clear that the level and fluency of the team is there. My job is to win games and to win titles.”

Speaking of the qualities of McGregor and Chistie, the gaffer continued: “Those two and Tom Rogic have been sensational in how they play.

“I know what Scott Brown and Olivier Ntcham can do. I know what the other guys can do, too. I will pick a team to get the result.” 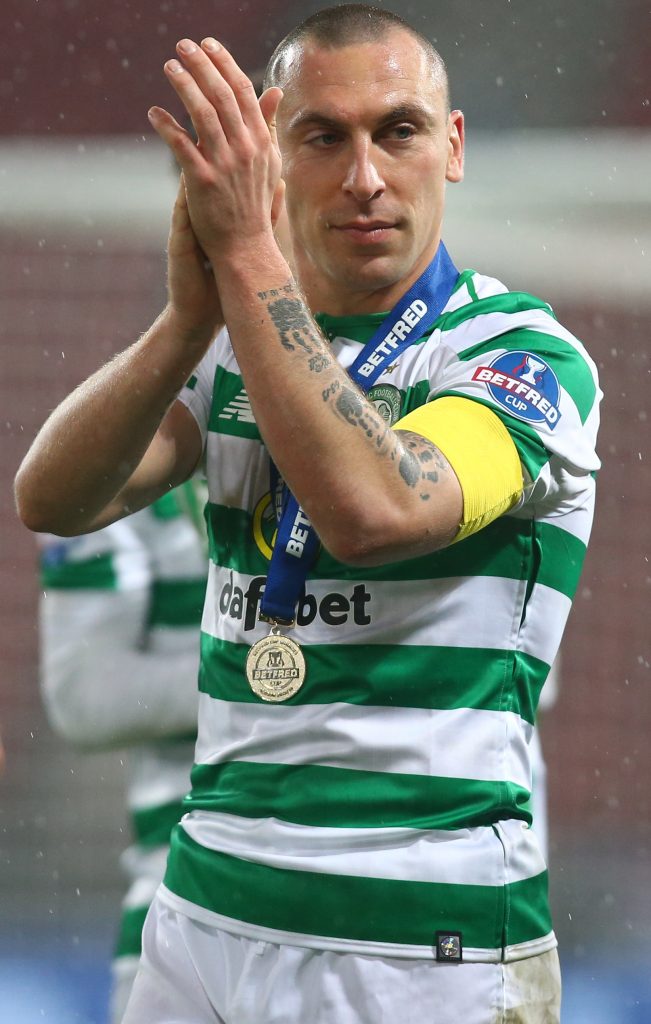 PRIZE GUY…Scott Brown applauds the fans after the 2-0 Scottish Cup Final triumph over Motherwell in May.

Rodgers reserved special praise for returning left-back Emilio Izaguirre, who started only his second match since returning to the club in August.

The Honduran came in for the injured Kieran Tierney, looked lively and alert throughout the 90 minutes and set up the opener for Forrest against a shell-shocked Killie. However, he is likely to return to the bench when the Austrians come visiting.

The Parkhead chief added: “We gave Kieran until the last minute. We left it until the pre-match meal, but he just wasn’t right. He should be okay for Thursday.

“He had a slight issue in and around his groin area. He is a boy who wants to play every second of every game, but sometimes you have got to think sensibly on it.

“We could have put him in, but it would have been a risk. There is no need when we have someone like Emilio, who, I thought, was outstanding.”