Celtic Quick News on News Now
You are at:Home»Latest News»‘WE LIKE TO BE AGGRESSIVE,’ CALMAC
By CQN Magazine on 9th December 2018 Latest News

CALLUM McGREGOR hopes to make it hell in Paradise for RB Salzburg in the final Europa League Group B game under the lights in the east end of Glasgow on Thursday evening.

Celtic go into the encounter knowing a draw will ensure European football after the turn of the year.

The Austrians have already qualified with a 100 per cent record, including a 3-1 win over the Hoops in October, but they can expect Brendan Rodgers’ men to go full throttle at Parkhead.

Midfielder Callum McGregor, who has emerged as a key component in the Irishman’s plans for continued success at the club, insisted there is no chance the champions will play for a point to guarantee a last-32 place in the competition.

The Scotland international said: “You can’t play for a draw at Celtic Park. We’ve got to be aggressive in the game, go out there and try to win it.

“We’re in a great position where a point will take us through, but the high-octane atmosphere at Celtic Park doesn’t really allow you to sit back. 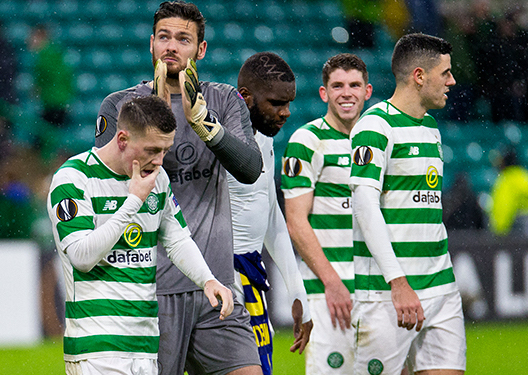 “Neither does the way we play – we like to be aggressive and play at a high tempo.”

The team backed up McGregor’s words yesterday when they started at a whirlwind pace against Kilmarnock, who arrived at Parkhead as Premiership leaders and left eith their heads bowed following a one-sided 5-1 beating.

And the 25-year-old Glaswegian is hoping for an action replay against Salzburg to underline the powerful performance in the 2-1 triumph over their Red Bull stablemates Leipzig last month was no flash in the pan.

He said: “We had been searching for a big European win and that was probably it for us. We were at home, on the front foot and we were excellent that night.

“A display like that gives you confidence and you just carry that on. When you beat an opponent at such a high level in terms of both the quality of player they have and the amount of money they have spent, it really spurs everyone on.

“That was just about as good a night as I’ve had. The experience as a whole, with the light show and everything, probably added to it for the supporters, too.

“I think we are in a real good place going into this game. We have been excellent recently and we need to try to get the win to take us through.”

McGregor added: “It’s a massive boost to have Broony back. He gives us that presence in the middle of the park and when things are getting tough, you need someone to be at the forefront of the team.

“He has always been that for us and it’s great to play alongside him.”