JOZO SIMUNOVIC insists he is not intimidated by RB Salzburg’s superb record as Celtic prepare to welcome them to Parkhead for the final Europa League Group B encounter on Thursday night.

The Austrians have already qualified after winning their five previous games in the section and the Hoops require one point to guarantee European football after the turn of the year.

And Croatian central defender Simunovic is ready for the challenge against a side who are unbeaten in all competitions this season with 24 wins and four draws in their 28 games.

The Hoops have already overcome Salzburg’s Red Bull stablemate Leipzig, currently third in the Bundesliga, in the east end of Glasgow last months when goals from Kieran Tierney and Odsonne Edouard gave them an inspirational 2-1 triumph.

Simunovic, who is likely to line up alongside his fellow-countryman Filip Benkovic in the absence of hamstring victim Dedryck Boyata, is impressed by the Austrians’ record, but said: “That’s a motivation for us, we want to stop their run if it’s possible. 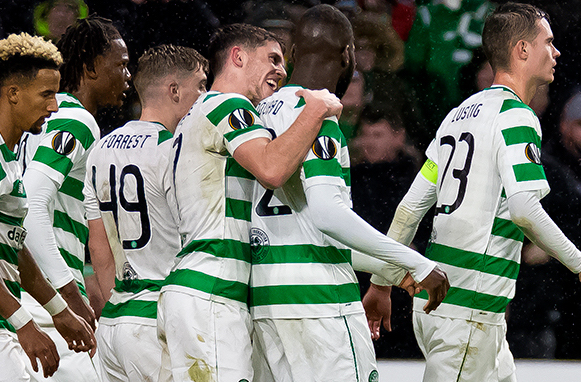 “It’ll be an amazing atmosphere, it’s the final game in the group and it’ll be big.

“Carrying on this run in Europe would be good for us, it means a lot to get through the group stage and still be in the competition into the new year.

“So, we’ll be giving everything on Thursday night to achieve that. Of course, it won’t be easy because Salzburg have been the best team in the group so far, for sure.

“But our stadium’s no favourite for any team to come to and we want to win this game, simple as that.

“A draw might be enough, but we’re not thinking about that – we have to play for a win.

“Will that send out a message? It’s not about a message, it’s more about giving everything that we can give ourselves. If we give our best, we can show our best.”