JAMES FORREST scorched in his 11th goal of the season with his thunderous angled drive into the roof of the Kilmarnock net as Celtic romped to a 5-1 triumph at the weekend.

The on-fire winger edged to within six goals of last season’s career best of 17 and at this rate the Scotland international attacker will smash that record in the forthcoming weeks.

Forrest has now set his sights on unbeaten RB Salzburg who will provide the final Europa League Group B test at Parkhead on Thursday night where Brendan Rodgers’ men know one point will be enough to take them into the knock-out stages of the competition after the turn of the year.

The Austrians, though, are looking to make their own piece of history in the east end of Glasgow when they will attempt to become the first team in the tournament to claim 18 points from six group matches. 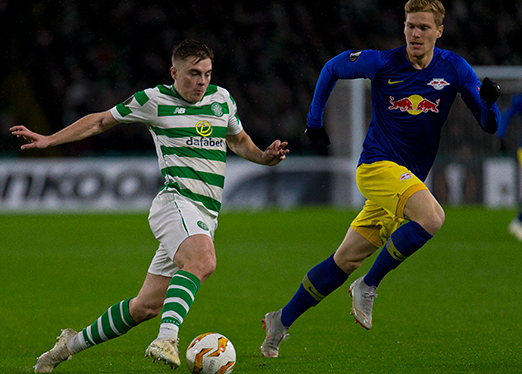 And Forrest warned against suggestions the visitors, who are unbeaten in all competitions in this campaign with 24 wins and four draws from their 28 outings, easing off because they have already qualified.

The  27-year-old raider insisted: “We have been in that situation before in league games when people look at us and say that we don’t need to win a game.

“It’s rubbish. It’s maybe a bit different because there isn’t the same pressure upon you, but a professional football player never walks into a game thinking that they are just turning up for a kickabout.

“You have your own professional pride. You are playing for a team and for a jersey. You don’t know if there will be players starting the game who have a point to prove to the manager or whatever.