Celtic Quick News on News Now
You are at:Home»Latest News»BROONY’S DATE WITH DESTINY
By CQN Magazine on 24th May 2019 Latest News

SKIPPER Scott Brown has declared himself fit to lead Celtic out against Hearts at Hampden tomorrow afternoon – and into Scottish football history.

The Hoops are just 90 minutes away from winning their NINTH successive domestic honour to complete an extraordinary and unprecedented treble treble.

Midfield anchorman and inspiration Brown insists he is ready to face Craig Levein’s men in the Scottish Cup Final, despite missing training yesterday.

The 33-year-old competitor also sat out the weekend triumph over the Tynecastle outfit on the day the champions were presented with their eighth successive title.

Now, with the team on the cusp of something remarkable, he is ready to play through the pain barrier following a foot injury sustained in the 3-0 win over Aberdeen at Pittodrie almost three weeks ago as Neil Lennon guided the team to this term’s crown.

Brown, speaking to the Daily Record, said: “Looking forward to Saturday. I had a couple of days off training due to the luxury of us having won the league with a couple of weeks to spare, so I got some time off to chill and make sure I’m okay and ready to go.” 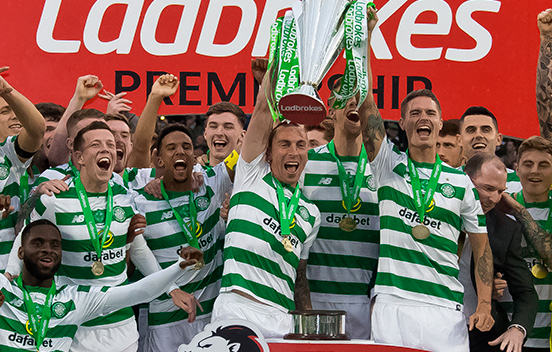 The influential captain was on target in Neil Lennon’s second comeback game when they overcame Hibs 2-0 in the quarter-final of the national competition at Easter Road in February.

However, there is still uncertainty over the Irishman’s long-term future in the Hoops dug-out.

Brown added: “If he stays, the lads would love it, if he doesn’t, we’ll thank him for everything he’s done for us.

“I’m sure we’ll get time to speak to him in the forthcoming days.

“He came in when we needed him eight years ago, as well, and he was fantastic.

“He put us back on the map of winning trophies and leagues, taught everyone what it means to be a winner.

“That’s the one thing the manager is, he’s a winner. He demands high standards week in, week out.

“He loves the club more than anyone else in that dressing room. He’s got great ambitions and if he gets the job, it’s fantastic for everyone.

“If he doesn’t, he’s done a fantastic job since coming in.”