CALLUM McGREGOR has an interesting view on the supporters who are saying he should remain in the Celtic first team – even if Scott Brown is fully fit.

CQN asked the fans for their thoughts in an extremely interesting and exclusive poll last week.

Asked how he thought the skipper would react to him taking his midfield spot, McGregor replied: “I think he would just smash me in training!

“Of course, I expect Broony to come back in. He’s been a massive player for us and he has been for a number of years.

“You can see how important he has been since the gaffer came in, he seems to be that real base for the team to allow us to come and play.

“When he comes back, you fully expect him to have the same impact that he’s had for eight or nine years at Celtic.

“For people to even mention that I might keep him out after just five or six games, you’ve got to take that as a compliment.

“For me, I just need to try to take the confidence from that to keep playing well, so that even when Broony does come back in, you keep that same confidence level to go and kick on again.”

The Hoops have scored 18 goals in six matches during Brown’s enforced absence and the Scotland international ace added: “The team have been doing well, scoring a lot of goals and playing good football. Whatever the manager decides to do, that’s completely up to him.

“When Broony comes back in, hopefully I’ll just slide forward one again and that will be great.

“We all know now that the squad is so important. In the last two-and-a-half years the manager has been big on everyone in the squad playing a part and I think that’s why we’ve been so successful. 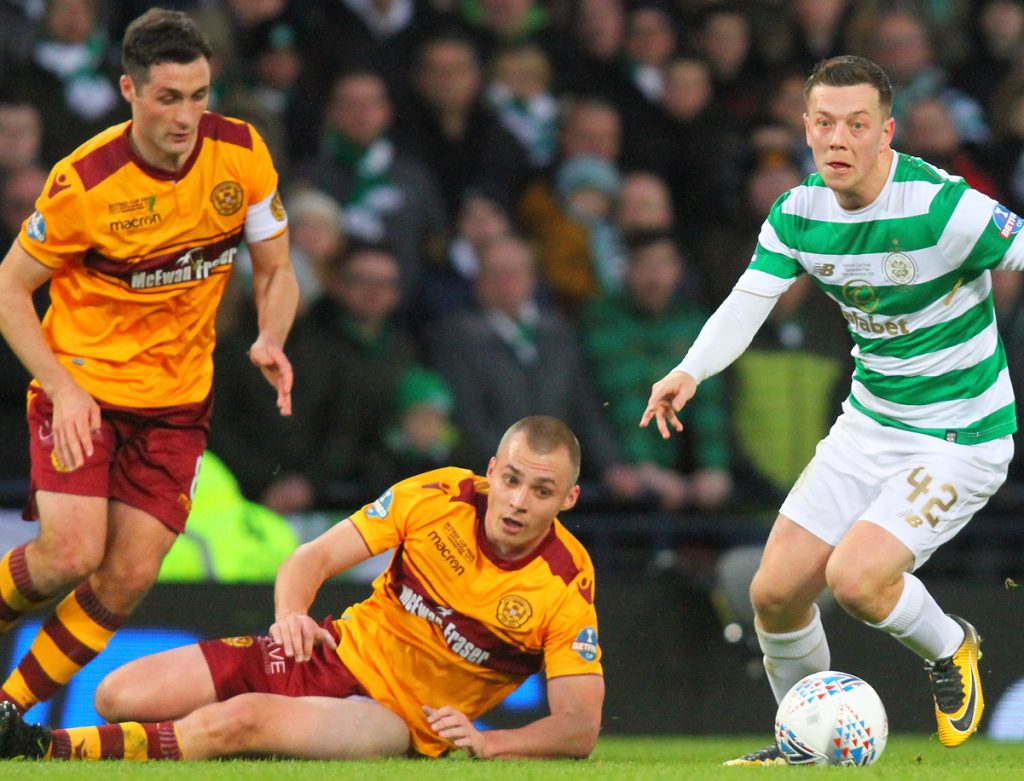 I’M IN CHARGE…Callum McGregor is poised and assured as he leads another Celtic attack in the Betfred League Cup Final win over Motherwell last season. Pic: Geo.

“It’s not a case of not being in one week and that’s you out and you aren’t getting back in.

“That’s been the real strength of the group, we have so many players fighting for positions, and, ultimately, that drives the standard up.

“With Ryan Christie coming in and doing so well, that has added to that mix of five midfield players that could all play.

“With everybody back and everybody on form, it’s a good headache for the manager.

“The gaffer has been great with me in terms of putting me in different positions and trusting me in there.

“I’ve enjoyed it and we’ve been playing some lovely stuff in terms of getting the ball quickly and letting the front boys go and do their stuff with me at the base of it.

“It’s just another position I can play.”

McGregor took over Brown’s anchor role when the 33-year-old captain limped off during the 4-2 Premiership victory over Hibs at Parkhead on October 20.

The smooth operator, normally associated with an attacking role in the line-up, was a revelation in the deep-lying position.

The versatile star fitted into Rodgers’ system as though he had played there throughout his career and there can be little doubt he added speed to the fluency of the team.

However, Brown is likely to get the nod to return by his manager once he is convinced of his match fitness.