Celtic Quick News on News Now
You are at:Home»Latest News»BRENDAN LAYS IT ON THE LINE
By CQN Magazine on 29th November 2018 Latest News

BRENDAN RODGERS will take no risks with his team selection for tonight’s vital Europa League tie with Rosenborg in Trondheim.

The Celtic boss will forget all about the Betfred League Cup Final against Aberdeen on Sunday as he puts out a line-up primed for victory against the Norwegians.

Rodgers’ men are in third place in Group B with six points – the same as RB Leipzig – but can take a massive step towards European football after the turn of the year with a triumph this evening. 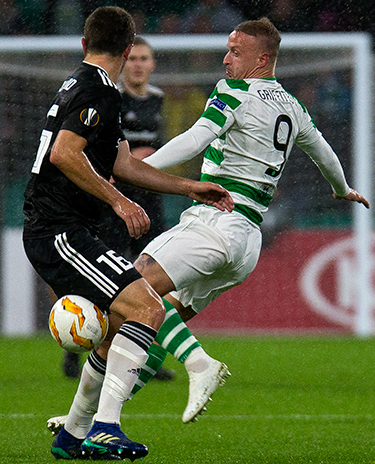 GOAL HERO…Leigh Griffiths was the Celtic matchwinner against Rosenborg at Parkhead in September.

“We understand and respect Rosenborg. They have come off the back of a celebration of being champions again for the fourth consecutive time.

“So, we know it can be a difficult game for us and that is what we will prepare for.”

A late goal from substitute Leigh Griffths gave the Hoops a 1-0 win against the Norwegians at Parkhead in September.

Rosenborg proved in the east end of Glasgow they are a well organised outfit and the champions had to work hard for the entire 90 minutes for their three points.

Rodgers realises it will be the same again on this occasion as the team play in Trondheim for the third time in two seasons.

Last term, James Forrest claimed the only strike of a tense Champions League qualifier to push Celtic into the next stage and there was a goalless draw between the sides in August.