CALLUM McGREGOR expects RB Salzburg to make it extremely difficult when they arrive at Parkhead on Thursday for the final Europa League Group B game.

The smooth Scotland international midfielder admitted he was not one bit surprised at the quality and ability of the Austrians in the first tie on their own home ground in October when they triumphed 3-1.

Odsonne Edouard netted for the Hoops in the second minute, but the match was turned on its head as the opponents swept to victory following a pulverising second-half performance..

McGregor said: “Salzburg was always going to be a tough place for us to go. They were Europa League semi-finalists last season and we knew internally how good they were.

“People outside maybe didn’t quite understand just how good a team they are, but this is going to be a totally different fixture at Celtic Park.

“We have hit a great bit of form and everybody’s tails are up. We’re high in confidence and we need only that point to get through.

“If you had told us that at the outset of the group, we would have taken it.” 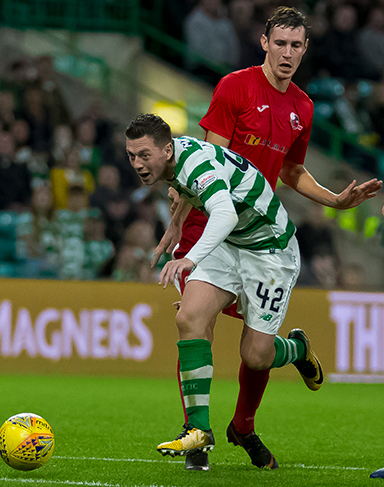 ON THE RUN…Callum McGregor charges ahead in the 3-0 win over FK Suduva in August.

McGregor, who made his 38th appearance of the season for club and country in the 5-1 hammering of Kilmarnock at the weekend, added: “When you are playing well and the team is winning, you want to stay in as long as possible.

“You never take your place for granted, you have to stay hungry.

“We have lots of games and the manager probably will change it at some point but, as a footballer at Celtic, you want to stay in the side.

“There are so many games that we need to use the full squad and you have seen just how strong our squad is.

“You look at the boys on the bench and they are capable of coming on and making an impact.

“Ryan Christie came in five or six weeks ago and he has made a massive impact.”

Celtic have another six matches to fulfil before the year’s end and then they head for a well-deserved break at their training camp in Dubai.

However, before that, there are games to be won and crucial points to be picked up – starting this week against RB Salzburg, who remain unbeaten in this campaign with 24 wins and four draws from their 28 outings.