FILIP BENKOVIC’S hopes of remaining on loan at Celtic until the end of the season have received a massive boost.

Leicester boss Claude Puel, who has already stated he is satisfied with the classy Croatian defender’s situation at Parkhead, has admitted he expects Harry Maguire to continue his career at the Midlands club – even if Manchester United reignite their interest in the player next month.

Old Trafford chief Jose Mourinho failed in two bids for the England international centre-half in August – the second in the region of £60million.

Maguire agreed a five-year extension a month later and his French gaffer expects him to complete the full season, at least.

If that is the case, Benkovic will not be recalled early from his temporary switch which will be great news for Brendan Rodgers and the Hoops with Dedryck Boyata’s future still unclear.

Puel admitted: “We cannot ever guarantee, but Harry Maguire decided this summer to remain with us, to play a full season. 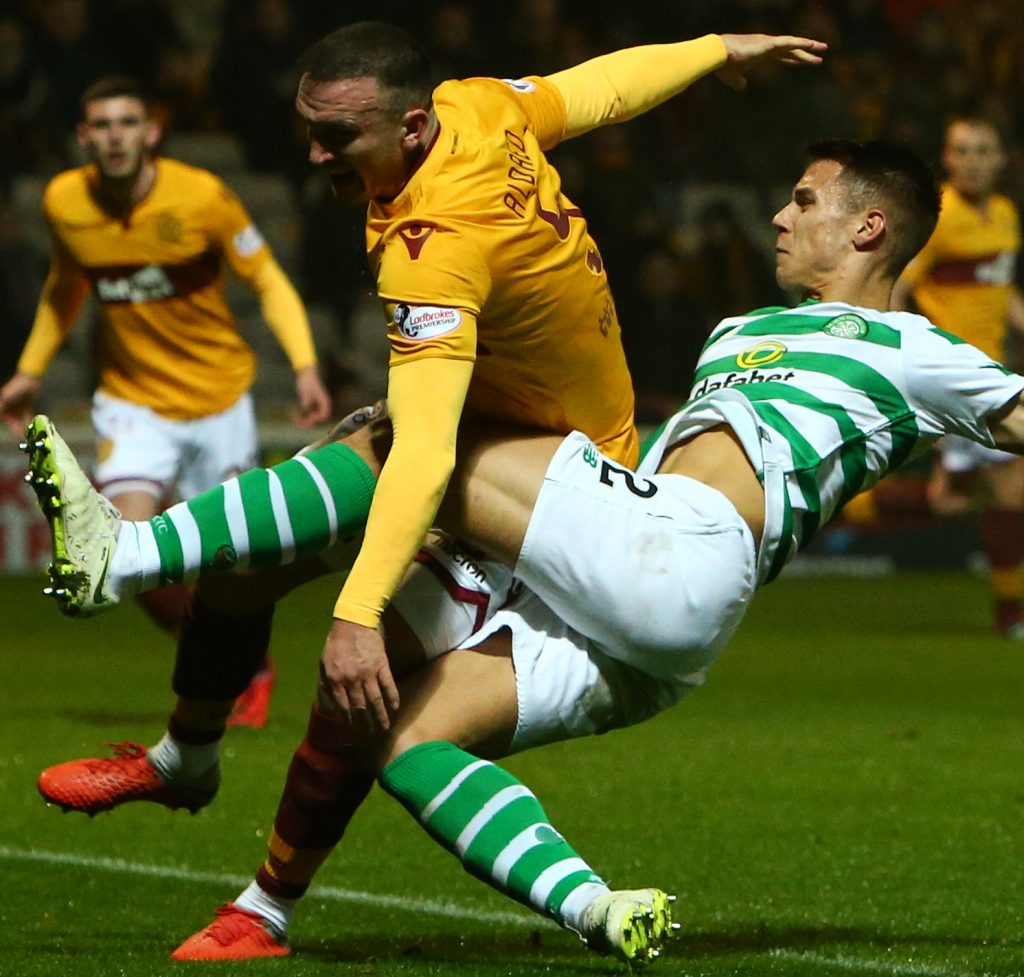 FIRST CLASS DELIVERY…Filip Benkovic gets in ahead of defender Tom Aldred to put the ball in the Motherwell net – only for it to be mysteriously disallowed. Pic: Geo.

“He is happy with us, he saw the quality of the team, the ambition, his fantastic team-mates, and, of course, for Harry or other valuable players of the club, it’s important to keep our best players until the end of the season and continue this work.

“In the past, Leicester took the right decisions. We saw this with Riyad Mahrez last season also.

“It was important to maintain the squad until the end of the season, to keep all our players to player and perform.”

Benkovic has become a favourite with the Celtic support and has linked well with Boyata and now faces a run of games alongside his fellow-countryman Jozo Simunovic with the Belgian star sidelined following a hamstring injury sustained in the 1-0 Betfred League Cup Final victory over Aberdeen.

The Under-21 international, who cost Leicester £13million when they signed him from Dinamo Zagreb in the summer, insisted he would like to continue with the Scottish champions, as CQN reported at the start of the month.

He said: “I really want to be here all season and I want to win trophies for Celtic. To enjoy that success with the fans would be priceless.”