Brendan Rodgers has already guided the champions to an unprecedented  double treble since arriving two-and-a-half years ago.

Amazingly, though, the Hoops, who take on Airdrie at Parkhead this evening, have NEVER won the national competition three years in a row.

Midfielder Callum McGregor admitted: “I wasn’t aware of that fact. It’s obviously the target for this group of players and it would be another bit of history for us. It starts today and we need to be fully focused on the job.

“We know how tough these competitions are to win. It’s about putting in performances to get you to Hampden in the first place. Now it’s all about getting through the tie and seeing who we get in the next round. 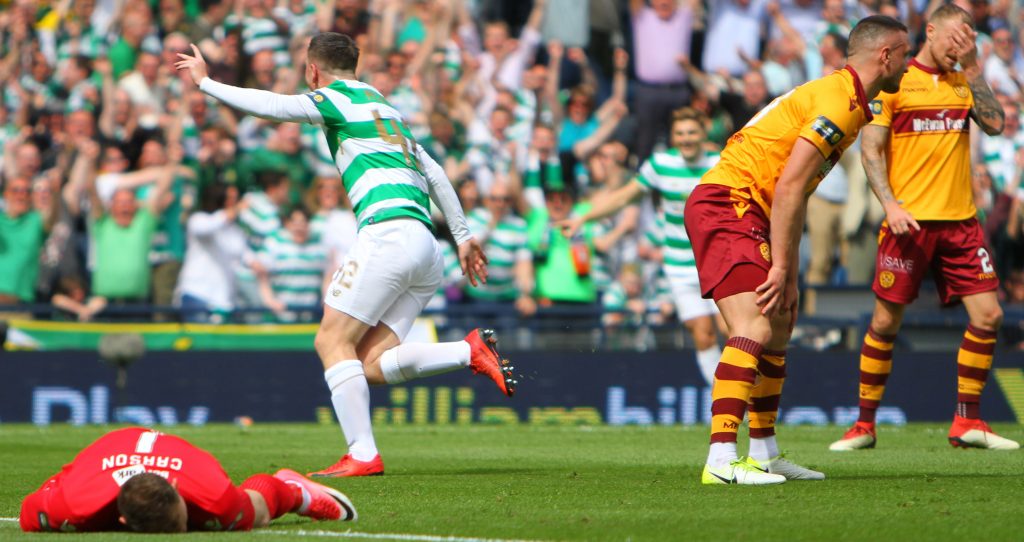 “Our Cup record has been great, 22 straight wins for Brendan Rodgers. We all know how difficult Cup-ties are. If you are not on your game then there’s obviously a big chance you could slip up and be knocked out. We’ve shown remarkable consistency in the Cup games under the manager and we deserve praise for continually bringing that level of performance.

“It shows how good the squad is, how good the manager is in setting us up to ensure there are no shocks and there is no doubt we do deserve credit.

“We know good Celtic teams in the past have slipped up, by the law of averages it can happen. It’s an incredible record to have and one we’re proud of and one we’re determined to keep going.

“We have played big games, big Finals, but we have always brought of A game.”

The visit of Airdrie this evening is also expected to offer a first glimpse of new loan arrivals Oliver Burke and Timothy Weah.

Ivorian international striker Vakoun Issouf Bayo, who has agreed a four-year deal after his £2million switch, was expected to play at some stage, but he is still awaiting the clearance of a work permit.

HAMPDEN HAPPY DAYS…McGregor is congratulated by his team-mates with the double treble on its way. Pics: Geo.

McGregor added: “Timothy has come in, done well and looks good. You can see the confidence oozing out of him. To play at this club you need to be sure of yourself and he certainly seems to be.

“His dad was maybe just before my time but I know what a great player he was. To carry that can around with you as his son you need to be a confident lad, but we need to help him.

“Timothy is still a young lad, he’s only 18 so he’s not going to come in and be the main man straight away. It’s up to the other lads to help guide him and not to expect too much from him.

“The new lads coming in will certainly provide us with different options. These boys are super quick in terms of getting in behind people and turning defenders. They are going to give us another dimension to our game.

“They know how we want to work in terms of pressing, playing fast, aggressive football and, of course, I knew Oliver briefly from the Scotland set-up. It’s been great to get to know him better.”

McGregor has played his part in the team’s back-to-back Scottish Cup successes against Aberdeen (2-1) and Motherwell (2-0) to set up the tilt at the treble.

He was a key man in the victory over the Fir Park outfit last year with an excellent opening goal that opened the way for Olivier Ntcham to make sure with a second before the interval – and the second successive domestic silverware clean sweep was delivered on another memorable May day at Hampden.